George Will, master troll: Why his new screed about dignity and the GOP cannot be serious

The right's very serious columnist has an idea for how to bring comity back to the Senate. Spoiler: It's detestable 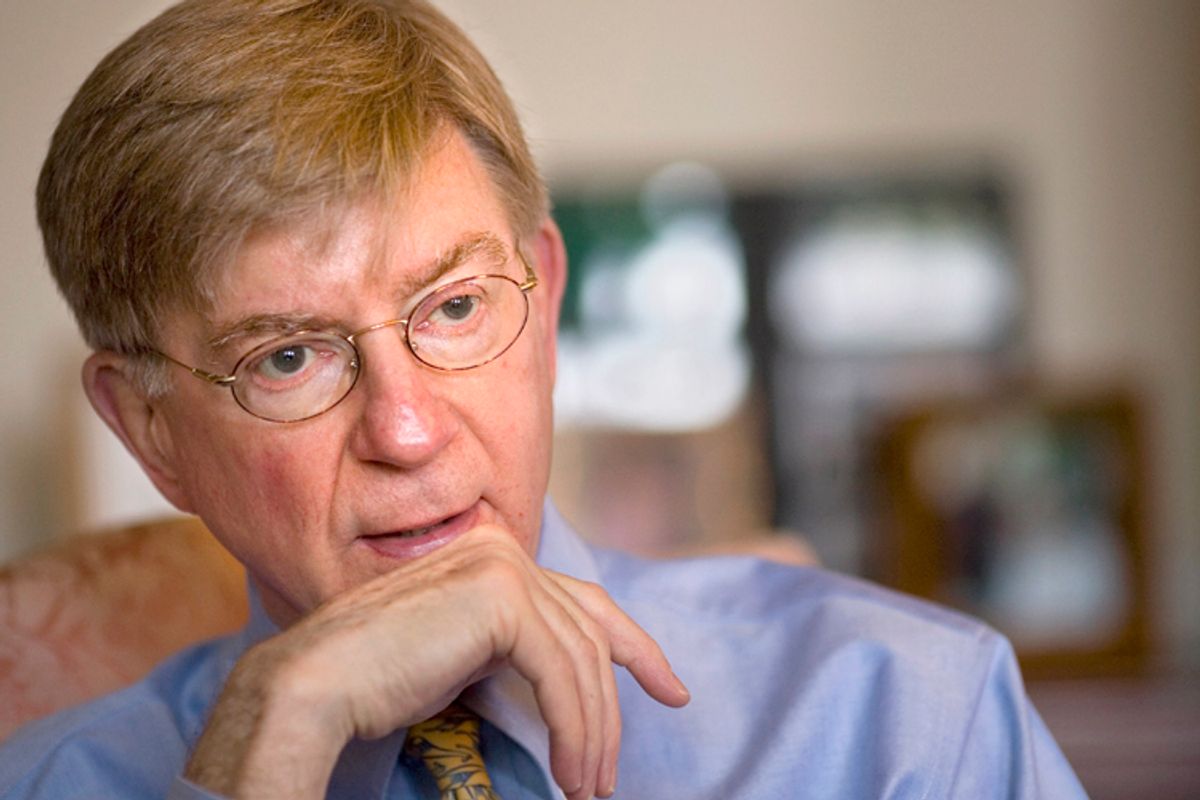 This is a lesser-of-two-evils elections. Neither political party is at all popular. Few senatorial candidates out there are particularly inspiring; they're relying more so than ever on drowning their opponents with attack ads rather than sharing inspirational glimpses of a better future. No major legislation hinges on control of the Senate. Gridlock will preclude things like tax reform or comprehensive immigration reform from happening regardless of who's managing the floor, and satisfaction with Washington will continue its gradual downward approach of the zero-bound.

Until this week, we'd heard no outside observer claim that such a lofty ideal as "dignity" was on the line in November. Political "dignity" left the station a long time ago, and it shows little interest in returning to grace us with its presence.

And yet here we have Washington Post columnist George F. Will arguing not only that "dignity" is on the ballot this November, but its return would come in the shape of Senate Majority Leader Mitch McConnell. Gaze in awe, reader, as you visit the Washington Post's opinion section from Thursday and see the headline, "George Will: Restoration of Senate's Dignity Rides on Mitch McConnell." Now is that something, or is that something? It's something, all right.

Behold the political columnist at his most credulous: "Beneath McConnell’s chilly exterior burns indignation about the degradation of the institution to which he has devoted much of his life." To Will, what motivates McConnell's pursuit of a Senate majority isn't simply the opportunity to accrue more power and achieve his career goal of being Senate majority leader. The personal considerations are secondary, negligible. It's about profound and selfless ideals: the restoration of "dignity" to the Senate, to the achievement of enduring bipartisan consensus, to open debate, amendment and camaraderie within the World's Greatest Deliberative Body. All he's trying to do is restore decency, civility and statesmanship to the finest legislative chamber known to mankind.

In January, in the most statesmanlike Senate speech in years, McConnell explained how, under Republican leadership, the Senate would be restored as the creator of consensus:

"An executive order can’t [create consensus]. The fiat of a nine-person court can’t do it. A raucous and precarious partisan majority in the House can’t do it. The only institution that can make stable and enduring laws is the one we have in which all 50 states are represented equally, and where every single senator has a say in the laws that we pass."

Will is correct about how the Founders designed the Senate: to be the forger of consensus, to cool the majoritarian impulses of the House. There are numerous veto points blocking a bill's passage from drafting to a final vote on the floor. In order to make this sort of thing work, though, senators have to work in good faith; the minority party won't abuse those veto points. It will only draw on them in extreme circumstances. Mitch McConnell is an incredibly consequential figure in Senate history already: He exposed the flaws in the Senate's design. He recognized that a minority party could act in bad faith and get away with it. There is no one more to blame for the breakdown of the Senate than Obama-era Minority Leader Mitch McConnell.

McConnell made a decision at the very beginning of the Obama presidency that he, and his conference, would filibuster every significant piece of legislation that the Obama administration proposed, before even hearing out the merits. He and his party would then criticize the president for refusing to work with Republicans. This, in turn, would give the administration a reputation for being partisan and ineffective. This plan was as cynical as it gets, was in purely bad faith, and it worked.

That the Senate has lurched away from the consensus-building body so idealized by Will and toward a more majoritarian, parliamentary system is a direct result of McConnell's tactics. When not filibustering legislation as pure political sport, McConnell and his conference were rampantly filibustering judicial and executive nominations. They filibustered nominees to court vacancies not because they had legitimate concerns over qualifications, but because they didn't want Democratic appointees on the benches. They filibustered nominees to the National Labor Relations Board, the Environmental Protection Agency, the Consumer Financial Protection Bureau and the Labor Department, to name a few, simply because they (and the particular corporate interests that fund the Republican Party) don't think these agencies should exist. It was only a matter of time before some minority leader abused the filibuster to this extent -- as a weapon to prevent the government from functioning -- and it was Mitch McConnell who finally did it. So Harry Reid responded by eliminating the 60-vote cloture threshold on executive and judicial appointments.