How to survive an apocalypse: What pop culture taught me about living through the end of the world 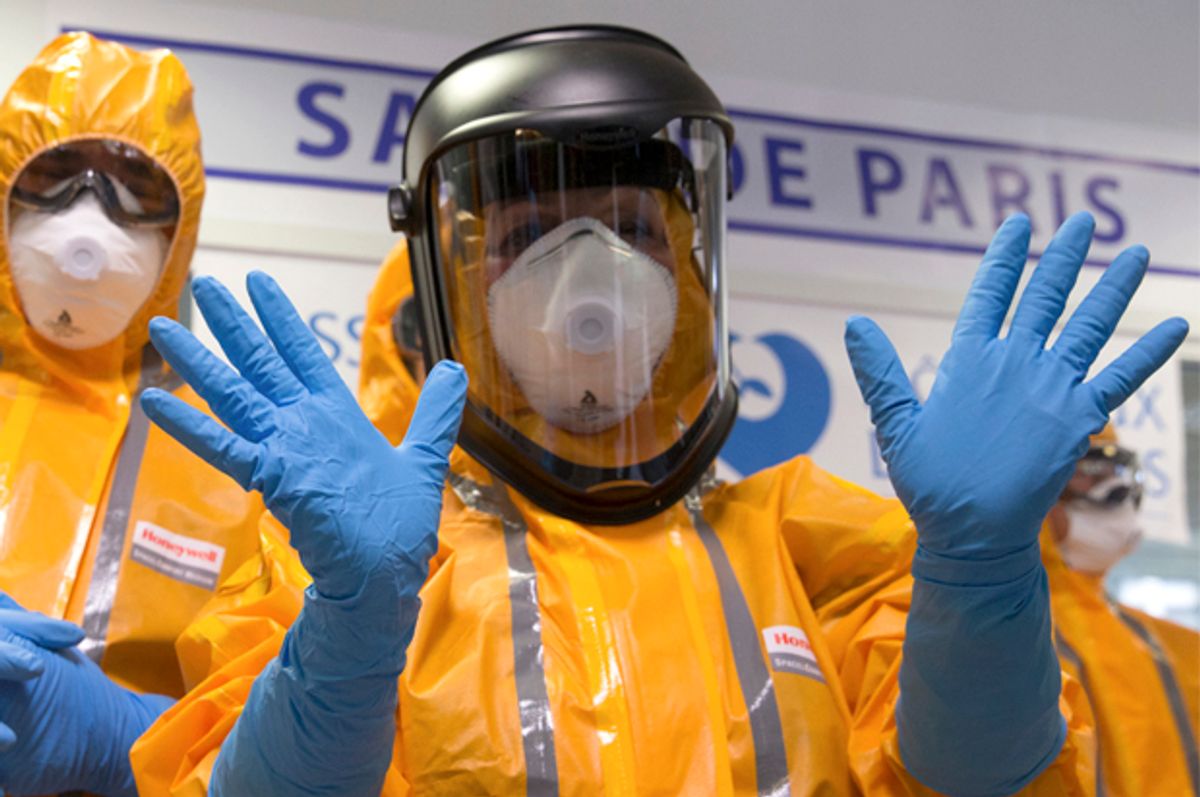 Last night, after learning that New York City has its first Ebola patient, my friend immediately texted me about survival kits. Such was the totally outsized and unnecessary panic provoked by one sick person in a city of millions. For me and said friend, surviving the apocalypse happens to be one of our favorite ongoing conversations. Just two weeks ago while we were out to dinner with our husbands, the four of us made a list of imperatives if we found ourselves in the middle of the world ending. And though we laughed it off the next day, suddenly I found myself bookmarking power banks, life straws and researching an invention called The Powerpot which charges your mobile devices and boils hot water. Then my husband and his friend started building a tree house—they said it was for the kids, but later, after a drink, my husband whispered that it was for practice in case we had to build some property. Up North. During the apocalypse.

Some of this frantic, We’re all gonna die! is kind of creepily fun—as my friend told me, “There’s a thrilling energy about the idea that we have to use all of our human skills to keep ourselves and our kids alive.” In the meantime, I’ve decided to look at some movies, television shows and books to see what tips I can gleam for the future.

“World War Z” has a few of the most terrifying Zombie attacks I’ve ever seen—hundreds of people are being killed all at the same time. But as Brad Pitt teaches us, raise your head and slow down the moment. It’s only when Brad notices something strange during a zombie attack in Israel--zombies run past an old man as well as a young boy who seems to have cancer—is he then able to string together the hypothesis that sick people are immune to the zombies.

2. "California": Have items to trade.

In Edan Lepucki’s book “California,” black market trading was run by a lone dealer named August—he traveled freely out of the forest where the two main characters, Frieda and Cal live, to the gated “communities,” where wealthier folks live. Frieda trades her bra for a Vicodin early in the book—the bras, August tells her are “made of fabric and wire, both valuable. And those little metal clasps, those annoying things? Also in demand.”

Because there’s only so many days you can eat canned vegetables and eventually those will go bad too, we can learn from Will Smith in “I Am Legend,” that farming and gathering is key. Our hero Will Smith farms and gathers vegetables in Central Park. He hunts deer in the meadow grasses of Times Square.

In “Mad Max,” a 1979 classic, where energy shortages cause mayhem, survivors made their own weapons and tools. They jack up their vehicles, turning them into supped up hot rods, killing machines that race through the desert and one of their only forms of protection. No weapons or cars? A raunchy warrior, Don’t mess with me vibe, like Tina Turner’s mesh, metal gown “In Mad Max: Beyond the Thunderdome” can work as a good deterrent as well.

5. "The Terminator": Don’t turn your life over to computers.

I know we’re completely caught up in the threat of Ebola right now, but an actual threat experts are worried about is an electromagnetic pulse, or EMP, attack. Here’s what would happen during an EMP attack, explained James Woolsey, former director of the CIA, in August. “A nuclear weapon would be detonated in orbit in order to destroy much of the electric grid from above the US with a single explosion,” basically turning our planet into a cold, dark, stone age-like place. This is where “The Terminator” comes in as one of our most useful lessons. Even my brother-in-law, a computer engineer, emphasized this point to me: “You need human oversight. You can’t turn your life over to computers.”

6. "The Walking Dead": Create a barricade.

Though the “The Walking Dead” delivers endless lessons about surviving the apocalypse, they teach us one crucial lesson: barricade everything. Whether it’s a prison, or a camp-like enclosed area, a wooden fence (even though that proved not to be such a deterrent for zombies) or a vacant house—you must find shelter.

7. "The Matrix": Open your mind and believe.

There is a moment in every apocalyptic movie where the protagonist thinks, “I can’t do this. I can’t survive this.” But someone powerful, more instrumental than you says, “Yes. Yes you can, because I believe in you.” It’s probably why “The Matrix” is my favorite post-apocalyptic movie (outside of the fact that I love the way Keanu Reeves walks when he’s angry)—because it’s about redefining your perception of self. Throughout the first half of the movie, Neo (Keanu Reeves) doubts that he’s “The One” who is going to save humanity from the alien takeover despite what his mentor Morpheus (Lawrence Fishburne) attempts to convince him. “What are you trying to tell me? That I can dodge bullets?” Neo says. “No Neo,” says Morpheus, “I’m trying to tell you that when you’re ready, you won’t have to.”

In Cormac McCarthy’s “The Road” a father and his son travel across a gnarly landscape; survivors become cannibalistic, most are suicidal, dead people are everywhere. It’s a bleak story. But one measure of hope pops up throughout—the father, no matter what, takes care of his child. He puts others before himself. The takeaway is that humanity can exist, even in the most desolate of situations.