Democrats are learning the hard way not to support plans with Social Security cuts. But at least they're learning 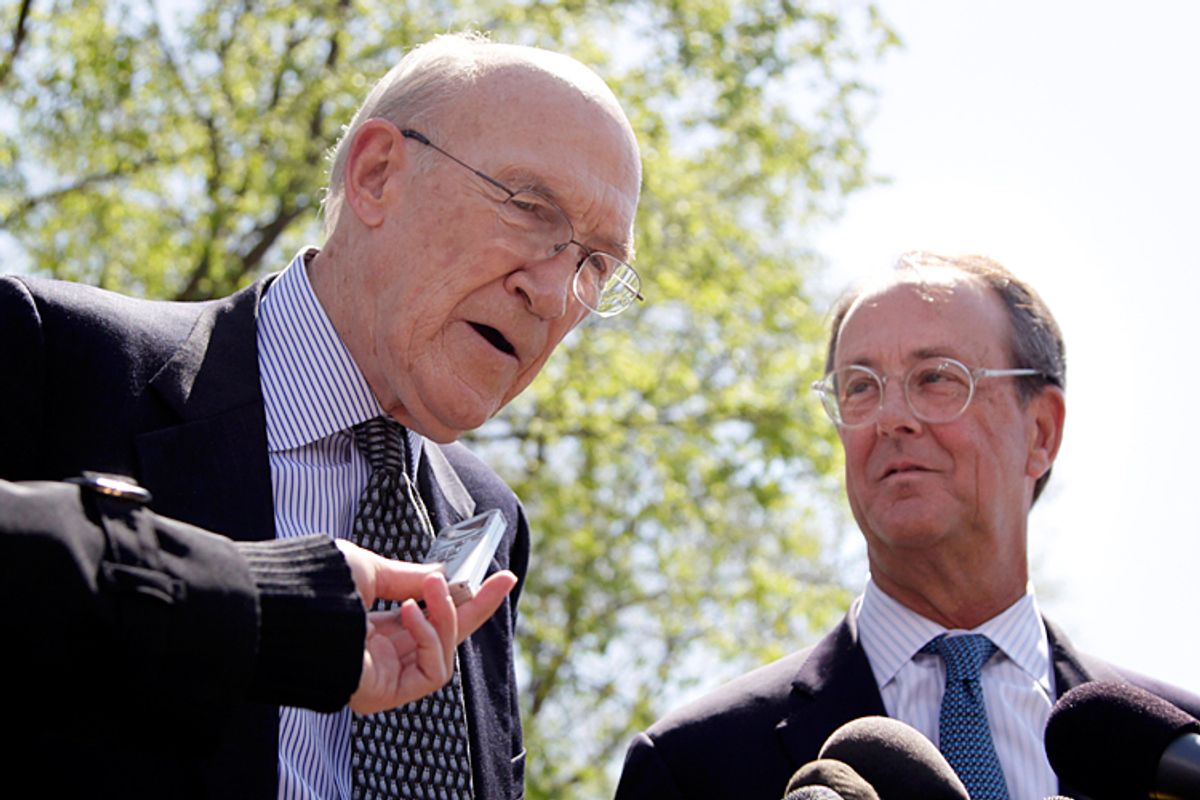 With Democratic candidates flailing nationwide, succumbing haplessly to feeble arguments about ISIS and Ebola hiding in your suburban cookie jar, pretending that they've never heard of Barack Obama, etc etc, it's hard to argue that this election season has enhanced the quality of national debate. We should be grateful that Election Day is in less than two weeks. Were it any further away, America might be too dumb to qualify as a sovereign nation capable of self-governance. We would have to admit that the whole project has been a failure and realign ourselves with the British Crown. We'll pay your tea and stamp taxes, whatever, just please, take us back!

But there may be at least one positive development to come out of this hot, cynical mess of chaotic idiocy: the end of the Simpson-Bowles deficit reduction plan as Democratic "centrists'" treasured fiscal teddy bear. They've had to learn this the hard way.

We've long been confused about why Democrats representing conservative districts and states so readily try to appeal to the "center" by embracing a plan that cuts benefits for Social Security, the most popular government program among voters left, right and center. Usually if you want to appeal to the broadest swath of voters, you don't suggest making cuts to the very program favored most by the broadest swath of voters. It's some image thing about looking Responsible, we guess. We are willing to make the tough cuts. It's a posture -- but one that will come back to bite you in the ass during election time.

The political world was stunned earlier this when Karl Rove's beloved "social welfare" non-profit, Crossroads GPS, began airing attack ads against Democratic centrists who'd offered kind words for Erskine Bowles and Alan Simpson's benevolent offering of social insurance cuts and top income tax rate reductions. Crossroads went after Sens. Mark Pryor of Arkansas and Kay Hagan of North Carolina for their support of Simpson-Bowles, arguing that the tandem were intent on lifting cash straight from the pockets of our venerable seniors. These ads, attacking Democratic candidates from the left, were extraordinarily cynical. Karl Rove, after all, had previously written that President Obama would gain credibility and popular support by embracing Simpson-Bowles. But hopefully they taught a lesson: there's nothing honorable, "centrist," or politically palatable about supporting a plan that cuts Social Security.

It's not just Rove, either. The NRCC also has been getting in on the action. Here's an ad they're running against Georgia Democratic Rep. John Barrow, a "centrist" and a survivor who's in yet another tight reelection race this fall. It mentions how "Barrow even supported a plan that would raise the retirement age to 69, while cutting Social Security benefits."

The Washington Post looks at ads like the NRCC's and Crossroads' and argues that defense of Social Security benefits represents a "change of tune" for the party that's long sought to unravel the New Deal.

Older voters typically dominate the electorate in non-presidential years, so the resort to Social Security as an issue in the Nov. 4 midterms is hardly surprising. But what has drawn attention – and charges of hypocrisy – is the decision by Republican groups to attack Democrats for supporting conservative ideas in a proposed “grand bargain” on the budget drafted by Democrat Erskine Bowles and former Republican senator Alan K. Simpson of Wyoming.

Once venerated in both parties as a good-faith proposal, the Bowles-Simpson plan calls for political compromise to rein in the $17.9 trillion national debt, which was dangerously elevated by the recent recession. Republicans would raise taxes, the theory goes, in exchange for Democrats cutting health and retirement spending. Among its proposals: trim Social Security benefits for well-off seniors, raise the retirement age to 69 by 2075 and adopt the new inflation measure, known as the chained Consumer Price Index, or chained CPI.

Both Crossroads GPS and NRCC, the party’s campaign arm for House races, have cited Democrats’ support for Bowles-Simpson as the basis of their charges on Social Security, though many Republicans — including Rove — have criticized President Obama for failing to support the Bowles-Simpson package.

There's no point in grumbling about the hypocrisy on display here from the Republican party. It's hardly a "change of tune" for Republicans to campaign opportunistically. The only thing to do is learn from this cycle: there is no benefit to be gained, whatsoever, from supporting anything that would cut Social Security. It's bad policy and bad politics.

And sure enough, after the election, Republicans will once again try to bait "centrist" Democrats. The Post looks at one possibility:

With a deadline on the debt limit looming again sometime next year, some Republicans have been quietly discussing the possibility of boosting Treasury borrowing power in exchange for adopting the new inflation measure, among other cuts to entitlement programs.

What you'll want to do, Democrats, is say "no" to that.