Vashti Bunyan: It's hard to imagine making another album

Bunyan on "Heartleap," the democratization of music, and why she writes songs about her family 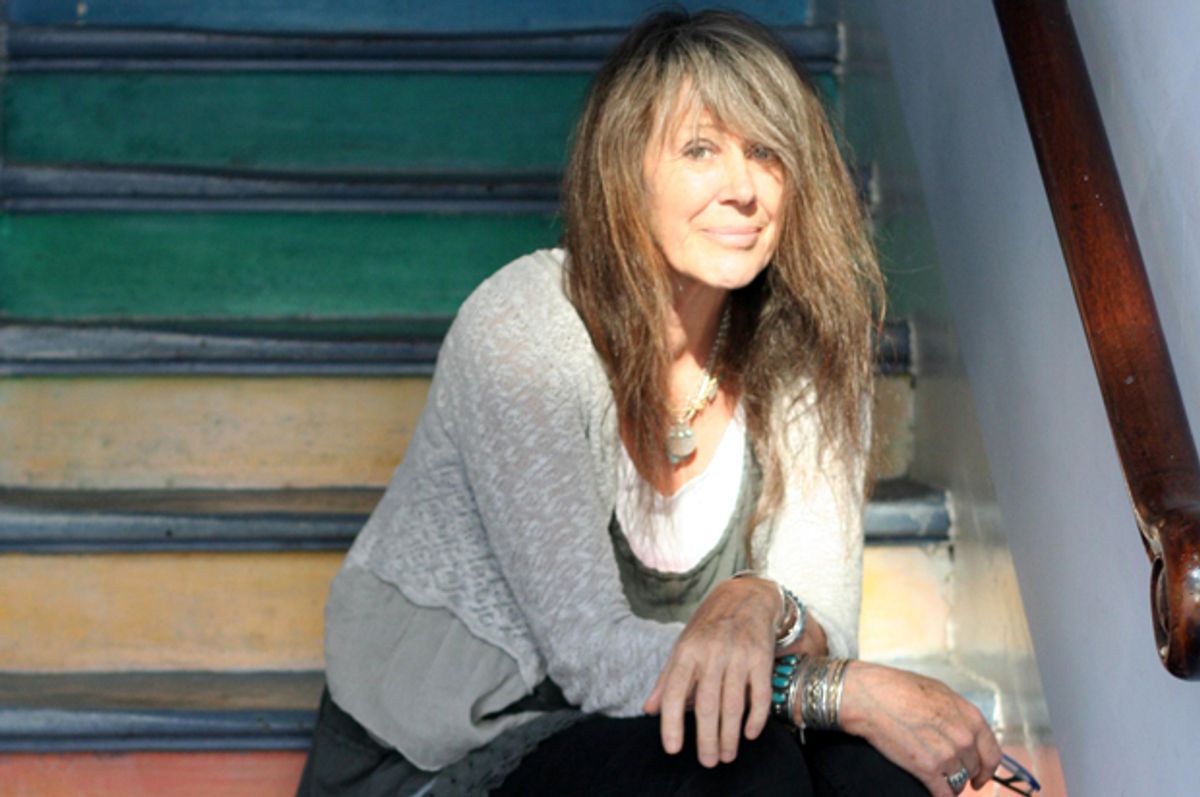 Vashti Bunyan's latest effort, "Heartleap," feels like a work of revolutionary patience, although she's the first to admit she's not quite patient. It unfurls quietly, naked and soulful, toying with listeners' expectations of dynamics and volume but never quite fulfilling them. The Edinburgh-based Bunyan's last full-length, "Lookaftering," arrived in 2005, after the reclusive folk artist's forgotten 1970 debut "Just Another Diamond Day" was rediscovered by a new century of jaded postmodernists looking for something wonderful they might have forgotten.

Bunyan -- who began her career in the '60s as a protégé of Rolling Stones manager Andrew Loog Oldham, before abandoning the scene for three decades of more fulfilling pastoral domesticity -- channeled into "Lookaftering" the unexpected affection and participation of more famous new adopters like Joanna Newsom and Devendra Banhart. But "Heartleap" is wholly her own creation: empowered by the democratizing Internet, recorded with guitars and electronics at home, on a Mac using studio software any noob can master.

In a globally warmed era of white noise far from the optimistic philosophy of The Beatles' epochal "All You Need Is Love," both Bunyan and her familial "Heartleap" are practically defiant statements of slow living. "I feel overwhelmed by the complexities we face, the powerlessness it seems that so many of us express," Bunyan told Salon. "And the difficulty in deciding which battles to fight the hardest."

Bunyan's long journey and hushed paeans to family and motherhood, the lives we all lead when the trappings of postmodernity fall uselessly away, the resilient but injured planet where we decide to live them: these are existential lessons wrapped up in three measured sonic chapters. And while she has hinted that they may have no epilogue, it seems reasonable to assume that an artist who stayed away from us for so long may ultimately be unable to resist returning to haunt our frenetic century, no matter how hard she tries.

You've said "Heartleap" is a throwback to your stripped demos of the early '60s, but now technology helps artists play any instrument without producers, engineers or pressure.

The stripped demos from 1964 that I was referring to, when I said I’d like to go back to those simple songs, were only instrumentally simple, because I had no way of taking the musical arrangements in my head out into the real sonic world. I could not read nor write music and my only instrument was guitar.

How has the technology of music changed for you from those early days, when artists needed what passed for an industry to sell them, to our brave new world, where anyone can make (and sell) something beautiful?

Getting hold of some music software in 2000 gave me the ability to write arrangements for other instruments, both real and synthesized -- and I became fascinated by the endless possibilities. It took me a while to realize I could produce my own work, but I still feel I need the "industry" and its workings to get my albums to the people I would like them to reach. Looking at the 30 years it took for my first album to gain any recognition at all, I know that the Internet has played a huge part in my finding my way to those people. It is said that this new way of making music has led to an overload -- that anyone can make music in a bedroom and have it be heard -- but that is a great democracy, and I welcome it.

How about ways in which technology has changed other parts of our lives? You famously left the industry for the treasures of home, which are thankfully becoming more valuable as global warming takes hold. But how do you feel technology has complicated our lives and consumption beyond music? "Just Another Diamond Day" is a wonderful song about seasons and the land, but even our seeds have been technologically altered. It's a brave new weird.

I like that you say "brave new weird." I so agree. Just now I feel overwhelmed by the complexities we face, the powerlessness it seems that so many of us express -- and the difficulty in deciding which battles to fight the hardest. My song "Just Another Diamond Day" was written on a train going through the Belgian countryside in 1968. There were horses ploughing the fields, there were neat haystacks in rows by old farmhouses, and I wanted to sing my heart out about how simple and beautiful life could be. Also, it was my way of saying "All You Need Is Love." All these years later, that song sadly seems so unrealistic -- and yet it has a truth in it still.

"Heartleap" takes its title from your daughter's art, which graces its cover. How does your work reflect your feelings about family, and perhaps how they change as time passes? Do you think today's art, music and other cultural production values family and home highly enough? Are we too distracted with what "The Little Prince" called "matters of consequence" to appreciate our families before they disappear?

Ah, that little book -- so influential for me from a young age. Another great influence has been some words from Andrew Loog Oldham, just a few years ago when I was getting back into the music industry machine. He told me to be careful not to forget or neglect my home and hearth. I have tried to keep his words with me as sometimes, when getting swept along in it all, it can be hard to remember that those close to you are way more important than anything "out there." "Rainbow River" was written before I had children and in that song I am imagining my child. In later songs, I referred to my actual children in "Here Before" and "Lately" -- no longer having to imagine them. There is the song "Brother" on "Lookaftering" -- and now on "Heartleap" there is "Mother" -- so yes, family figures large in my lyrics. My family is large and spread out, aged from one year old to 92, so there is always something to be attended to that keeps my feet on the ground.

All of your work is patient, but in this frenzied age "Heartleap" feels a bit revolutionary. "Across the Water" talks about drifting through the hours, where every day is every day in which earthbound routine teaches us escape. Am I on the right track?

I don’t know that those who know me well would call me patient, but maybe stubborn and determined to get there in the end. "Across the Water" was written when I was a bit lost and not knowing if I should keep going with more songwriting. The first verse is about being stuck, and the second about learning and accepting that things always change and there is no such thing as "stuck."

So has patience informed this collection of songs -- my favorite is the haunting "Here" -- and, if so, do you have some patience to spare? I know a few people who could use it.

With "Here," I enjoyed putting that song together with as few words as possible but with interweaving hums, flute and recorders. And it did take a long time and, yes, I guess some patience. Especially the last part, which I put together, note by note, to sound like a musical box. The little tines on the revolving drum of an old musical box would each have been placed by hand, and I tried to replicate this only with lines on a computer screen and mouse clicks. Fiddly. OK, I’m patient.

Finally, the buzz is this is the last release for you. Do you think you'll feel the pull to express yourself, even if not in words? And if it is the end, can you share what you learned on your journey?

I can’t imagine that I will never write any more songs, but the likelihood is that I won’t put another collection of songs together for an album. I have learned so much about the recording process in these last few years, and I am still endlessly fascinated by it, but I also know that I have, in every way, so much more to learn, to be taught and to listen to. I hope that I will never feel I am completely right about anything, but will always be able to listen.