I didn't want to become a mom -- until I did

For years, the idea of motherhood filled me with dread. Then I changed my mind -- but was it too late? 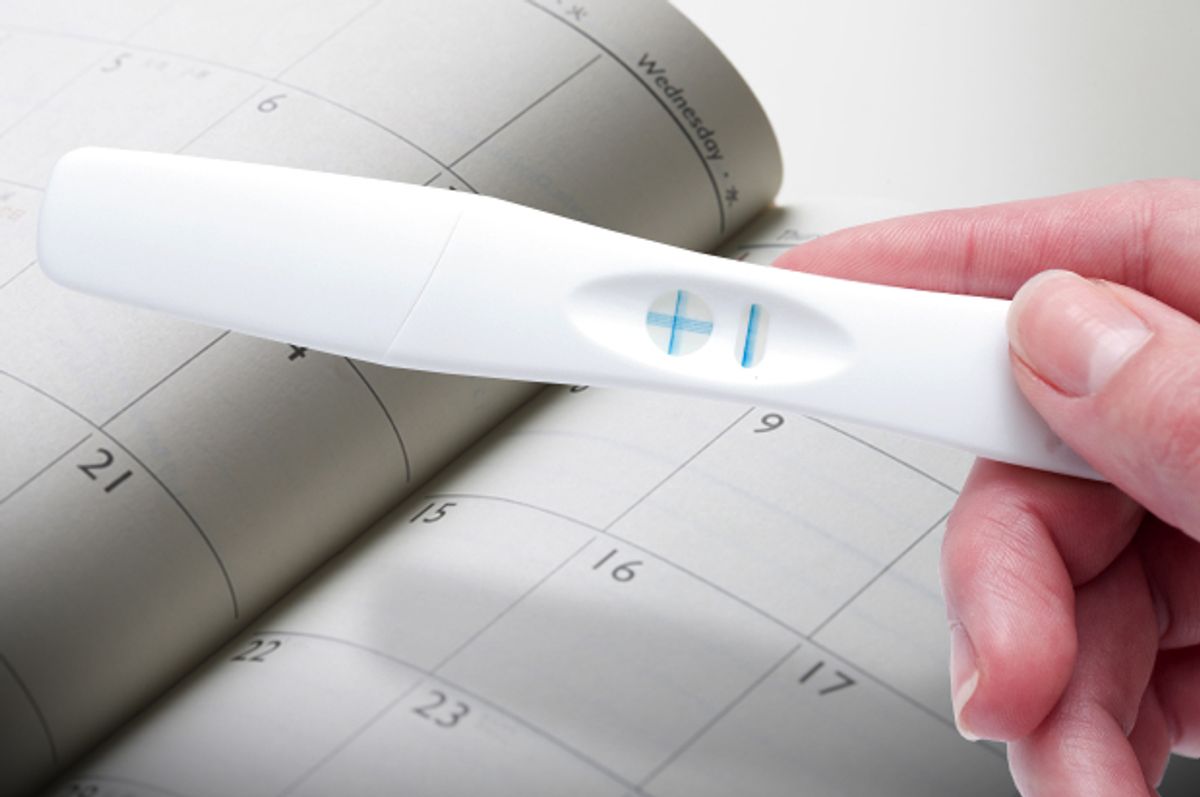 The two pink lines on my pregnancy test looked a lot like prison bars. I pictured them surrounding the jail cell I’d forever be confined to now that I was with child. I was a 34-year-old woman living in baby-friendly Brooklyn, New York, with a stable job and a loving relationship and I got pregnant right after I purposely went off the pill. I was supposed to feel lucky. All I felt was dread.

My husband, a man born to be a dad, was eager to start a family after our fifth date. He’d patiently waited 10 years for me to not quite catch up, until we both made the decision to passively pursue parenthood. In our game of reproductive roulette, I had no idea I would conceive so quickly, or that I’d feel so overwhelmed and unprepared. My partner celebrated the news. I mentally slipped on a black muumuu and began mourning life as we knew it.

At my first ultrasound, my spouse and I heard the heartbeat and received a tiny printout. I wanted to feel joy, not fear. I put the black-and-white picture in my purse in case I did. It stayed put for weeks, through subsequent sonograms and prenatal visits, slowly crumpling beneath empty gum wrappers and loose change.The image remained inside the handbag I brought to a close friend’s wedding reception, where, after the ceremony and before the main course, just shy of completing my first trimester, I miscarried. Over several painful hours, all of my angst about motherhood vanished. Instead of being relieved, I was sad and confused.

“My body knew that I wasn’t excited!” I cried to my husband. I was sure that the miscarriage was my fault. That I was being punished for my lack of maternal enthusiasm. I didn’t blame just my thoughts, but my actions in the weeks right before I realized I was pregnant. I was haunted by the five (or was it six?) cigarettes that I, a non-smoker, had casually bummed while traveling overseas. I was spooked by the vodka tonics I’d innocently consumed. The sleeping pills I’d popped for jet lag so I could keep up with my hectic job as an advertising creative director.

My doctor, my husband and conventional wisdom told me none of these early indiscretions mattered. Sometimes miscarriages happened without a reason or a logical explanation. Riddled with guilt, I still searched for one. I’d heard that people who lose a limb experience phantom pains, long after their appendages were gone. I rubbed my stomach, missing the baby I was no longer carrying.

Suddenly, women with their bulging bellies seemed to be everywhere. Parading through the produce aisle of Trader Joe’s. Marching on the adjacent treadmill at the gym. Grinning on the cover of Us Weekly. For the first time, I felt something I’d never felt before. Jealous.

I was finally on the same parental page as my partner. Rather than halfheartedly letting it happen, I actually truly wanted to get pregnant. Imagine my surprise several months later when I found out that I was. This time around, my husband and I were equally ecstatic.  So at a routine checkup when we learned that the baby’s heart had stopped beating, I felt like mine did too.

After my Valentine’s Day D and C, arguably one of the worst ways to spend the Hallmark holiday, I felt like a failure in sweat pants. I was finally ready for motherhood, but I had waited too long and missed the call for entries. This conclusion, of course, didn’t come from the blood work or genetic testing we did, but from a voice in the back of my head that scolded me for procrastinating. Even though nobody knew about either pregnancy or either miscarriage, I swore that I heard casual acquaintances and society at large tsk-tsk-tsking me.

My husband, who could have easily joined in on backup vocals, wrapped his arms around me and defended my decision to delay things. He very rationally reminded me that I’d purposely put my career, our marriage and my child-free independence before parenthood, so that by the time our baby arrived, I’d be the best mom material possible. He was right. But now I wondered if my desire to be a not-good-but-great parent would be what kept me from becoming a parent at all.

Soon after, I started peeing on ovulation sticks, seeing an acupuncturist and doing the kinds of things people trying to get pregnant and stay pregnant do. Which is to say, the kinds of things I never expected to do. I even researched different fertility options, surrogates and adoption in case we needed to explore other possibilities. So much was out of my control, yet nothing made me want to be a mother more than the thought that I might not be given the chance.

When I got pregnant for the third time, I was just as afraid as I’d been with my first pregnancy. Now, it was for totally different reasons. I didn’t want to let myself get too attached, but I was already in. So I started talking to my baby. At first, the way one might chat with a house plant, but eventually, like a secret friend. Every kick felt like a private conversation where we exchanged opinions on indie rock, spicy food and sleeping positions. As trimesters passed, I treasured every wave of nausea, every trip to the toilet. I learned to love my cankles, my double chin and my double D’s (easiest of all to embrace), because everything meant that I was literally bursting with life.

Today, at 36, my 9-month-old daughter is as much a part of me as my pancreas. Or more accurately, my heart. When I lift her up like a rocket and stare into her sparkly, saucer eyes and she giggles like a madwoman, I can’t imagine her not being exactly who she is. If she’d come at any other moment, she wouldn’t be her. Both of my miscarriages led me directly to the child I was meant to have and made me the mother I am. I’m pretty far from perfect, but I’m the mother I always hoped I’d be. My husband recently asked me if I wish we’d started sooner, seeing how deeply in love I’ve fallen. I told him not for one second. Our little girl was worth the wait.

Rachel Birnbaum’s personal essays have appeared in The New York Times, Newsday, New York Press and Salon. She works in advertising and lives in Brooklyn, NY. Follow her on Instagram and Twitter @rayrayawake.