A string of leaks to the media protecting Darren Wilson are part of a very big problem. Here's the sordid history 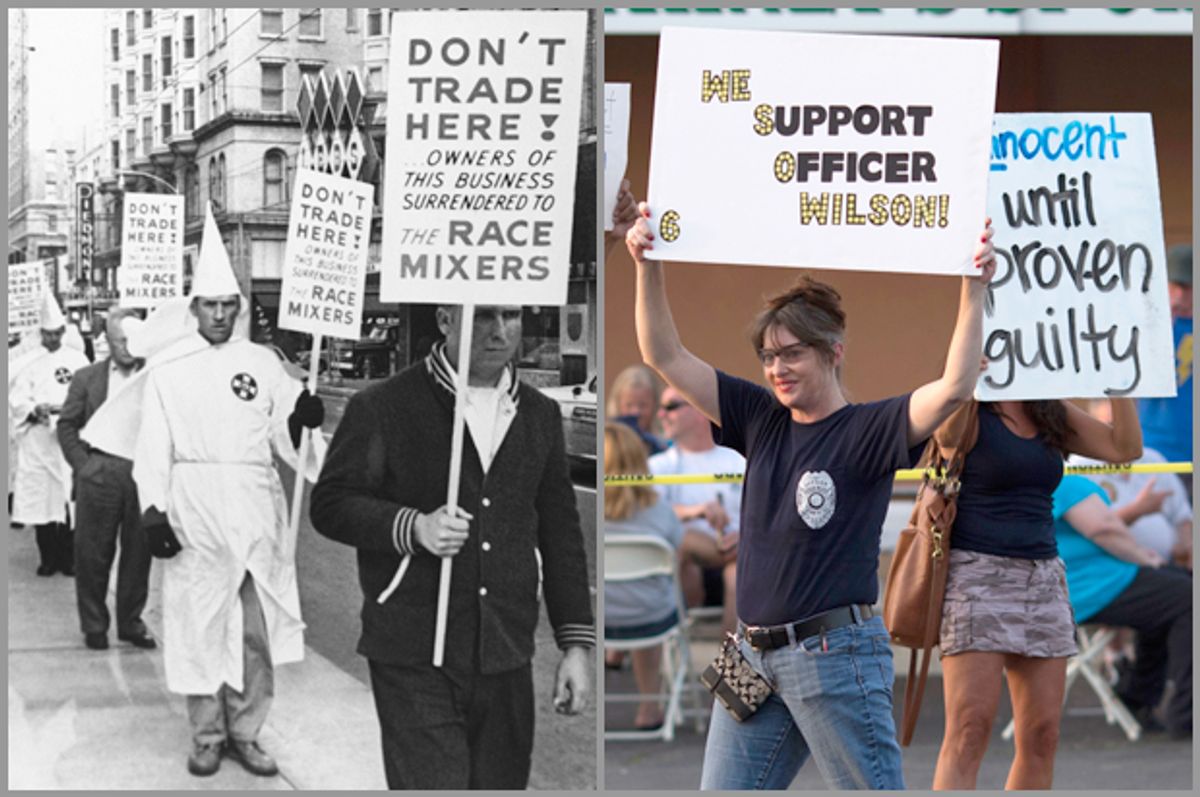 On those rare occasions when it makes a real effort to grapple with the raw brutality of Jim Crow, the American mainstream media usually returns to a particular set of images that, by their very nature, are jarring and extraordinary: the burning cross, the hangman’s knot, the Klansman on horseback. This isn’t a bad thing; you can’t understand Jim Crow without understanding the significance of the Klan, for example. But it’s not an entirely good one, either.

The problem with focusing so much on these potent symbols is that it can lead us to a mistaken conclusion: namely, that the only evil of Jim Crow (and U.S. white supremacy in general) was manifested in these menacing, otherworldly forms, rather than in the system’s more humdrum and everyday modes of dehumanization. The problem with the former is easily solved. Today, the burning cross, the noose and the Klansman are all enemies of polite society. But those subtler manifestations of apartheid — the interlocking social networks and political institutions that together worked to disempower black citizens and deny them their rightful place as full members of the community — have proven more difficult to shake.

The proof is all around us, but if you want a more tangible example, the news out of Ferguson, Missouri, is happy to oblige.

After briefly turning the small, hard-luck suburb into the center of the world, the media has as of late been paying much less attention to the story of Michael Brown’s killing, mostly because people on both sides of the controversy have been stuck in an anxious holding pattern, waiting to see if a county grand jury will bring charges against Officer Darren Wilson. Many observers, and seemingly most pro-Brown Ferguson protestors, expect it will not; and many are already positioning themselves to win the war for public opinion that will ensue the moment the charges (or lack thereof) come down.

That’s the tense atmosphere into which the New York Times and the St. Louis Post-Dispatch recently dropped two bombs, both of which cited unnamed government sources saying evidence suggests Wilson’s claim to have shot Brown only after the youth tried to nab his gun — and to have killed Brown only after the wounded and unarmed teenager decided to charge him head-on — is indeed the case, in spite of what multiple eyewitnesses have said. As more than a few people noticed, the leaks all seemed to go in a certain direction (Wilson’s). Rather unnecessarily, the Brown family’s lawyer assured the media that the leaks weren’t coming from them. More necessarily, a forensic pathologist quoted extensively in the Post-Dispatch story said her remarks were taken out of context.

At this point in the story, anyone familiar with the dynamics of American race politics would suspect that like countless racially stratified and unharmonious small-town authorities before it, the establishment in Ferguson was doing its damnedest to quash an embarrassing investigation and protect one of its own. Perhaps aware of the likely widespread nature of that view, former St. Louis County Police Chief Tim Fitch was swiftly thereafter quoted speculating that the leaks weren’t coming from Ferguson authorities, but rather were the result of the Department of Justice’s machinations. Because the feds recognize that it’s “probably very unlikely” that Wilson will be charged, Fitch said, the DOJ was selectively leaking evidence in order to “let people down slowly” before the announcement of no charges being filed came.

If that sounds a bit odd to you — Fitch’s contention that Attorney General Eric Holder had previously decided to “take over the Ferguson Police Department” is a warning sign — you’ve got some prestigious company. Barely more than a day after Fitch made news, the DOJ was quoted in the Los Angeles Times and elsewhere expressing serious unhappiness over the leaks, saying they were “irresponsible and highly troubling” and describing them as “an inappropriate effort to influence public opinion about this case.” Needless to say, Ed Magee, the spokesperson for the county prosecutor’s office, has denied responsibility entirely. “There’s really nothing to investigate,” Magee told the Times. “All we can control is people in our office and the grand jury, and it’s not coming from us or the grand jury.”

As you can probably tell, I’m highly skeptical of the idea that Eric Holder’s DOJ has all along been playing a secret shell game, pretending to enter into the Ferguson maelstrom in order to sideline local authorities it deemed biased and/or incompetent while, behind the scenes, doing everything it could to protect Wilson and discredit Brown. But even if we end up discovering that the Department of Justice was playing both sides, it would make no difference to the bigger, lingering problem Ferguson revealed — the way the legal and political institutions in much of America still treat black American citizens as if they were separate from the rest of the community, a force to be contained, coerced, managed. (In fact, if Fitch is correct, and the DOJ is trying to “let people down slowly,” it would actually strengthen the point.)

More important than these specific leaks, however, is the way that the behavior of officials throughout the power structure of Ferguson have responded to the protestors as if they were a dangerous, alien presence rather than American citizens who have full and equal rights just like the rest. Instead of trying to reach an accord with Michael Brown's supporters, the Ferguson establishment is trying to preemptively position itself as a victim, hoping it can win the war for public opinion if and when the chaos of this summer reignites. This isn't because the overwhelmingly white men and women in positions of authority in Ferguson are especially villainous, but rather because Ferguson, like so much of contemporary America, remains very much the town that racist social engineering built, one in which the unspoken assumption is that black people can never be equal members of their own community.

So, to return to my earlier argument about the visuals of Jim Crow, let’s indeed celebrate that the most extravagant symbols of that terrible era — the burning cross, the noose, the Klansman’s hood — are now widely considered to be ugly and taboo. For a country in which, not so long ago, the lynching of black men was considered a source of public entertainment, that's no small thing. But let’s also keep in mind that in so far as it was a social and political system that fundamentally denied black people membership in the larger community, Jim Crow still persists.