Thomas Frank: "We are such losers"

Liberals yearn to believe in post-ideological blank slates -- and get disappointed every time. Will we ever learn? 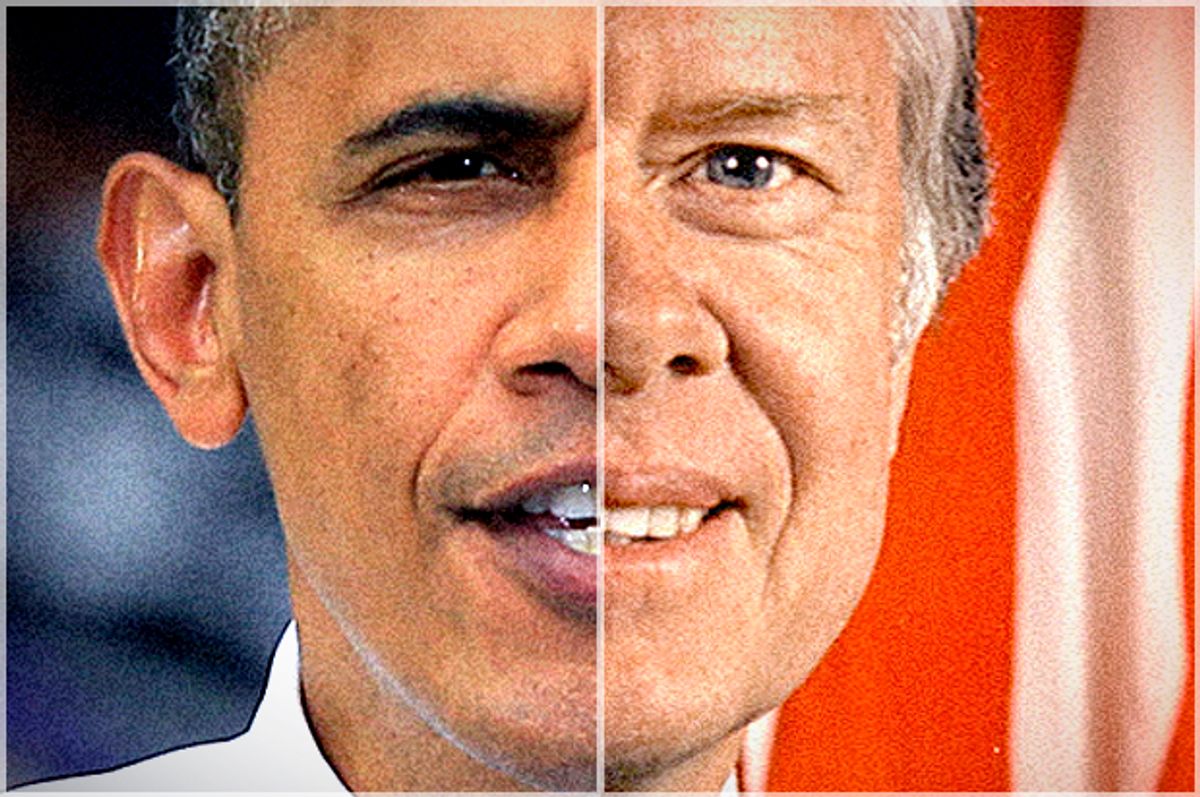 That we are living through an endless repeat of the 1970s is becoming more apparent all the time. Nostalgia and retro culture burn as brightly today as they did in the era of “Happy Days” and “American Graffiti,” while distrust and suspicion of government hover at near-Watergate levels. Disaster dreams are everywhere, just as they were in the days of “The Towering Inferno” and Three Mile Island. The culture wars, the 1970s’ No. 1 gift to American politics, still drag on and on, while the New Right, the decade’s other great political invention, effortlessly rejuvenates itself. Jerry Brown is governor of California again. The Kansas City Royals are a good team.

No reminiscence of that decade of malaise would be complete without mentioning Jimmy Carter, the president who—fairly or not—will be forever associated with national drift and decline and all the other horrors that were eventually swept away by the Reagan magisterium. Indeed, comparing the hapless Carter to whoever currently leads the Democratic Party remains a powerful shibboleth for American conservatives, and in 2011 and 2012 Republicans indulged in this favorite simile without hesitation.

I pretty much ignored the Carter-Obama comparison in those days because it was so manifestly empty—a partisan insult based on nothing but the lousy economy faced by both Carter and Obama as well as the recurring problem of beleaguered American embassies in the Muslim world. (Get it? Benghazi=Tehran!) More important for Republican purposes was the memory that Jimmy Carter lost his re-election campaign, which they creatively merged with their hopes that Obama would lose, too. Other than that, the comparison had little connection to actual facts; it was a waste of trees and precious pixels.

What has changed my mind about the usefulness of the comparison is my friend Rick Perlstein’s vast and engrossing new history of the '70s, “The Invisible Bridge.” The book’s main subject is the rise of Ronald Reagan, but Perlstein’s detailed description of Carter’s run for the presidency in 1976 evokes more recent events so startlingly that the comparison with Obama is impossible to avoid. After talking over the subject with Perlstein (watch this space for the full interview), I am more startled by the similarities than ever.

In 1976, when Carter shocked the political world by beating a field of better-known politicians for the Democratic presidential nomination, the essence of his appeal was pure idealism—idealism without ideology, even. He presented himself, Perlstein writes, as an “antipolitician,” a figure of reconciliation who could restore our best qualities after the disasters of Vietnam and Watergate.

Jimmy Carter’s actual politics were ambiguous, however, in a way that should be very familiar. His speechwriter James Fallows wrote in 1979 that he initially signed up with the candidate out of a hope that he “might look past the tired formulas of left and right and offer something new.” As with Barack Obama, who promised to bring a post-partisan end to Washington squabbling, Jimmy Carter’s idealism was not a matter of policies or political ideas but rather of the candidate as a person, a transcendent figure of humility and uprightness.

Idealists of all kinds saw what they wanted to see in Jimmy Carter in 1976. Just as Barack Obama is, famously, a “blank screen on which people of vastly different political stripes project their own views,” so presidential candidate Jimmy Carter tried to be “all things to all people,” Perlstein writes. Carter denounced elites in a memorable way in his speech to the Democratic convention that year, but when asked where he stood on the political spectrum, according to an article Perlstein quotes from The New York Times, Carter would say things like, “I don’t like to categorize, I don’t see myself as liberal or conservative or the like”—then proceed to suggest that he was a little of both.

Nevertheless, liberals in 1976 steadfastly maintained that Carter was one of them—to the utter exasperation of the journalists who had studied Carter’s statements and positions over the years. The man from Plains, Georgia, was no progressive, the journalists argued. But in those days, nothing was capable of shaking the faith of his disciples.

That faith was something to behold. “They yearned to believe,” Perlstein writes of Carter’s fans. Among the smitten were hardened journalists like James Wolcott and Hunter S. Thompson (!) as well as the leaders of some of the big labor unions, in those days the bulwark of American liberalism.

Once the election was over, the pundits of the day amused themselves—just as they do today—by speculating that the GOP was permanently done for. Today, it’s demographic change that is supposed to be slowly crushing the right; back then there were similar theories. In 1977, a columnist for the Boston Globe added up all the constituencies that the GOP had alienated over the course of the decade and wrote that the “Grand Old Party has begun to face the unpleasant fact that it risks becoming a permanent opposition dwarfed by a much larger ruling party.” Another notion, which Perlstein describes, was the widespread belief that the rise of the Now Generation would drag the whole spectrum of opinion leftward—just like millennials are expected to do today.

As president, of course, Carter wasn’t much of a liberal at all. Although economic conditions were not good when he took over, the stimulus he proposed was far too small because, like another Democrat who comes to mind, Carter was always drawn to fiscal responsibility and “hard choices.” “He has emphasized balancing the budget as if it were more important than reducing unemployment,” wrote the columnist Joseph Kraft in 1977.

President Carter did sign a big capital-gains tax cut, and he went on to deregulate the airlines, the trucking industry and oil prices. However, when the AFL-CIO proposed a bunch of labor-law reforms including what we now call “card check,” Carter first diluted the proposal, then allowed it to die in the Senate without straining himself on its behalf, a scenario that was replayed by Obama virtually move for move.

Like Barack Obama, Jimmy Carter was drawn instinctively toward austerity—keeping the White House thermostat down and advertising his personal devotion to domestic thrift by donning a cardigan in a televised chat on the energy crisis. In the fight against inflation—the real deal, not the imaginary kind we fear today—Carter demanded spending cuts and made an effort to balance the federal budget. His hand-picked Federal Reserve chairman, Paul Volcker, jacked interest rates up to unprecedented levels, which had the unfortunate effect of crushing the economy. (One of the few supporters of Volcker’s efforts was the West German government, obsessed then as now with austerity and inflation-fighting.)

Along the way Carter managed to antagonize all manner of liberal interest groups, especially organized labor, even though union members had been instrumental in electing him in 1976. According to the bien pensant thinking of the 1970s—and also of the 2010s—such groups were merely relics of a bygone era. Unfortunately for Carter, however, certain of those dinosaur labor unions went on to support Ted Kennedy’s challenge to him in the 1980 Democratic primaries, which in turn set him up for his spectacular defeat at the hands of Ronald Reagan.

One of the most perceptive pieces of journalism on the subject of Jimmy Carter was a 1979 essay by his former speechwriter Fallows called “The Passionless Presidency.” The title alone summons up an almost perfect image of the cool, detached Obama style, but the shocks of recognition keep piling up as you read on.

Carter, Fallows maintained, “is probably smarter, in the College Board sense, than any other President in this century.” Something similar could obviously be said for Obama. But smarts are not enough, either today or in the troubled 1970s. They led Carter and Company to place their faith in experts and expertise, and to try to solve problems as though they were a complicated math quiz, where “Once you had the right answer, they thought their work would be done.”

The job required much more than that, however. Carter could work out solutions on paper, Fallows acknowledged, but he failed “to project a vision larger than the problem he is tackling at the moment.” More bluntly: “Carter cannot explain what he is doing.” Narrative is always a problem for post-ideological Democrats, of course, but it has been a notable obstacle for Barack Obama, who (unlike Carter) is one of the great orators of our time and yet who is convinced, according to Jonathan Alter’s book "The Center Holds," that presidential oratory doesn’t really matter.

The final ironic lesson of the Carter presidency should be a cautionary tale for any centrist Democrat who dreams of striking a “grand bargain” with the right: No matter what conservative deeds Democrats undertake, as Rick Perlstein told me in conversation a few days ago, they will never win respect for it. It was Jimmy Carter, not the Republicans, who enacted the sweeping deregulation of transportation. It was Carter, not Reagan, who recommitted America to the Cold War and who slapped a grain embargo on the Soviet Union after that country invaded Afghanistan. (Reagan is the guy who lifted it.) And yet, in the mind of the public, Carter will stand forever as a symbol of liberalism’s fecklessness.

Barack Obama survived his re-election, but he is suffering a form of Jimmy Carter’s fate nevertheless. The ambiguous idealism of Carter’s first run for the presidency was precisely what set the table for his downfall later on. Being a “blank screen” or the personal object of the enthusiasm of millions—these may play well when a candidate is unknown, but they are postures impossible to maintain as president. In both cases, they led inevitably to disappointment and disillusionment.

The moral of this story is not directed at Democratic politicians; it is meant for us, the liberal rank and file. We still “yearn to believe,” as Perlstein says. There is something about the Carter / Obama personality that appeals to us in a deep, unspoken way, and that has led Democrats to fall for a whole string of passionless centrists: John Kerry, Al Gore, Michael Dukakis, Gary Hart and Bill Clinton. Each time, Democratic voters are enchanted by a kind of intellectual idealism that (we are told) is unmoored from ideology. We persuade ourselves that the answer to the savagery of the right—the way to trump the naked class aggression of the One Percent—is to say farewell to our own tradition and get past politics and ideology altogether. And so we focus on the person of the well-meaning, hyper-intelligent leader. We are so high-minded, we think. We are so scientific.

We are such losers.