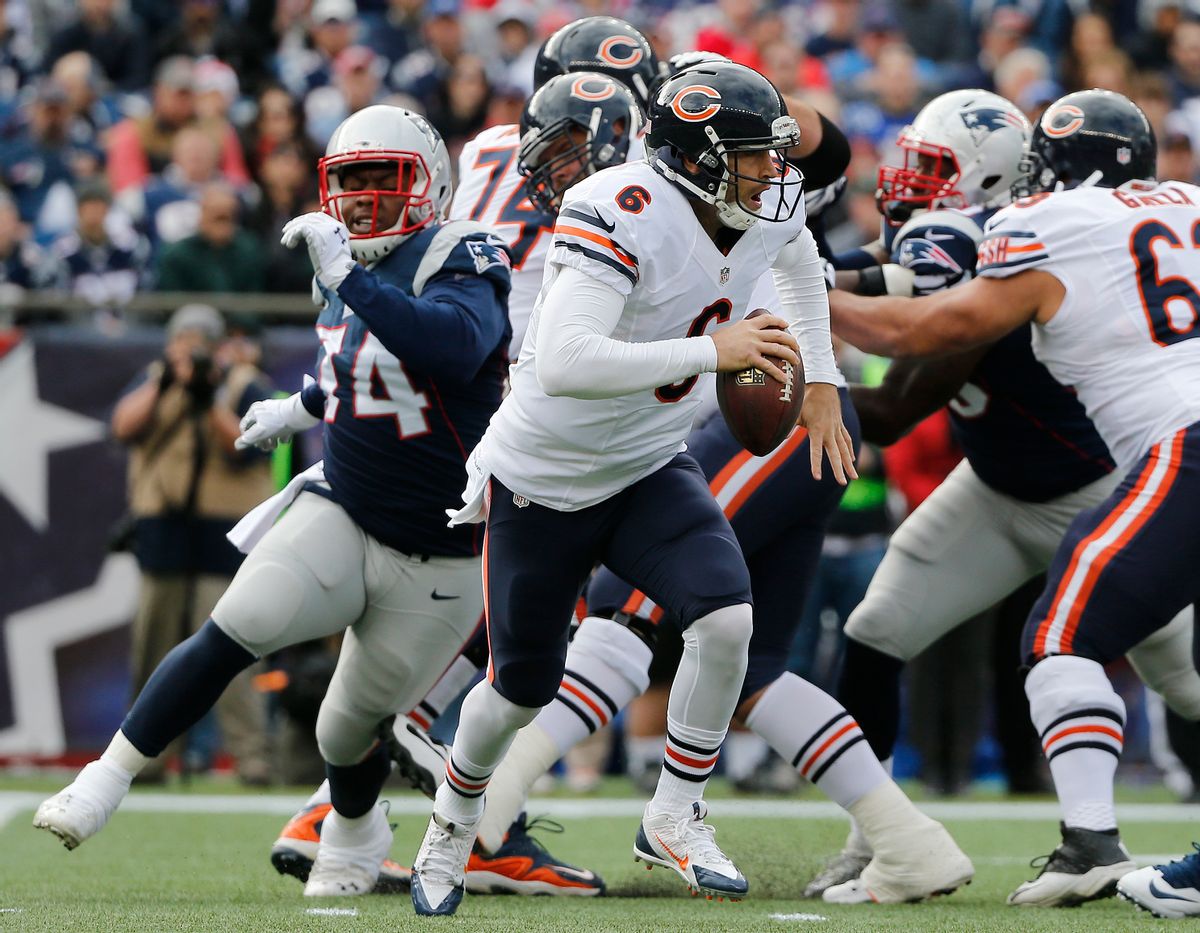 In one of the best performances of his brilliant career, the New England Patriots quarterback threw five touchdown passes and completed 30 of 35 passes. And four of the incompletions were drops.

The Patriots stayed on their roll with their fourth straight win Sunday, 51-23 over the sputtering Chicago Bears. So did Brady, who has thrown for 1,268 yards, 14 touchdowns and no interceptions in those games.

"I love coaching Tom. I've been fortunate to have him the whole career since he's been here," Patriots coach Bill Belichick said. "He does a great job of executing the team game plan."

He certainly did on Sunday with three touchdown passes to Rob Gronkowski and one each to Brandon LaFell and Tim Wright.

And he did it against a Bears team trying to rebound from a tumultuous week that began with a 27-14 home loss to the Miami Dolphins. Afterward, wide receiver Brandon Marshall was heard screaming in an emotional locker room. Coach Marc Trestman and quarterback Jay Cutler downplayed the postgame scene during the week.

Whatever happened, it didn't help the Bears play better.

After Sunday's defeat, Marshall told reporters waiting to enter the locker room, "put your ears closer to the door." But no outbursts were heard.

Brady was "meticulous," Trestman said and the Patriots "did everything on offense beautifully."

New England (6-2) scored on all five of its possessions in the first half — and one of Chicago's. The Bears (3-5) fell behind 45-7 early in the second half and lost for the fourth time in five games.

Brady passed for 354 yards with a completion percentage of 85.7, third best in his 227 games during the regular season and playoffs. His passer rating of 148.4 was his eighth highest in his 15-year career.

"There's a lot of (defensive) looks I've seen over the years," he said, "so it's hard to really surprise me with certain things."

Defensive end Rob Ninkovich scored with 55 seconds left in the first half on a 15-yard return of Cutler's fumble, the Patriots third touchdown in 57 seconds.

That stretch was "agonizing," said Cutler. "I think everyone's surprised. You don't expect to get out and beat like that."

Chicago was 3-1 on the road and had hope after last weekend's implosion. So imagine how the coming week will be after the blowout.

On their first five possessions, the Patriots scored on a 6-yard pass to Gronkowski, a 23-yard field goal by Stephen Gostkowski, and passes of 1 yard to Wright, 2 yards to Gronkowski and 9 yards to LaFell.

The defense got into the act when Darrelle Revis intercepted Cutler's desperation pass on the last play of the first half.

"We're a team on a mission," said Revis, looking ahead to next Sunday's home game against Peyton Manning and the Denver Broncos. "This is going to be two great teams going out there."

The Patriots started the second half with an 80-play drive capped by Brady's 46-yard touchdown pass to Gronkowski.

The tight end is "a big, physical guy," Bears linebacker Sean McClellin said. "He can run well. He had great hands. And when you put that with a quarterback like tom Brady, he's going to be tough to defend for anyone."

Gronkowski had nine catches for 146 yards before leaving midway through the third quarter with dehydration, and LaFell had 11 receptions for 124 yards.

The Patriots haven't lost since a 41-14 rout at Kansas City.

Cutler finished with 20 completions in 30 attempts for 227 yards, three touchdowns and one interception.

The rout was in sharp contrast to the Patriots previous game, a 27-25 win over the lowly New York Jets secured when Nick Folk's 58-yard field goal attempt was blocked on the last play on Oct. 16.

With extra time to prepare after that Thursday night win, the Patriots were ready. Their first two offensive plays were 19-yard gains on a pass to LaFell and a run by Jonas Gray.

The Bears punted on their first three series before Cutler's 25-yard touchdown pass to Matt Forte made it 17-7. Cutler also threw a 20-yarder to Martellus Bennett that cut the lead to 45-15 and a 10-yarder to Alshon Jeffery that made it 48-23.

NOTES: Forte rushed for 114 yards after entering the game as the NFL's fifth leading rusher. He began the day as the league's top pass catcher with 54 receptions and added six. .. Brady improved to 99-16 at home, including playoff games. His 87 regular-season wins at Foxborough in his first 100 starts are an NFL record. ... The Patriots won their 13th straight game against an NFC North opponent.