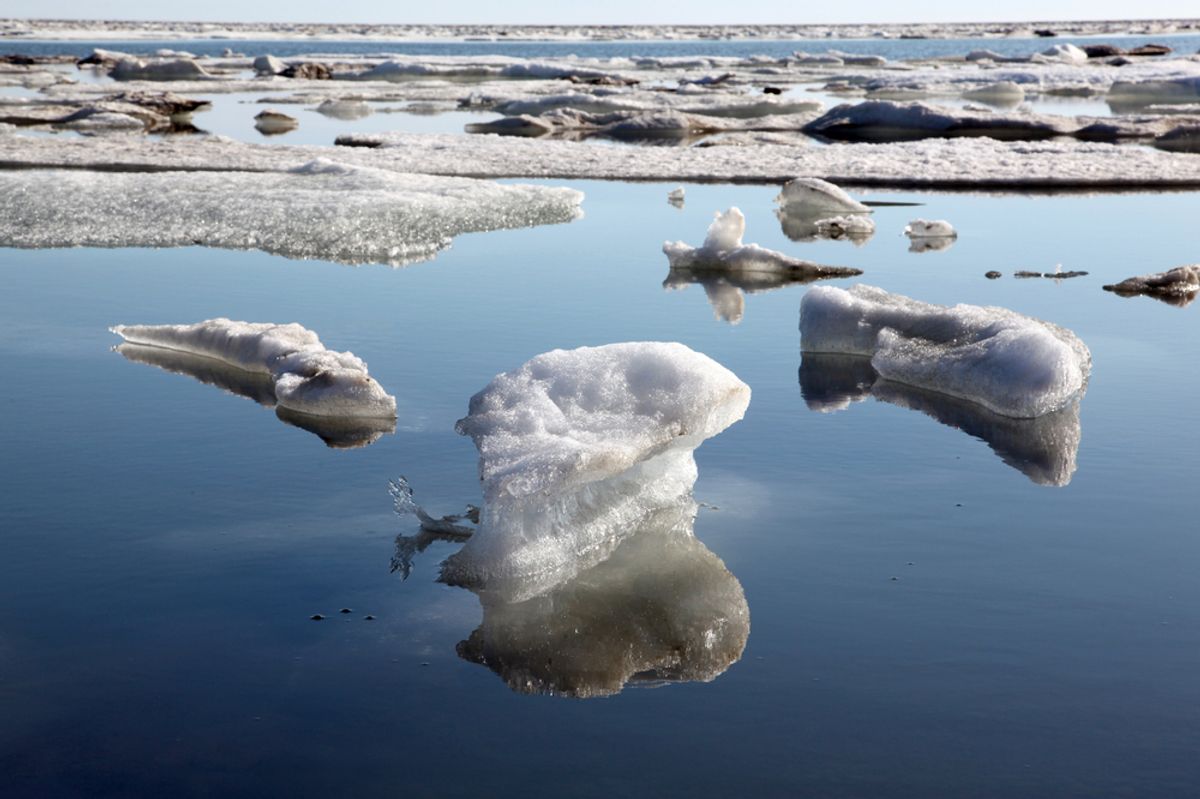 New research published in the journal Nature Geoscience indicates that the decline of Arctic sea ice could be linked with extreme weather in the Northern Hemisphere--specifically, that especially cold winters in Europe and Asia are twice as likely now.

Some may confuse the finding with the notorious polar vortex, where air from the Arctic sweeps down to North America, Europe and Asia, causing frigid winters. But recently, these especially cold winters have been happening way more frequently than projections indicate they should.

This study focused on the relationship between sea ice decline in the Barents and Kara Seas and these cold winters. Climate Central's Andrea Thompson explains:

To look for a link, Masato Mori, of the Atmosphere and Ocean Research Institute at the University of Tokyo, and his colleagues ran computer model simulations comparing what happens when ice is low in the Barents-Kara area and when it is high, using sea ice levels based on actual observations...

The model simulations suggest that the reduced sea ice leads to greater absorption of incoming solar heat by open ocean waters, which leads to pressure changes in the atmosphere. Specifically, it seems to intensify a feature called the Siberian High over Europe and Asia, and leads to more of what are called blocking patterns, where the atmosphere effectively gets stuck in a particular pattern for days or even weeks. In the case of the study, the feature leads to more breakouts of Arctic air over the combined Europe-Asia landmass.

One of the keys to the study’s success in seeing the pattern in the models was simply by virtue of doing a large number of model runs, effectively allowing the sea ice-fueled signal to emerge from the noise of natural variability, Mori told Climate Central.

In an email to Climate Central, Jennifer Francis, a researcher at Rutgers University who first introduced the idea of sea ice changes and extreme weather, said that the results held up. "This is a very solid paper that supports the mechanism identified in other recent papers linking sea-ice loss in the area of the Arctic Ocean north of Scandinavia to persistently cold winter conditions in central Asia."

Still, some are skeptical: how could global warming result in cooler temperatures?

"This counterintuitive effect of the global warming that led to the sea ice decline in the first place makes some people think that global warming has stopped. It has not," said Dr. Colin Summerhayes of the Scott Polar Research Institute in Cambridge, UK in an interview with The Guardian. "Although average surface warming has been slower since 2000, the Arctic has gone on warming rapidly throughout this time."