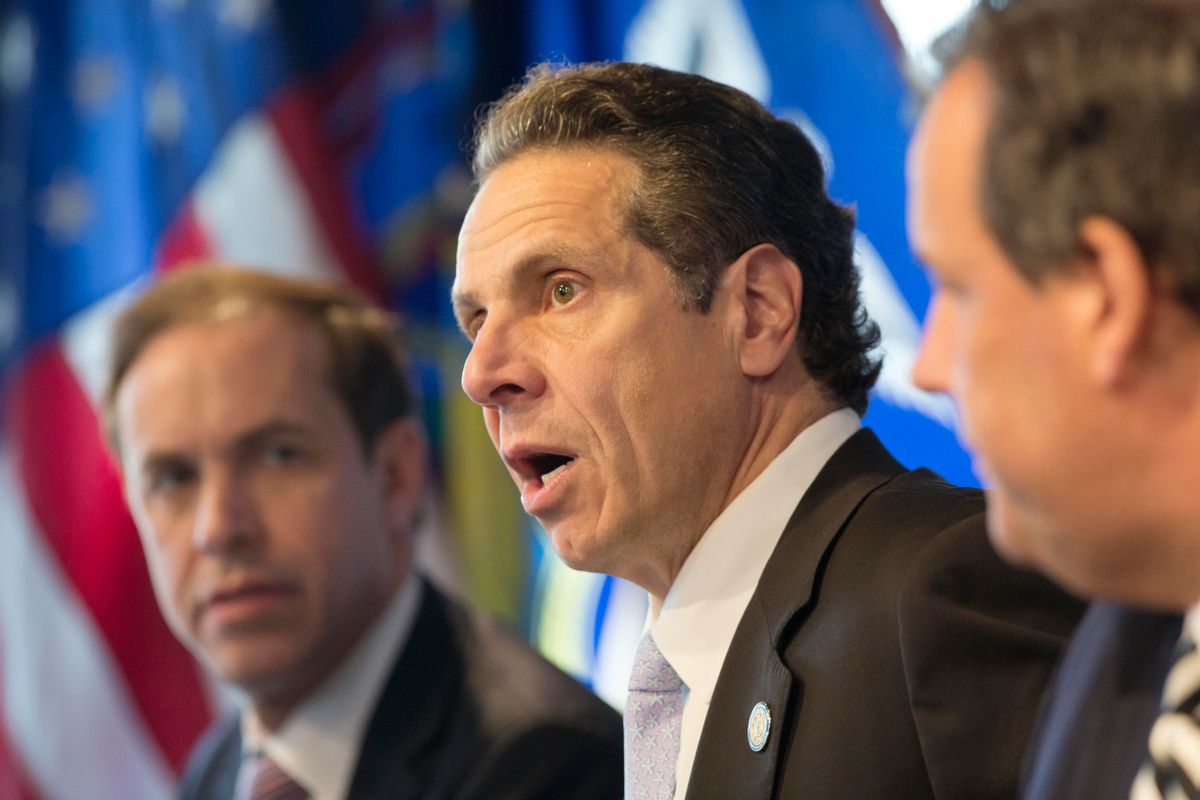 New York Governor Andrew Cuomo, center, speaks at a news conference, Friday, Oct. 24, 2014 in New York. At left is Dr. Howard Zucker, acting commissioner of the New York State Department of Health, and New Jersey Governor Chris Christie is at right. The governors announced a mandatory quarantine for people returning to the United States through airports in New York and New Jersey who are deemed "high risk." In the first application of the new set of standards, the states are quarantining a female healthcare worker returning from Africa who took care of Ebola patients. (AP Photo/Mark Lennihan) (AP)
--

Citing a "great sense of solidarity" with Ebola survivors and healthcare workers, a group of leading AIDS activists spoke out Monday afternoon against New York Gov. Andrew Cuomo's Ebola quarantine policy, calling it a "dangerous and explosive" overreaction that is spreading "dangerously incorrect information" about how Ebola is spread. It's a political reaction, they say, that will only contribute to "growing stigma and public panic" surrounding the outbreak.

"I'm a person living with HIV," said prominent AIDS activist Peter Staley, speaking in front of Bellevue Hospital in New York City. "And the sight I saw on Thursday night on television, with our mayor and our governor and our city health officials all standing together, calmly reassuring the public that they were in charge and doing the right things, that they cared about this, was something I couldn't dream of as a person with AIDS in New York in the 1980s."

All that changed less than 24 hours later, he continued, when Cuomo announced a mandatory, 21-day quarantine for health workers who had contact with Ebola patients in West Africa.

"We're so disappointed," said Jennifer Flynn, the executive director of VOCAL-NY, "because this is the opposite of what we've seen from Cuomo in his commitment to ends AIDs."

"We have not forgotten how HIV/AIDS was at first largely ignored when it appeared to affect only marginalized communities or the stigma generated once fear of the virus took hold in the larger populations," the speakers (all five of which are members of Cuomo's End of AIDS task force) wrote in a letter urging the governor to remove the mandatory quarantine. "We have watched with growing concern," the letter continued, "as Ebola virus disease was ignore far too long while confined to some of the poorest countries in the world, and how it has now led to hysteria here in the United States, based on only a very small number of cases." The letter was signed by more than 100 leading health professionals, including Partners in Health co-founder Paul Farmer, Chris Beyrer, the president of the International AIDS Society, and Joel Ernst, the lead doctor treating New York's Ebola patient.

The group emphasized that they support common-sense, scientifically grounded precautions for preventing the spread of Ebola in the U.S. Those include the designation of points of entry into the U.S. for travelers arriving from countries at the epicenter of the outbreak; the screening of such passengers; and the promotion of self-monitoring for people who may have been exposed to the disease, including reporting their temperature twice daily to the Department of Health.

But they stressed that there's a difference between monitoring -- even if that means dispatching health officials to check people's temperatures twice daily -- and quarantine. And their opposition stood even after Cuomo, following discussions that took place over the weekend, amended the policy to allow those under quarantine to remain home with their families, and to receive visitors. Regardless of where it's held, they said, a mandatory 21-day quarantine "goes against evidence-based, CDC-recommended public health practices grounded in science," and conveys misleading information about how Ebola is transmitted. "If people are asymptomatic," added Charles King, President and CEO of Housing Works, "there's no reason to deprive them of their liberty."

Alphonso David, Cuomo's deputy secretary for civil rights, responded that the policy would continue to be refined; but he also defended it, insisting that “the governor needs to make sure that we balance public safety and civil liberties."

The speakers also pointed out that despite the uproar surrounding health worker Craig Spencer -- who was out and about in New York City prior to being diagnosed with Ebola -- his case actually proved that the system works: Spencer presented at the hospital as soon as he detected a fever -- which is when it first becomes possible to transmit Ebola -- and no other New Yorkers have since contracted the disease. (The dramatic show of decontaminating the bowling alley and other places Spencer appeared shortly before receiving his diagnosis, they added, while meant to reassure the public, was a "huge overreaction" as well.) And the speakers expressed concerns that treating those entering the United States like criminals would not only allow more unreported cases of Ebola to potentially enter the U.S., it would also discourage volunteers from going to West Africa to help fight the epidemic at its core -- which is the only real way to end the outbreak.

Many of the comparisons drawn between the AIDS crisis and the Ebola outbreak were troublingly apt: King ventured that the children of healthcare workers being unnecessarily quarantined could themselves be barred from school, leading to another situation like that faced by Ryan White, the American teenager who was expelled from his middle after contracting HIV from a contaminated blood treatment. And citing New York's sizable population of West African immigrants, he recalled, as well, the way AIDS panic resulted in the stigmatization of the entire country of Haiti.

"The first sign of an epidemic is the spread of illness," said Kelsey Louie, CEO of the AIDS nonprofit GMHC. "And the second is the spread of hysteria." In political leaders and pundits calling for the physical isolation of Ebola patients, he warned, he saw history repeating itself.