Must viral videos be so bad? Admit it, "God Only Knows" is the worst

Celebrity viral videos explode online so quickly that we've forgotten this truth: Most of them are unbearably awful 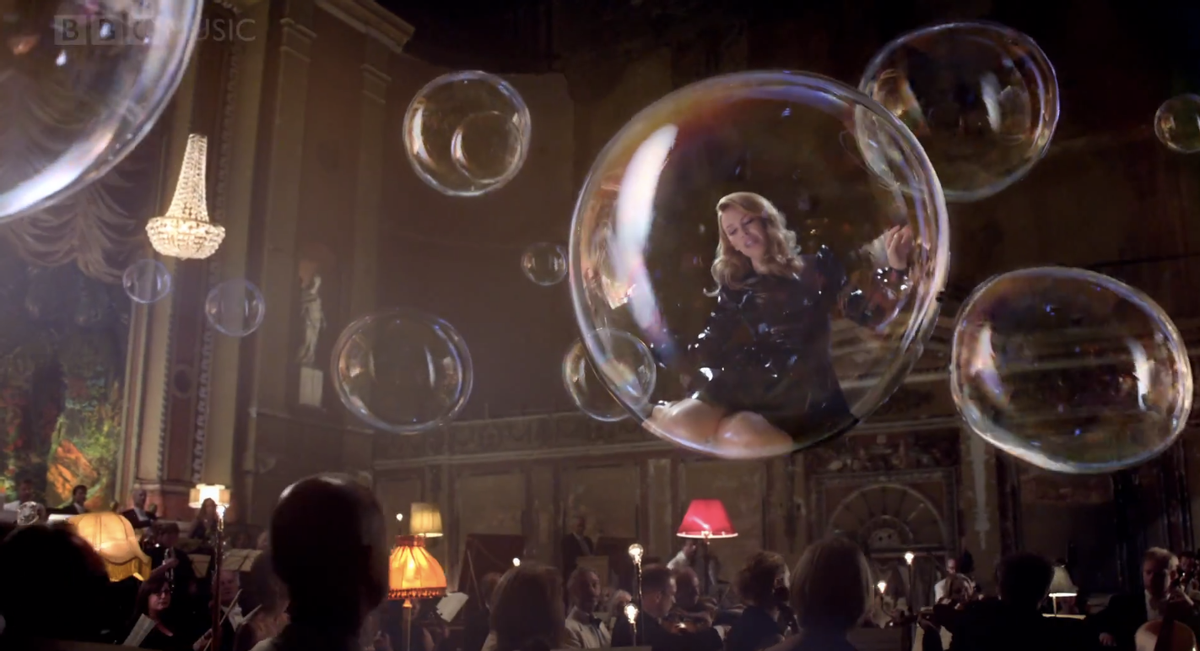 Andy Warhol once said, “In the future everyone will be world-famous for 15 minutes,” which wasn’t true.  Later, after declaring himself bored with his own cliché, he said, “In the future, 15 people will be famous.”  The crowded, ponderous downer that is BBC Music’s video for “God Only Knows” has disproved even that hopeful prophecy.

Through slow-motion camera tracking and shots held a little too long, we are led to believe that everybody in this thing is a star whether we recognize them or not.

I’m not anxious to contribute to the general trollery of modern discourse, but a line has been crossed, and the transgressors need to be reminded of a simple truth: Quantity is not quality.

Several stars, including David Bowie, Bono and Lou himself, all take turns singing one line of the song’s remake, making it more about who’s up next rather than whatever kind of emotional ambivalence is being communicated by the lyric.  (Wait.  Is this song about being strung out?  Oh look -- It’s Boyzone!)   At least in “Perfect Day,” the whole gang gets to sing another line or two as the song progresses, an error of restraint remedied by “God Only Knows.”

The roots of this “more is more” aesthetic can be traced back at least as far as ABC’s 1977 “The Beatles Forever” television special, which at one point had Tony Randall, Paul Williams and Anthony Newley singing bad barbershop on “When I’m Sixty-Four,” so you know it was a triumph.

The “God Only Knows” video takes place in a beautiful old performance hall, which transforms into a kind of Hallmark Cards acid trip.  Sunflowers sprout under fuzzy yellow sunlight.  People who don’t do drugs shouldn’t reference drugginess.  Remember the episode of "Dragnet" where that chick smoked pot and let her kid drown in the bathtub?  That didn’t work either.

In a way, “God Only Knows” has something for everybody.  It boasts the same frantic waste of resources as any Olympics opening ceremony.  Its self-described “Impossible Orchestra” features 32 stars past and present, as well as a few newcomers, so that viewers of all generations can spend a little time confused about who the hell they’re looking at.  The result is a bewildering, self-congratulatory mess of rococo overstatement.  Let me high-spot it for you:

0:45: Elton John, looking pained, covered in computer-generated blue butterflies, singing, “You’ll never need to doubt it.”  From the look of things, he should be singing, “Everything is satisfactual,” but no joy.

He’s followed by Lorde, so sibilant with her lazy S’s, sporting feathered wings.  See, 'cos she’s an angel.

0:57: An apparently terrified Brian Wilson.  A half-century ago, Brian wrote this gorgeous song.  Now, for some reason, there’s a tiger on top of his grand piano, which would scare anybody.  Also, he sounds like he has three voices, and one of them might very well be his own, from 1966.  This is weird and sad.

1:47: One Direction, who need to get themselves and their improbable hair off my lawn immediately.  “God only knows what I’d be without you,” they sing to the lighting director.

1:50 – 2:11: People on swings and in gondolas and rising high holding helium balloons, presumably borne aloft by the whimsy of it all.  Chrissie Hynde seated on a fake moon.  I love the Pretenders.

2:26: Here’s Dave Grohl, down-dressed in a jeans jacket, his fist clenched with emotion.  They must have cut away right before the ghost of Kurt Cobain appears and punches him on the arm.  Something is dying inside of me.

2:33: After Some Guy sings, an animated feather flies through a window, a clear but meaningless nod to the opening sequence of  “Forrest Gump.”  It lands on the broken (read: authentic) keys of Brian Wilson’s piano, as he sings the last line with his strange multi-voice with a pleading look.

As a palliative, I looked up the video for one of those all-star rock jams, similar to the ones that have become a requirement for every Rock and Roll Hall of Fame induction ceremony.  You know the type: A bunch of otherwise very talented people get up and play lots of rhythm guitar or furiously noodle over a pointless 12-bar blues.  The one I remembered was from “A Black and White Night,” a tribute to the great Roy Orbison from 1988.  True to this form, Roy sings a couple of lackluster verses for a song that has long since lost its teeth, then we are treated to a few tedious guitar solos by bona fide stars who still somehow want it too bad.   The real magic happens near the end of the song, when Tom Waits basically takes a shit on an electric piano.  He doesn’t play a solo so much as perform an autopsy on a sacred cow, at least for the four bars we’re allowed to hear before his track is muted.

The look Roy exchanges with one of the guitar players is priceless.  They look perplexed, and then smirk.  They must have understood on some level that Waits was only trying to wake them up.  It’s sad to watch a great song get turned into a pack mule for ego baggage.   It’s a drag to think of some BBC producer counting the number of lyrics to a Brian Wilson song he’s Googled just to get a head count for cameos.

Andy Warhol once made a film of himself eating a hamburger.  It was only one shot, and lasted over four minutes.  Just a short film of Andy, eating a Whopper.  It’s terrible and fantastic and ripe for parody, examples of which are all over YouTube.  I can think of a video response to “God Only Knows” that could be similarly done, only this time it would be of a chubby 18th century man, overly rouged and in a powdered wig, bending over an ornately carved desk and farting through his blue silk pantaloons, giggling like a schoolgirl.

Tom Maxwell is a writer and musician, currently flogging a new album ("Tom Maxwell & the Minor Drag") as well as a short memoir titled "Hell: My Life in the Squirrel Nut Zippers."