"NYC is unlike anywhere else in the world," Swift says. Oh really? Because we wouldn't know it from your new song 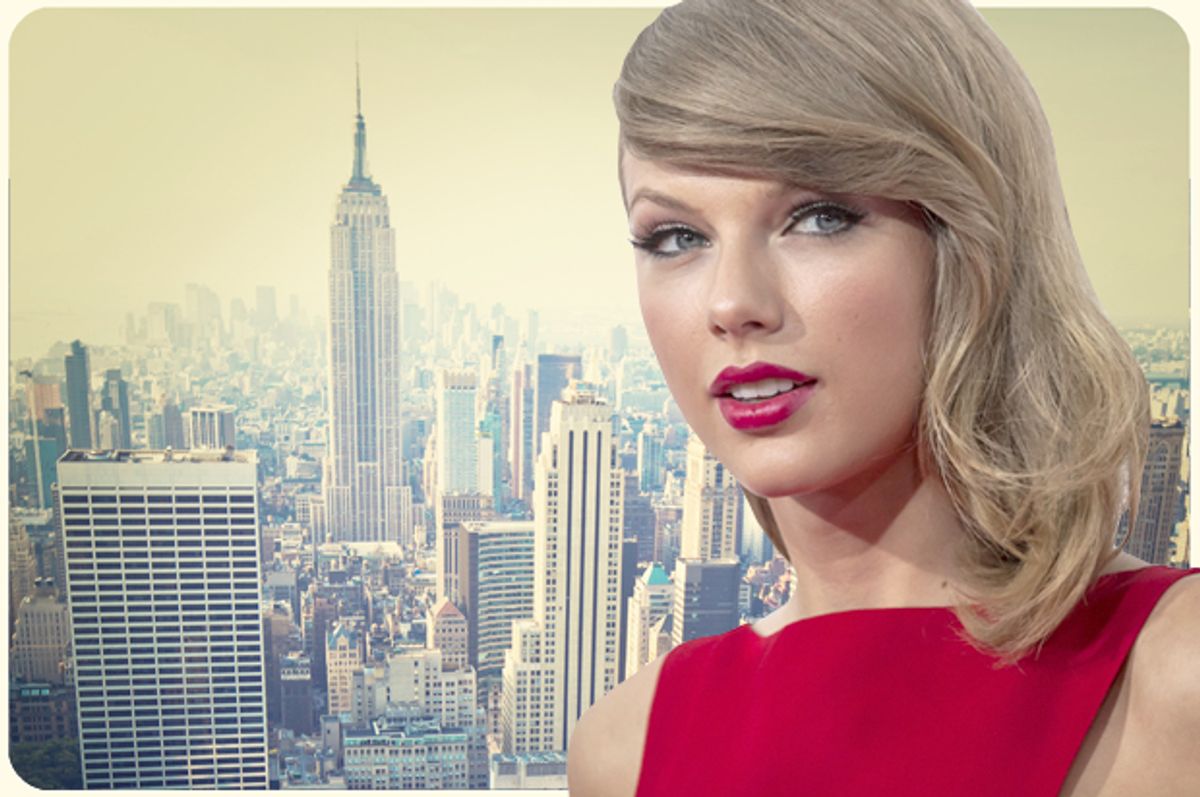 That’s freshly minted “Welcome Ambassador” for New York Taylor Swift in a promotional video on NYGo.com extolling the virtues of her adopted city. Swift moved into adjoining TriBeCa lofts previously owned by filmmaker Peter Jackson earlier this year and, as is the fate of all great Swiftian passions, proceeded to write about it on the opening track for her synthed-up new album, “1989.” Swift loves her new city, but you have to take her word for it. If you’re looking for actual evidence that New York City is still “unlike anywhere else in the world,” look elsewhere; this is surely the vaguest ode to New York ever created.

On the whole, “1989” is peppered with intriguing images: paper airplanes, wine stains, dead flowers, hospital stitches, vultures, foxes, Swift’s own signature red lips. But “Welcome to New York” is disappointingly free of arresting detail, full, instead, of vague clichés about bright lights and generic beats that Woody Allen already bested in the opening narration to “Manhattan” 10 years before Swift was even born.

Aside from a glancing reference to the Village in the first line, the only clue that Swift is actually singing about New York is the banal, ad-friendly chorus: “Welcome to New York. It’s been waiting for you.” Otherwise, the song might as well be welcoming listeners to Tokyo, or to Portland, or, for that matter, to any college town: “When we first dropped our bags on apartment floors / took our broken hearts, put them in a drawer / everyone here was someone else before / and you can want who you want.” And you don’t even have to buy Peter Jackson’s apartment to do so.

Who do you want to be in New York, Taylor Swift? That is the question the song doggedly refuses to answer. Instead, it invites us to consider the very act of moving to New York a genre switch underscored by the entire album — bye-bye, Nashville, and all traces of twang! — but even this slight act of reinvention is devoid of meaningful sentiment. “Like any true love, it drives you crazy,” Swift sings, and then refuses to elaborate.

Pop music history brims with songs about New York — its neighborhoods, its people, its singular beauty and its particular terrors. From Run DMC to Steve Earle, musicians have been praising and eulogizing the city since the Tin Pan Alley days. In her mix tape-to-order essay “Thanks for the Memorex,” Sarah Vowell chastises a male friend for requesting a love song that’s “not sentimental.” She writes, “If Dave was calling his romance ‘not sentimental,’ then he was not having a romance.” For Swift’s romance with New York to be remotely believable, let alone inspirational, she could try allowing some true sentiment to creep in. Or at least some identifying details.

It’s a shame none of the art, fashion or even humanity that allegedly inspires Swift made it into this song in any concrete way. There’s no shortage of material in the five boroughs, but she might have to reveal that she’s left her multimillion-dollar compound to find it. Wouldn’t Swift fans love to know what’s catching her eye? For an artist even poptimist extraordinaire Rob Sheffield cites with “oversharing” in his four-star review, it’s weirdly cagey.

Comparing Taylor Swift to Lou Reed is a ridiculous comparison, but it’s hard not to think of his groundbreaking record “New York,” released in, yes, 1989. In a previously unpublished Q&A with Reed just released by Rolling Stone, “Lou Reed: A New York State of Mind,” Reed details his touchstones for the conceptual album, including homeless Vietnam veterans, urban decay, the “Statue of Bigotry.” Nobody’s asking Swift to conjure up a New York that’s changed so much over the course of her young life, but it’s not too much to ask for some evidence that she’s actually living in the city for which she cheers.