The Indiegogo-funded flick is a landmark depiction of race in America, a "Do the Right Thing" for Gen Y 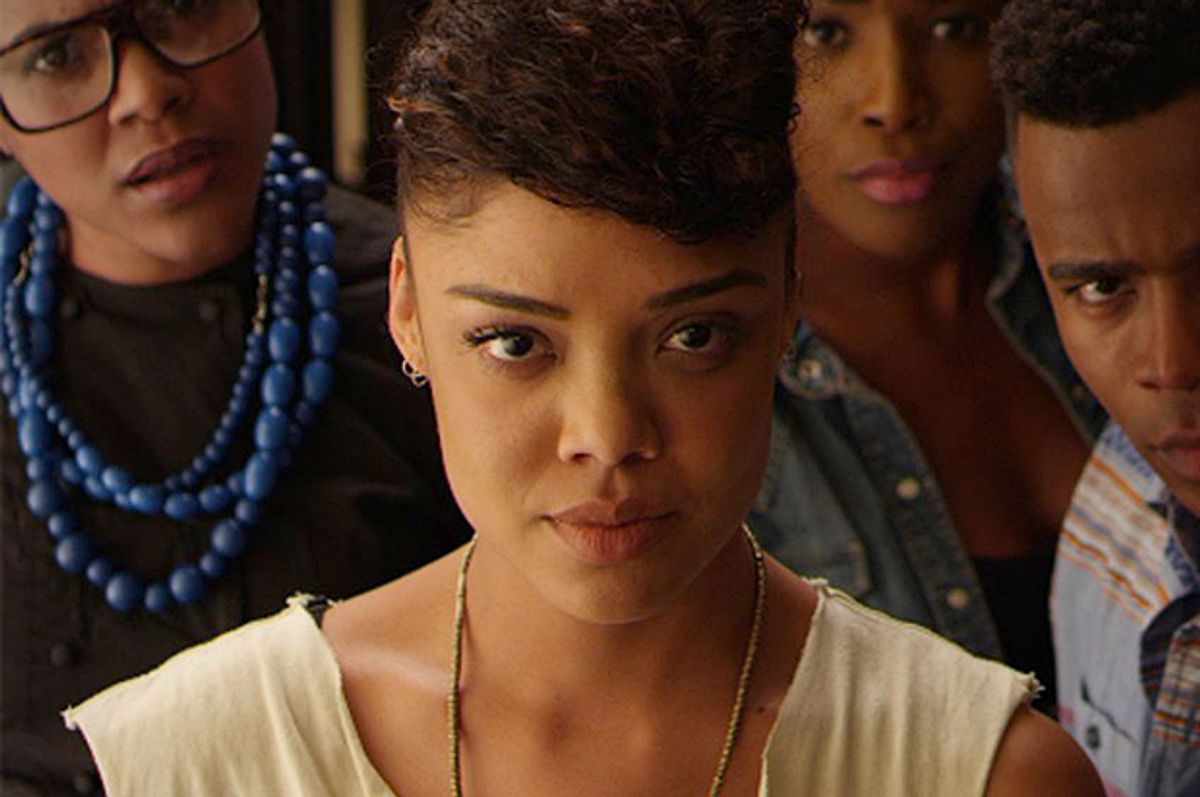 Sundance Film Festival breakout Dear White People is making waves in more ways than one. The feature-length debut of director Justin Simien bowed with a strong opening in limited release last week and hopes to pick up steam as it begins its rollout in wider release this weekend, boosted by a strong, eye-catching social media campaign that hopes to raise awareness about the film and get people talking about the issues it addresses. One Funny or Die-esque clip to promote the movie posits “racism insurance” for white people after a seemingly pleasant conversation about Game of Thrones goes very wrong.

In the wake of Ferguson and Trayvon Martin, the Indiegogo-funded movie is an incredibly important cinematic moment for Americans, a college-set Do the Right Thing for the social media era. Whereas Spike Lee’s tour de force helped generate a dialogue about race at a time when police violence was becoming the norm, Simien’s film recognizes that we’re still dealing with the same cultural baggage over two decades later. It’s a movie that everyone should not only see, but encourage everyone else to see. Here’s some good reasons why.

Dear White People debuts at a time when black artists and voices arewoefully underrepresented in Hollywood. Until Ang Lee won an Oscarfor Life of Pi, a non-white filmmaker had never taken home the Best Director trophy in the entire history of the Academy, and a black woman has never even been nominated (which Ava DuVernay’s forthcoming Selma hopes to change). While Alfonso Cuaron took home top honors last year, the loss for 12 Years a Slave further cemented the fact that when it comes to supporting black artists, we have a long way to go.

Of course, it’s not just an Academy problem. Hollywood’s whiteoutcontinues across the board. In an essay for the Daily Dot earlier this year, I discussed the struggles black artists face for representation in the Hollywood system; this is a burden that’s overwhelmingly placed on women of color, as black women find themselves playing slaves, doctors, nurses, and “the help” over and over again. Around the same time, Take Part’s Nicole Pasulka also crunched the numbers:  “Of the more than 600 major Hollywood films released since 2007, less than 7 percent had black directors. Around 10 percent of speaking roles went to non-white actors, but for films with a black director, 40 percent of characters with speaking roles were minorities.”

Pasulka’s findings speak to an important solution: In order to create change, we need to not just fund movies with black people in them, but films made by black artists who have an investment in working to diversify a broken system. Helmed by a black director who is proving to be an important voice in a new generation of cinema, Dear White People is a great place to start.

2) But it’s not just for black people.

Movies that feature predominantly black casts generally attract black audiences, from Tyler Perry movies to the recent Jackie Robinson biopic, 42, and the successes of films like The Best Man Holiday tend to be ignored. Why? Because white people aren’t paying attention to them. On this demographic divide, Andre Seewood of Indiewire argued that it’s a problem of the Racial Empathy Gap. Seewood wrote, “A vast majority of white people don’t like black movies because they lack the empathy necessary to identify with black characters which in turn affects their ability to ‘suspend disbelief’ and surrender to the narrative of a black film. “

On the Racial Empathy Gap, Seewood cited a study from researchers at University of Milano-Bicocca and the University of Toronto at Scarborough arguing that “The human brain fires differently when dealing with people outside of one’s own race.” Seewood continued, “This study found that the degree of mental activity when White participants watched non-White men performing a task was significantly lower than when they watched people of their own race performing the same task.”

What’s heartening, though, about the early success of Dear White People is that the film’s social media engagement seems to have addressed the kinds of people who might otherwise not empathize with black narratives. As crucially important as it is for black people to see their own lives and struggles represented onscreen (which the film directly discusses), it’s just as important for others to be confronted with difference. For black folks, issues of race might be preaching to the choir, but the audience I saw Dear White People with was largely Caucasian (although surprisingly diverse all around).

In order to push for more black stories to be told, we need to keep showing that they are just as universal and important as white ones. Let’s just hope my audience was paying attention.

One of the most hot-button debates in recent years about the Hollywood system is the ways in which mainstream cinema penalizes female pleasure. If a man gets a blowjob onscreen (see: American Pie,Scary Movie), the film can usually slide by with an R, surely prohibitive to profitability but by no means a kiss of death; the R-rated Gone Girl is causing quite the box-office stir. But films have been given the NC-17 guillotine for showing analogous oral sexin which that the person on the receiving end happens to be a woman. A memorable segment in Kirby Dick’s This Film Is Not Yet Ratedstirringly illustrated the MPAA’s long bias against films that feature female orgasm.

Dear White People’s commitment to her pleasure, too, is so brief you might miss it, but it’s nonetheless revolutionary. In the film, Veronica Mars’ Tessa Thompson plays Samantha, a would-be campus revolutionary with an incendiary radio show (called, yup, Dear White People). Although she’s dating the most eligible black man on campus, Samantha happens to be having an affair with one of her white classmates, a TA in her film studies class. In one scene together, he goes down on her matter-of-factly, as if it’s all just business as usual.

In addition to the cunnilingus aspect, what’s refreshing about the way in which the scene is presented that it’s done so without the faintest hint of slut-shaming. As a campus comedy, Simien’s script is smart enough to recognize that his students are in a crucial point of transformation, one in which their sex lives are bound to be as confusing as the rest of their lives. Thus, Sam’s choice to stray from her relationship is portrayed with empathy and frankness; sure, she might face some repercussions for cheating, but those won’t come from the filmmaker’s moral leanings or a desire to punish young women for being sexual. It’s all just a part of growing up and figuring yourself out. Isn’t that what college is for?

The film’s penchant for complicating narratives extends outside of the bedroom. Dear White People’s early scenes get a provocational power from Samantha’s radio addresses. As the host of the Dear White People program, Samantha offers edicts to her Caucasian classmates about race: “Dear white people, the number of black friends required to not seem racist has officially been raised to two.” Samantha’s goal is to rile up her listeners, but also make them think critically about issues of privilege and inequality, but Dear White People is smart enough to recognize that neither Sam nor the movie has all the answers. The reality is too complex for that, one difficult for any of us to navigate.

To wit, Samantha’s biggest narrative rival is Troy Fairbanks, a campus legacy who faces pressure from his father (who happens to be the Dean of Students) to succeed. For his father, that means blending in and setting a good example, whether that means running for president of his house or behaving in a way that looks presentable to alumni donors. Coco, another student on campus, just wants to be famous, and at the beginning of the film, that means playing down her Chicago roots. Coco insists, “There’s nothing Southside about me.” But when a reality TV producer is scouting talent on campus, he wants something that will be attractive to their audience. Thus, Coco begins to “black it up,” playing the sassy stereotypes expected out of black women in the media. (Not that there’s anything wrong with being sassy.)

The film’s commitment to nuance, though, is best indicated through Lionel, a shy, gay student who insists that he doesn’t identify as anything and has a difficult time finding his place on campus. He’sDear White People’s equivalent to Do the Right Thing’s Mookie, a character that’s both a surrogate for the audience (as lost as we are) and its eventual moral voice. When a blackface party on campus forces Lionel to come out of his shell and take a stand, it’s a reminder that racism isn’t just perpetrated by the KKK or pre-war slave owners. We all have a part in a system of inequality, and eventually, each one of us will be forced to pick a side. Which are you on?

5) Dear White People reminds us how important education is.

As a filmmaker, Justin Simien’s top priority is to illustrate the conflicts and complications of his web of characters, but there’s an important educational imperative to Dear White People. It’s rare that a movie with a commitment to diverse casting is made outside of aShonda Rhimes show, and even rarer still that such a movie would so overtly address issues of race, even in the title. That may be an immediate turn-off for the kinds of people who believe we live in a post-racial America, but Dear White People is an important reminder that we don’t.

From the film’s discussion of the perils of black tipping (one of its most quietly powerful scenes) to its reminder that white people a) don’t own black people’s bodies so b) they should never touch a black person’s hair without permission, it asks all of us to check our behavior and our privilege. Not only it is important to clear the air for those who might have been dealing with these issues their entire lives, but it’s also crucial for those who might not have realized they were issues at all.

When I got to the theatre, I sat next to an old Jewish woman, hunched over her popcorn bucket as she paid rapt attention to the screen. I hope she tells her friends. I hope she tells her grandsons about it. Because in real life, there is no racism insurance, so it’s everyone’s job to help get it right.