Battle of the scandal-plagued GOP titans: Behind the Walker-Christie feud

The Wisconsin governor is miffed he’s not getting more cash from the group Christie heads. But who’s sliming who? 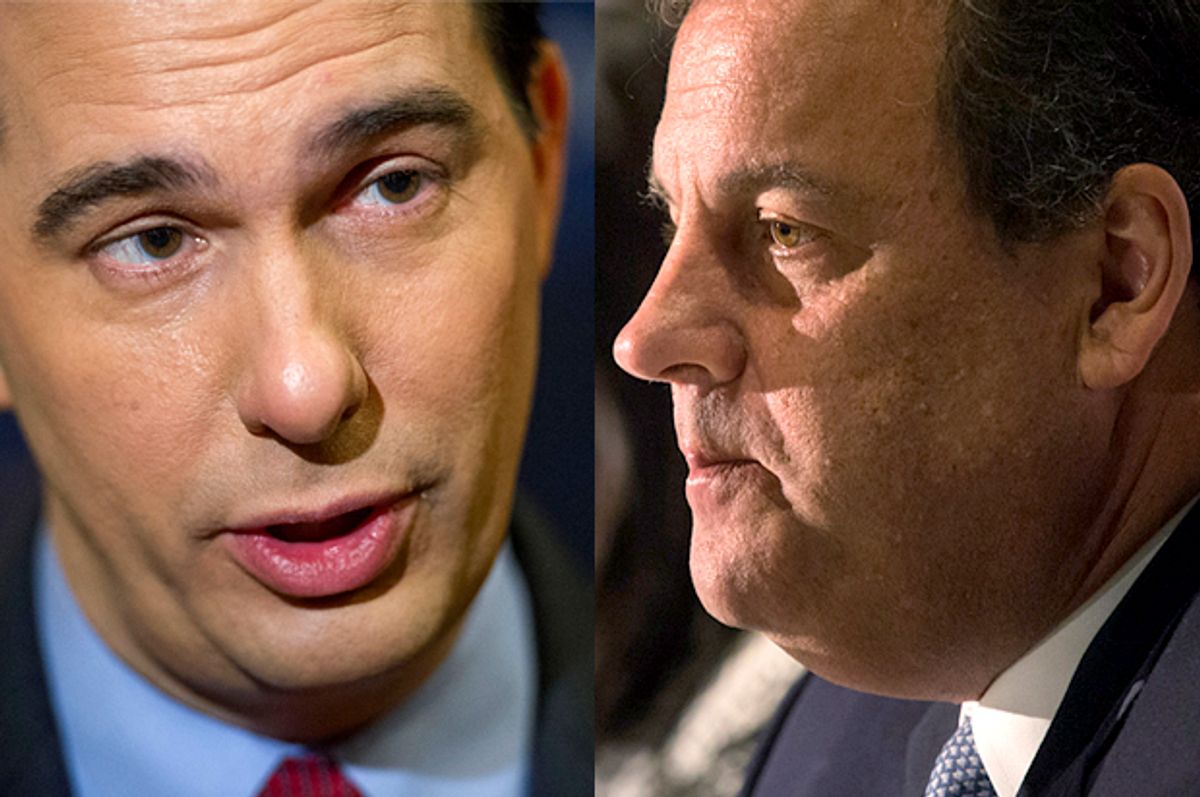 As chairman of the Republican Governors Association, is Chris Christie deliberately sabotaging Scott Walker’s reelection bid, in order to scotch the presidential hopes of a potential rival? Or is Walker trying to use the taint of Christie’s ethics troubles in New Jersey, where he’s under investigation for several allegations that he used public resources to reward friends and punish rivals, to diminish Christie as well as guilt-trip some more RGA support, a week before the election?

No one knows for sure, but the Walker-Christie feud is one of the most entertaining political subplots of the midterms.

One thing is clear: Walker is worried about his race, and for good reason. As I noted last week, the embattled governor sounded desperate and a little peeved in an interview with the Washington Post’s Robert Costa, last week, claiming money woes and saying his campaign needed more help from the RGA. “Hopefully that comes through,” Walker said. “We are always looking for more help. Our main help has to be the RGA.”

Two days later, the Weekly Standard reported that “a number of top Wisconsin Republicans” had expressed concerns “that RGA chairman Chris Christie might be tanking Walker, a potential rival for the 2016 Republican presidential nomination.” They claimed Walker had received far less RGA money than Michigan Gov. Rick Snyder next door, a less close race, albeit in a larger state.

Walker himself didn’t do much to scotch the rumors of discord between the two men, telling Politico he hoped he’d get help from “at least some of the national governors associations” while complaining his outside support has “paled in comparison” with what liberal groups have spent advancing Burke (though the Washington Post’s calculations dispute that Walker is being outspent.)

Even worse, asked about Christie’s impending visit, Walker wasn’t playing the gracious host. The sulky governor told reporters that “[Christie] is coming because he asked if he could come and we weren’t going to say no,” Walker said. “But we’re not looking for surrogates. The people that have been campaigning with me are by and large from Wisconsin.” Walker might say that because Christie's last visit didn't seem to help him much. The two scandal-dogged governors -- Walker has faced two John Doe probes into campaign ethics, and top aides have been convicted -- looked like they were trading legal tips while touring a Wisconsin factory last month.

Whatever their merits, Walker’s claims about Christie are finding a ready audience on the far right, which already hates Christie for not being conservative enough. Many believe he sabotaged Mitt Romney in 2012 by embracing Obama during Hurricane Sandy, in order to further his 2016 ambitions. It’s easy for them to believe he’d do the same to Walker.

Radio host Mark Levin has taken up Walker’s cause, insisting “Christie wants Walker taken down,” and accusing Christie of “sabotaging” his rival from Wisconsin. The folks at Breitbart worry that the New Jersey governor has it in for Walker because “Walker is probably more significant to the Republican Party, both as a symbol of resistance to Democrat corruption in Wisconsin … and as a possible presidential contender.” The wailing on the right may have helped grease a $650,000 donation by Sheldon Adelson to the Wisconsin Republican Party announced yesterday.

Late Monday Walker tried to walk back his nasty remarks about Christie’s visit and welcome his “good friend” to Wisconsin. Democrats in Wisconsin are enjoying the scene. The same day as Christie’s visit, President Obama is campaigning for Mary Burke. Obama was supposed to be the more controversial campaign surrogate, but now all eyes are on Christie and Walker, and Mary Burke just smiles.