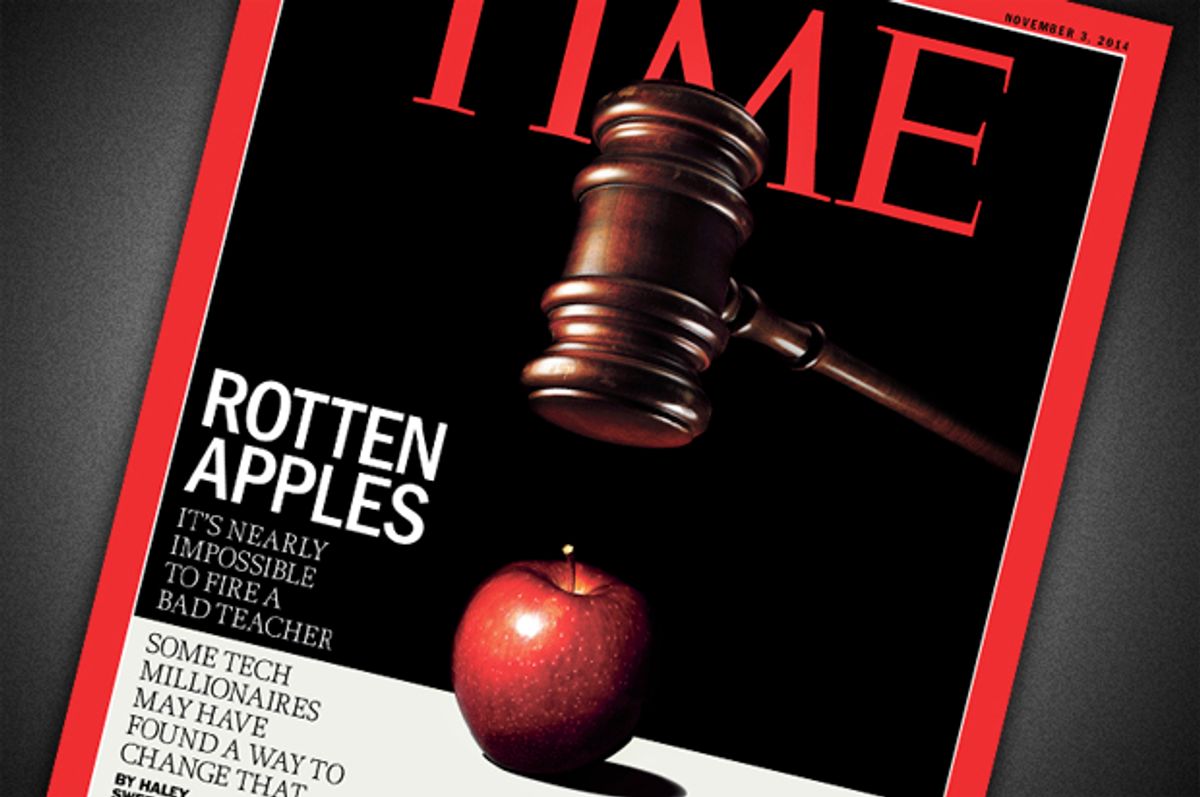 Back in the day, Time was considered a prestigious publication that could elevate people and stories into historical importance.

Now, Time is best known as the figurehead at the sinking prow of the Titanic newsmagazine industry.

As industry analysts noticed last year, Time's 2012 performance was one of the worst in the rapidly collapsing newsmagazine business. In 2013, newsmagazines had another down year according to the same analysts. And in the first half of 2014, the consumer magazine market as a whole experienced even more decline, as the Wall Street Journal recently reported.

As evidence of Time's lack of with-it-ness, the website's list of most frequently read articles by Time.com readers includes "best times to buy clothing," an announcement from Google, and a slew of articles about Hurricane Sandy.

Last year, the magazine's editors grappled with the weighty decision of whether to award its still coveted "Person of the Year" award to Pope Francis, the reigning leader of a religion practiced by more than 1.1 billion people, or Miley Cyrus, someone who makes a living by sticking her tongue out.

To slow its steady slide toward the gaping maw of corporate restructuring, Time continues to grasp for handholds of relevancy using the least imaginative means its editors can think of: hawking provocative covers in the aisles of low-budget grocery stores.

Which makes Time an apt landing spot for what has become one of the most boorish news items of all: education "reform."

Time's latest sideshow stunt came in the form of a cover featuring the title “Rotten Apples,” with the image of a gavel bearing down on what appears to be a pretty fresh-looking Stayman, and the subhead, “It is nearly impossible to fire a bad teacher.”

The reference, of course, is to the due process – often called "tenure" – teachers receive when they are threatened with being fired.

Classroom teachers were none too pleased with having their job security threatened, and the American Federation of Teachers quickly ramped up a petition demanding an apology.

At last count, the petition had generated more than 50,000 signatures, according to Valerie Strauss at the Washington Post, about where Time's average single copy circulation may be a year from now.

National Education Association president Lily Eskelsen García shot back in a post carried by Time on its website: "Due process policies like tenure exist in almost every state. Although timelines and appeal processes differ, the concept is the same: After passing a probationary period and satisfying performance expectations, teachers get two basic things before they can be fired: (1) The teacher gets to know why. (2) If she feels she is a good teacher being fired for a bad reason, she gets to defend herself and tell her side of the story. That’s it."

AFT president Randi Weingarten asked: "Research shows that our most at-risk kids need more-experienced teachers. But why would these teachers stay at schools with few tools, little support, and no ability to voice their concerns?"

As Strauss noted in her commentary, Time has addressed the issues of "bad teachers" and "education reform" before. In 2008, an issue of the magazine featured a cover showing Michelle Rhee, head of Washington, D.C., public schools at the time, standing in a classroom holding a broom, with the headline, "How to Fix America’s Schools" and a blurb that said, "Michelle Rhee is the head of Washington, D.C., schools. Her battle against bad teachers has earned her admirers and enemies – and could transform public education."

Strauss reminded us what Rhee ultimately "transformed" in the D.C. public schools. Rhee, in fact, had no trouble firing teachers at all, letting go hundreds of them during her chancellorship, from 2007 to 2010. She also accomplished nothing with this. "The achievement gap, which she said she wanted to close, didn’t budge (and remains wide)," Strauss noted.

D.C.-based education blogger G.F. Brandburg has scrupulously analyzed what Rhee and her successor Kaya Henderson accomplished in their tenures since 2008 and found a decidedly empty harvest. "I’ve been examining the promised, miraculous gains," he wrote, "that were promised in the troubled Washington, D.C., public school system to see whether any of those 78 promised goals were reached. Rhee and Henderson actually accomplished one and a half out of that 78 goals."

So much for "transforming public education."

Nothing New From Time

Astonishingly, since 2008, Time has learned nothing about the problems besieging teachers and their schools and the much-ballyhooed promises of "education reform."

The article (behind a pay wall) is written by a journalist who seems brand-new to the scene, reporting about a Silicon Valley tech tycoon, David Welch, who is behind a lawsuit, Vergara v. California, that seeks to rewrite teachers' job protections. Nothing new here.

The article quotes all the usual suspects: Beltway operatives from right-wing think tanks – Michael Petrilli of the Thomas B. Fordham Institute and Michael McShane at the American Enterprise Institute. Why no teachers?

Further, as Peter Hart at Fairness and Accuracy in Reporting noted, "the biggest" problem of the story: "It buries the lead," waiting "until the very end to tell readers that the teacher evaluation scheme … is highly dubious."

The evaluation method Hart referred to is the current fad among education reform mavens to insist on evaluating teachers based on student test scores.

Education technology whiz Scott McLeod corralled the pertinent research regarding this topic on his blog some time ago. He concluded, "While it seems to make intuitive sense to evaluate teachers based on students’ standardized test scores (aka using ‘value-added measures,’ or VAM), in practice it doesn’t seem to work very well. At this time, researchers do not support the incorporation of student test scores into teacher evaluations except in carefully-designed, low-stakes pilot experiments."

For the Time article to breezily mention this at its conclusion is to leave us with nothing new at all. And the reporter's observation that those who are intent on "reforming" the system couldn't care less about the facts and remain "undeterred" is nothing new either.

Far better would it have been for the story to start with that conundrum and attempt to find a constructive way out of it.

No Good Reason to End Tenure

Much like Time editors cling to a fading model of journalism, their reporting enforces a story line about "education reform" that has been completely discredited.

As a recent commentary by law school professor Erwin Chemerinsky in the New York Daily News explained, "A study published in the Harvard Educational Review found a significant positive relationship between rates of unionization (and accompanying job security) and student scores on the SAT and ACT. Every year, the states with the highest student performance are those with robust protections for teachers – places like Maryland and Massachusetts."

Matt Di Carlo of the Albert Shanker Institute has meticulously studied the relationship of student and school performance to the strength of teachers' unions that argue for tenure protections in their contracts. He wrote, "Binding contracts are not associated with lower [National Assessment of Education Progress] scores, at least at the state-level. Charter schools, which are largely free of both unions and their contracts, overwhelmingly perform no better than regular public schools (see also here and here). And the undisputed highest-performing nation in the world, Finland, is wall-to-wall union, with contracts, tenure, and all the fixings."

Of course there are anecdotes of bad teachers doing awful things to school children and getting away with it. This is nothing new, and it must be addressed. But blanket accusations and calls to sweep away legitimate teacher job provisions are not the answer.

As Di Carlo in the above cited post concluded, "Look – teacher contracts are not perfect, because the teachers and administrators who bargain them are not perfect. There are many common provisions that can and should be improved. But placing primary blame for poor student performance on union contracts is both untrue and extremely counterproductive. If we all stop pointing fingers, perhaps we can have a more comprehensive, realistic, and constructive conversation about why some U.S. schools are failing, and what can be done to fix them."

That better "conversation" should include, for instance, the really huge problem many schools have with teacher retention. As Chemerinsky noted in his Op-Ed cited above, "In the District of Columbia, 80 percent of teachers leave within five years. Getting rid of tenure and due process will not encourage more teachers to stay in the profession. It will drive them out and discourage other qualified people from entering the profession in the first place."

American teachers, in fact, already have one of the more challenging work environments compared to other teachers in the world. As New York Times columnist Nicholas Kristof recently pointed out, the most recent report from the OECD, an agency tracking data from developed nations, "indicates that American teachers work far longer hours than their counterparts abroad. Yet American teachers earn 68 percent as much as the average American college-educated worker, while the O.E.C.D. average is 88 percent."

"Everything – everything – tells us that if our goal really is to put a great teacher in every classroom," he concluded, "attacks on tenure are literally the exact opposite of what is needed."

Tired of This Kind of Journalism

So to talk about ending tenure is hardly the conversation starter we need. So why is Time doing it?

In answer to that question, Integrity in Education, an advocacy group for public schools, contended, "Education doesn’t get nearly the media attention it truly deserves, but when it is covered, it’s often the people with the least knowledge and experience about public schools, and those who are least representative of the groups most affected by education policy, who are doing most of the talking.

"As we just saw with TIME magazine, many mass media outlets turn to wealthy people who don’t attend, work in, or send their children to public schools to shape the discussion about public education issues.

"And while the teaching profession is nearly 80 percent women, media outlets frequently give men from totally unrelated, majority-male domains like the tech and finance industries space to advance their ideas on education policy, no matter how misinformed or even dangerous their ideas are.

"So while the same few people on both 'sides' of the education debate go back and forth on the same tired issues, much bigger educational questions are going completely unasked, let alone answered."

A fitting description of the Time "Rotten Apples" cover story, for sure: a tired topic from a tired source.

I think we're all tired of that kind of journalism.