The woman in the video is white. Her harassers are not. Mining the subtexts of the week's most talked-about video 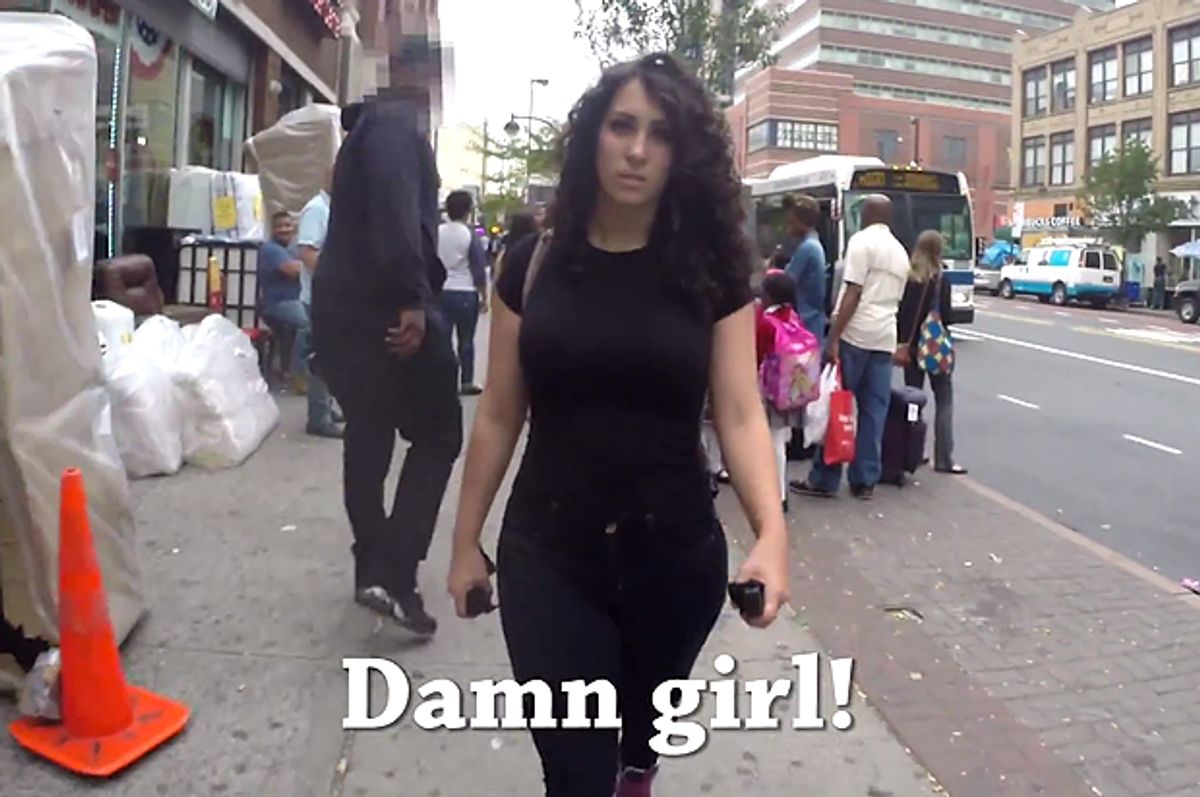 A video documenting more than 100 instances of street harassment, a PSA produced in partnership with the nonprofit group Hollaback,  has “gone viral.”  I know this because people in my Facebook feed are just now discovering it and will be for the next week or so. Mostly, they are talking about how awesome it is and how they’ve had similar experiences. Meanwhile, people in my Twitter feed are dismissing it as problematic and racist.

Those more nuanced Twitter reactions are interesting, and valid: Because the woman who volunteered to be filmed is white and a lot of her harrassers are not, an uncomfortable and likely unintended subtext crept into the video. While Hollaback’s blog post about the video makes sure to point out that “street harassment disproportionately impacts women, people of color, LGBTQ individuals, and young people,” that wasn’t the dynamic that the video represented.

Part of being honest about street harassment and creating awareness of it has to be an honest assessment of the ways this kind of harassment can be a way marginalized groups talk back to the white gentrifiers taking over their neighborhoods. I liked Roxane Gay’s tweet about the video, where she admitted that what made it so hard for people to figure out how to respond appropriately to it was that: “It's difficult and uncomfortable to admit that we have to talk about race/class/gender/sexuality/ability/etc, all at once.”

But there was yet another genre of reaction that I found fascinating: men’s reactions. Most of the initial reaction to the video came from men; in fact, I first heard about it from men. They posted it on social media with expressions of incredulity and shame. A lot of them said things like “I had no idea.”

A standard meme or trope that’s emerged recently is the phenomenon where a woman will comment on something negative that men have done, and a chorus of male voices will respond to her immediately with assurances that they, personally, would never do such a thing.  “Not all men!”  or even #notallmen is the name of this phenomenon.  There was an element of #notallmen in men’s rush to publicly respond to the video, but there was also, I think, an element of genuine surprise. After all, how would you know that harassment happens if you never experience it?

In cities, we’re so conditioned to mind our own business; to do otherwise invites interaction with crazy strangers that could derail your day or even endanger your safety. There’s also a certain amount of self-blinkering that goes on; we filter experience subconsciously all the time so that we’re not overwhelmed with stimuli. But if there’s one unmitigatedly positive thing about this video, it’s that it seems to have made men genuinely aware of what a woman’s experience is like, and how it differs from theirs.  Some measurable number of men now know that  “good morning” can seem, in the context of a constant stream of unsolicited comments and attempts to start conversations, less like a pleasantry and more like an insult. Regardless of the video’s other failings, that’s a really good thing.