Secrets of "Game of Thrones": George R.R. Martin reveals details about the World of Ice and Fire 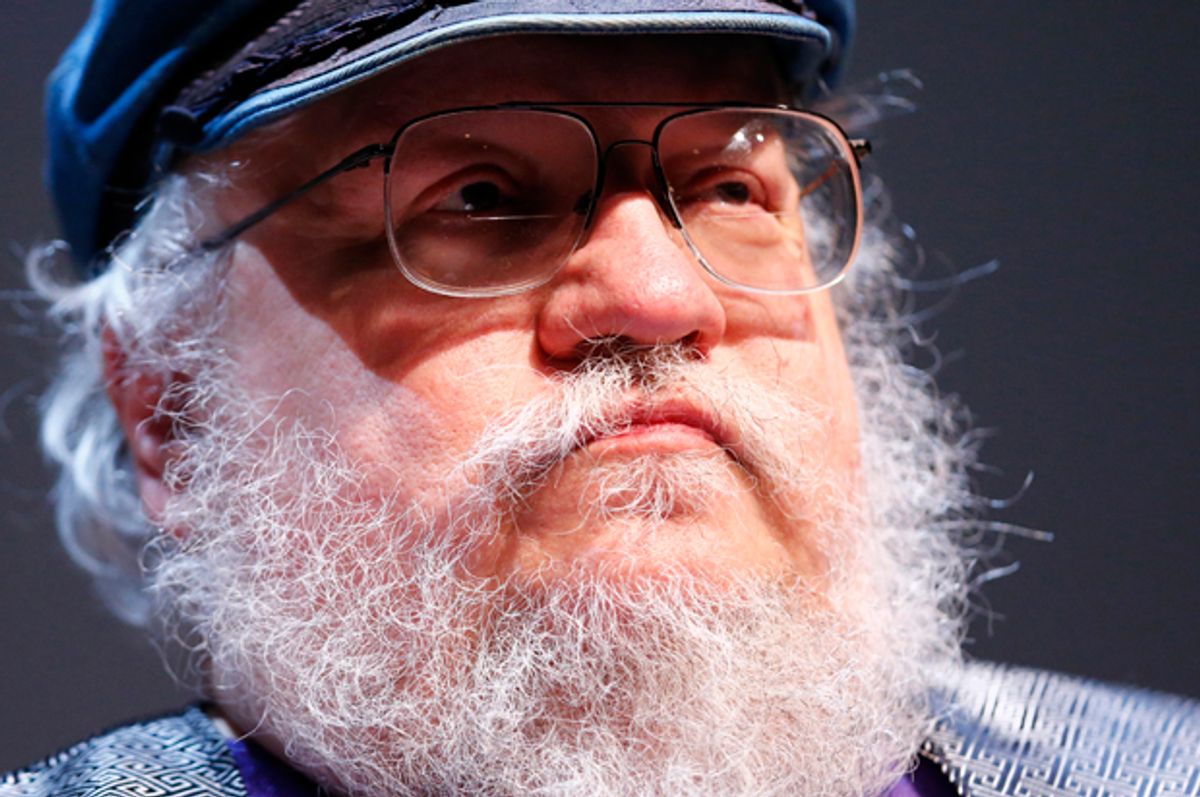 On Sunday I had the pleasure of interviewing the author George R.R. Martin live onstage at New York City's 92nd Street Y. The occasion was the publication of a lavishly illustrated new book, "The World of Ice and Fire," about the imaginary land where Martin's novels and the HBO series "Game of Thrones" are set. The book was written by Martin in collaboration with "superfans" Elio M. Garcìa Jr. and Linda Antonsson, whose encyclopedic knowledge of the subject is the stuff of legend.

George has learned to be pretty cagey about revealing information that might spoil future books. (Two more novels are planned for the Song of Ice and Fire series.) Much of what he talked about at 92Y -- that the Wall was inspired by a visit to Hadrian's Wall, dividing England from Scotland; that he pictures the Eyrie as resembling King Ludwig's Schloss Neuschwanstein palace in Bavaria -- has long been known to his hardcore fans. Yet a whole new audience, whether more casual readers of the series or those only familiar with the HBO show, will find many answers to burning and idle questions in the pages of "The World of Ice and Fire." Here are some of the most intriguing.

Those strange-looking kids who helped Bran and (most) of his party escape zombies in the finale of Season 4 are not kids. In fact, they're not even human.
Along with the giants (seen during the siege of the Wall), the creatures called the Children of the Forest inhabited Westeros before the coming of the First Men. It is the Children who carved the faces into the weirwood trees, such as the one at Winterfell. Although they originally warred with the First Men, the two sides eventually made peace and in the North, where the Stark family comes from, many people still worship the old gods of the Children, as represented by the faces in the weirwood trees. The wise men of the Children were called "greenseers" and had prophetic dreams, much like the dreams of Bran and Jojen. (Jojen comes from a tribe, the crannogmen, rumored to have interbred with the Children, and one of Bran's ancestors married the daughter of the last king of the crannogmen.) The Children were previously thought to have entirely vanished from Westeros.

Westeros has seen a lot of religious conflict.
While the Faith of the Seven is the dominant religion of the Seven Kingdoms, it hasn't had a smooth run of it. It was brought to Westeros by the Andals, invaders from Essos, the large continent to the east of Westeros (where Daenarys has spent most of her life). Daenarys' dynasty, the Targaryens, adopted the Faith when they in turn conquered the Andals after fleeing their homeland in southern Essos. While viewers of "Game of Thrones" have mostly seen a church that is subordinate to the royal family, it hasn't always been so docile. Two orders, the Warrior's Sons and the Poor Fellows -- known collectively as the Faith Militant or the Sword and Stars -- rose up against the successor to the first Targaryen king because the Faith deplored the Targaryen practice of incestuous marriages as an abomination. The third Targaryen king, Maegor the Cruel, brutally repressed and ultimately disbanded the Faith Militant, forbidding religious orders from taking up arms from that day forward. That decree will be significant in upcoming seasons of the HBO series.

Unlike the Lannisters, the Targaryens were incestuous for strategic reasons.
The practice of marrying brothers and sisters was common in the Targaryen homeland, Valyria, because the ability to tame dragons is inherited and they wanted to keep it in the family. But even those born with this aptitude didn't have an easy time of it, as Dany's own trouble controlling her dragons testifies. At the 92Y, Martin related that his good friend and collaborator, the writer Melinda Snodgrass, owns a Lusitano stallion and practices dressage; her experiences training horses have shaped Martin's conception of the difficulty of taming dragons.

Tywin Lannister was born a hard-ass.
When Tyrion and Cersei's father was a baby, his grandfather went to ruffle his hair and the infant bit his finger. "The World of Ice and Fire" also offers a full account of the incident that inspired the infamous song, "The Rains of Castamere," whose performance signaled the beginning of the butchery at the Red Wedding. House Reyne, an uppity family of underlords, defied Tywin's orders, then retreated with their women and children to the network of mines underneath their castle, Castamere, when Tywin marched his army to their gates. Tywin ignored the Reynes' offer of terms, sealed the mines and flooded them, then burned the castle to the ground. The mines remain sealed to this day.

Margaery Tyrell comes from a long line of clever characters.
Many of the other noble houses of Westeros regard House Tyrell as "upjumped stewards" because they came to prominence by ably running the Reach for the hereditary monarchs of that kingdom, House Gardener. The Tyrells were so good at this that they married several Gardener princesses. When the Gardener line died out, the shrewd and prudent policies of the Tyrells paid off: Aegon the Conqueror (Dany's ancestor) made them lords of the region over the heads of many houses with more distinguished lineages. Tyrell rule made Highgarden, their castle, "a place of culture and music and high art" as well as the center of chivalry, much like Provence, in southeastern France, during the Middle Ages.

Oberyn Martell's people knew how to fight dragons.
Dorne, the sandy, southernmost kingdom in Westeros, held out against the invading Targaryens longer than any other. They did so by evaporating into the countryside any time one of the Targaryen dragons appeared, offering no resistance when the beasts burned their towns. Instead, led by their canny monarch, Princess Meria, they waited until the dragons departed, then pursued highly effective guerrilla campaigns against the occupying forces left behind. (Although they did succeed in killing one dragon, as well as its rider, the king's sister.) After Princess Meria died, her son and heir sent an envoy to Kings Landing to sue for peace, with the condition that they not be compelled to acknowledge Aegon the Conqueror as Dorne's overlord. Aegon was determined to refuse this offer, when the envoy, a Dornish princess, handed him a private letter from her father. "Aegon read it upon the Iron Throne, and men say that when he rose, his hand was bleeding, so hard had he clenched it." He then burned the letter and agreed to the Dornish terms. No one knows what the letter contained. The Targaryens never conclusively succeeded in subduing the Dornishmen, and Dorne joined the Seven Kingdoms via a peaceful alliance and royal intermarriage almost two centuries after Aegon received the letter.

Melisandre is definitely not from around here.
One of the most intriguing elements of "The World of Ice and Fire" is the lore it offers about the lands at the edges of "the known world." These include places like the Thousand Islands, whose inhabitants resemble the unsavory fishmen of a Lovecraft story, and the fabled empire of Yi Ti. Melisandre comes from one of the most remote and sinister of these foreign ports, an ancient southeastern city known as Asshai-by-the-Shadow. In her youth, Melisandre was sold to the Red Temple of the god R'hllor, the "lord of light," worshipped by a Manichaean religion that Martin says was inspired by Zoroastrianism. R'hllor has few followers in Westeros as yet, but as Martin explained at 92Y, the ability of some of his priests to raise the dead and effect other forms of magic is "persuasive." According to "The World of Ice and Fire," Asshai, famed for its sorcerers, is built entirely of black stone with a "greasy, unpleasant feel to it." The light in Asshai is always gloomy, even on midsummer days, and the streets are eerily quiet, particularly at night. No children live there.