Why we need narrators: "Jane the Virgin" has the best voice-over on TV

It's the cleverest voice-over since "Arrested Development," and evidence of how important narration is to a show 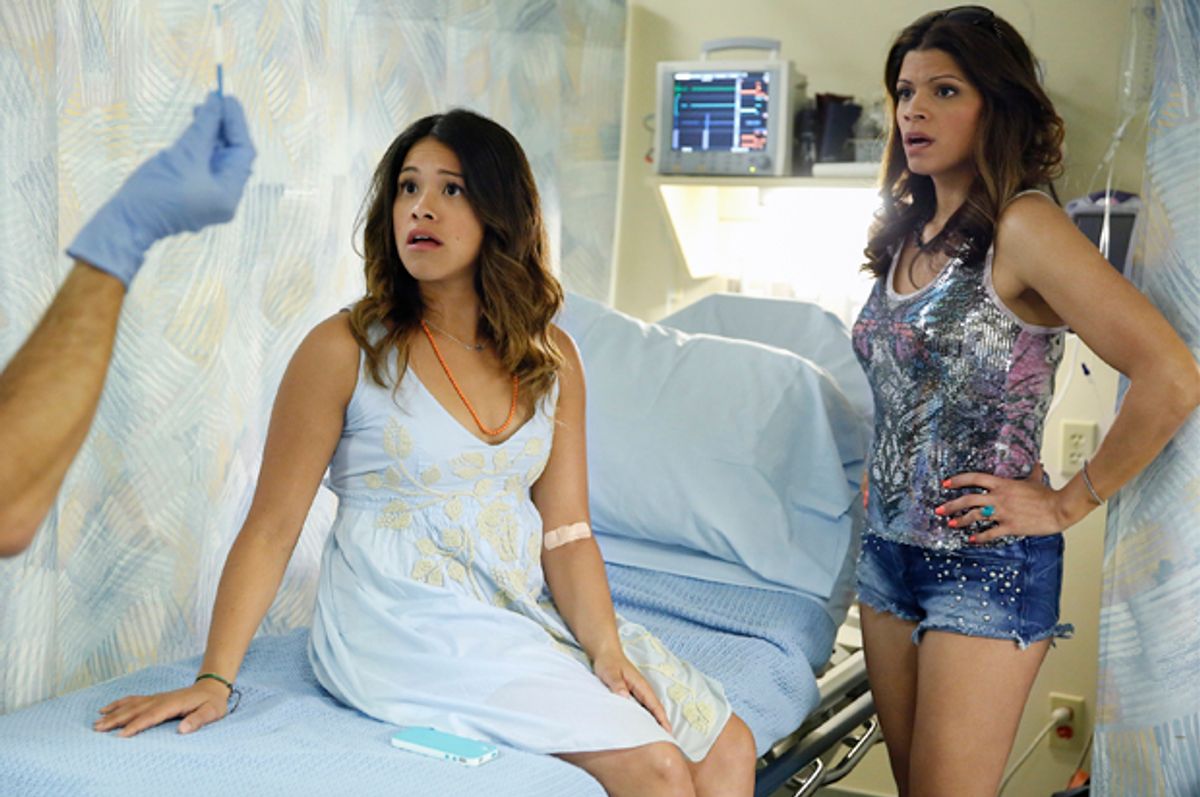 There are a lot of good reasons to watch “Jane the Virgin,” the CW’s new comedy-drama-teen soap-telenovela, but maybe the most unique is its voice-over narrator. Wait! Don’t leave! I promise, this is not snooze-worthy documentary film narration, or irritatingly convenient exposition that the writers use as a crutch. “Jane the Virgin’s" delightful voice-over narrator — credited in the closed captioning, anyway, as “Latin Lover Narrator” — is so engaging and funny as to make all other narrators this season feel blah by comparison. Voiced by the bilingual Anthony Mendez, Latin Lover Narrator is the audience’s guide into the world of “Jane the Virgin” — narrating the “previously ons,” offering context and even making jokes of his own.

This fall TV season, it seemed like a voice-over was popping up in every other pilot, from light half-hour sitcoms like “Selfie” and “A to Z” to dramas like the psychological time-jumper “The Affair” and comic-book thriller “Constantine.” The majority of the time, the narration exists to explain the story or offer perspective that would be better demonstrated on-screen. But in the case of “Jane the Virgin,” it’s used as a funny and fascinating tonal tool, the best example of the show’s investment in its style of storytelling. A lot of television pilots start off messy and confused, developing a point of view and a style as they grow. “Jane the Virgin” came out of the gate with incredible confidence and verve (in part because it was based on “Juana la Virgen,” a Venezuelan series, itself based on a book by Perla Farías). Beginning with the first episode, the show has had a unique, recognizable point of view — established off the bat by Latin Lover Narrator.

For the untutored: “Jane the Virgin” is an hour-long dramedy about Jane Villanueva (played by the incredibly charming Gina Rodriguez), a woman saving herself for marriage to her handsome fiancé when she is accidentally artificially inseminated with the sperm of someone else’s husband — who happens to be her boss whom she had a crush on five years ago. If that sounds soap operatic, brace yourself: In an open, loving homage to Spanish-language telenovelas, the story only gets more convoluted — and more fun. Jane’s fiancé, Michael, is investigating her baby daddy Rafael’s wife, Petra, who’s sleeping with Rafael’s best friend Roman, and, oh yeah, the doctor that knocked her up? That’s Rafael’s sister Luisa, whom Jane is now suing, with the help of her mother, an aspiring singer, and grandmother, who only speaks Spanish. (You can see why the narrator comes in handy.)

But in contrast to the straight-faced melodrama of telenovelas (which play a part in the show, as a star actor from Villanueva’s favorite telenovela enters their lives), “Jane the Virgin” knows exactly how funny all this is. It’s hard to pin down “Jane the Virgin” as either a teen soap or a telenovela or even just a drama for that reason — the show is hilarious, mining the ridiculousness of its own plot machinations for humor.

This is one of the things that makes “Jane the Virgin” so funny: It’s a show that knows that it’s a show. And as it’s both skewering and paying homage to telenovelas, it naturally needed a voice-over narrator who could deliver exposition with the right combination of self-seriousness and amusement.

“Jane the Virgin” is all about style. A few weeks ago Brandon Nowalk wrote about stylistic storytelling in Emily Kapnek’s shows, “Selfie” and the now-canceled “Suburgatory,” and his observations really stuck with me. “Jane the Virgin” isn’t by Kapnek, but it demonstrates a similar devotion to the rules of its world. The characters are all connected to each other in a thousand accidental ways, whether it’s that they’re secretly relatives or that they work together at Rafael’s hotel, the Marbella. If something can go wrong, it will go wrong; if someone can create more drama, they probably will. Not to say that everything that comes out of Latin America is playing with the region’s literary tradition of magical realism, but with its blending of memory, imagination and hilariously convenient plotting, “Jane the Virgin” certainly is. The result is a show that feels both absurd and grounded, surreal but welcoming. It’s not an easy trick to pull off, at all, but three episodes in, “Jane the Virgin” is showing no signs of wavering.

When I mentioned how much I was enjoying the narration on Twitter, Tara Ariano of Previously.tv observed that the narration on “Jane the Virgin” might be the best since “Arrested Development,” and mulling it over today, I've found that comparison to be apt. Both shows derive much of their humor from their awareness that they are television shows, and by playing in a closed-loop universe where actions and consequences circle back around to the major players in just a few short scenes. Both play with memory and imagination with repeated flashbacks and new information; the drama on both shows is always drawn out, never resolved. And both have a sharp and clever narrator that sets the tone of the show; Ron Howard as the narrator in “Arrested Development” was possibly the funniest character.

Latin Lover Narrator has that same potential. Last night, in “Chapter Three,” after spending most of the episode preparing the audience for each plot twist, he himself was flummoxed by a particular plot development, delivering a “… huh” incredibly reminiscent of Howard’s bemusement in  “Arrested Development.” “Jane the Virgin” is a show having a ton of fun with its material, and the narrator is the icing on the cake, extending that fun out to you, the audience, so that you can be a part of his weird and wonderful world.