It was only two years ago he blasted the GOP as "the stupid party." He couldn't beat them -- so he joined them 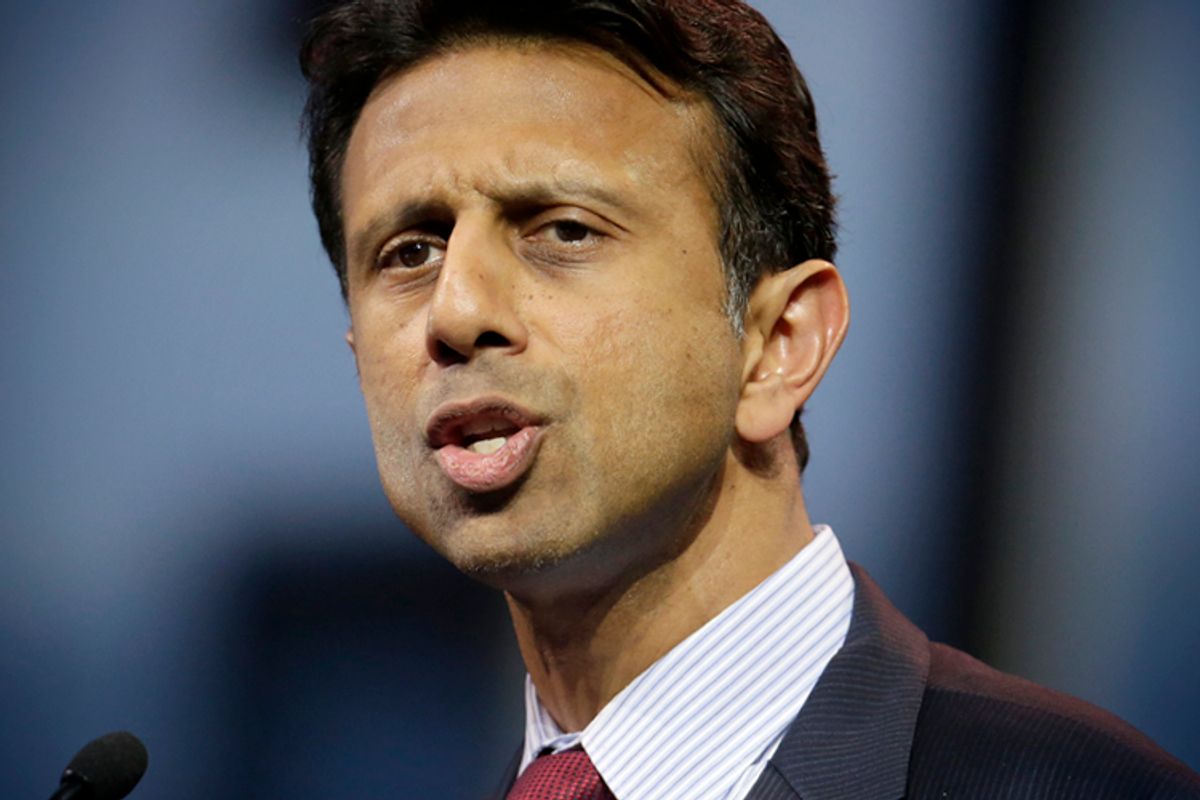 Following the Republican Party's humiliating defeat in the 2012 elections -- a loss that polls indicated was coming but which nevertheless stunned no small number of Republicans -- Louisiana governor Bobby Jindal was scathing in his assessment of the state of the GOP.

It was high time, Jindal told Politico, for Republicans to discard its "simplistic" sloganeering and knee-jerk opposition to President Obama -- time, the governor said, for the GOP to "stop being the stupid party."

Of course, boastful ignorance and anti-intellectualism largely define the modern American right, so Jindal's summons for a more level-headed, ideas-based GOP never stood any chance of success. And Jindal himself refused to specify what would substantially differentiate a non-stupid Republican Party from its stupid iteration. In his post-election Politico interview, he steered clear of embracing immigration reform; opposed increases in tax rates for the wealthy; urged Republicans to continue fighting against equal rights for women and gay people, but to speak about it in nicer tones; and dished out the very kind of platitudinous slogans he decried -- it was time for “a bottom-up government that fits the digital age" and a "populist" GOP that was "not the party of big business, big banks, big Wall Street bailouts, big corporate loopholes, big anything."

In other words, the GOP's fundamental ideas were never the problem. It was how candidates like Todd "Legitimate Rape" Akin and Mitt "47 Percent" Romney conveyed those ideas.

But Jindal, eyeing a 2016 bid for president, has completely abandoned his anti-"stupid party" crusade, desperately doing all he can to burnish his Know-Nothing credentials.

Some of the latest evidence emerged Wednesday, when his administration issued a letter asking Ebola researchers who had recently traveled to afflicted west Africans not to attend an upcoming conference of the American Society of Tropical Medicine and Hygiene in New Orleans. Experts have condemned such sweeping bans as not based in science, noting additionally that travel bans and other restrictive measures targeting health workers and researchers may well discourage other professionals from traveling to Ebola-stricken countries. But Republicans, happy to demagogue the Ebola issue ahead of the forthcoming midterms, have little interest in the recommendations of the Centers for Disease Control and public health advocates. And Jindal is happy to join in.

The same day Jindal's administration told Ebola researchers to keep away, the governor was in Kentucky, rallying support for Senate Minority Leader Mitch McConnell. The same guy who lamented that his party was "simply being the anti-Obama party" tore into the president with an ad hominem attack, impugning Obama's intelligence and suggesting that he should recoup his tuition fees from Harvard.

"I'm beginning to wonder what did he really learn in three years at Harvard Law School," he continued. "The lawsuit I'm willing to endorse? I think he should sue Harvard Law School to get his tuition money back. I don't think he learned a darned thing while he was there."

Perhaps Jindal should team up with conservative carnival barker Donald Trump and demand that the president release his academic transcripts.

Jindal's latest forays into right-wing rhetorical red meat come on the heels of other public statements that put the lie to his self-fancied image as the GOP's ideas man. He was among the first conservatives to rush to the defense of homophobic "Duck Dynasty" star Phil Robertson, alleging Robertson's critics were engaged in a "war on religion" and suggesting that pushback against anti-gay remarks somehow threatened free speech. Meanwhile, the Brown University biology major and Rhodes Scholar won't say if he accepts the theory of evolution or climate science, putting him to the right of the pope on those issues.

So Bobby Jindal, recognizing that thought and ideas are anathema to the contemporary GOP base, no longer has any interest in eradicating the stupid from the stupid party. Instead, he's angling to become its leader -- once he's gained a little more weight.