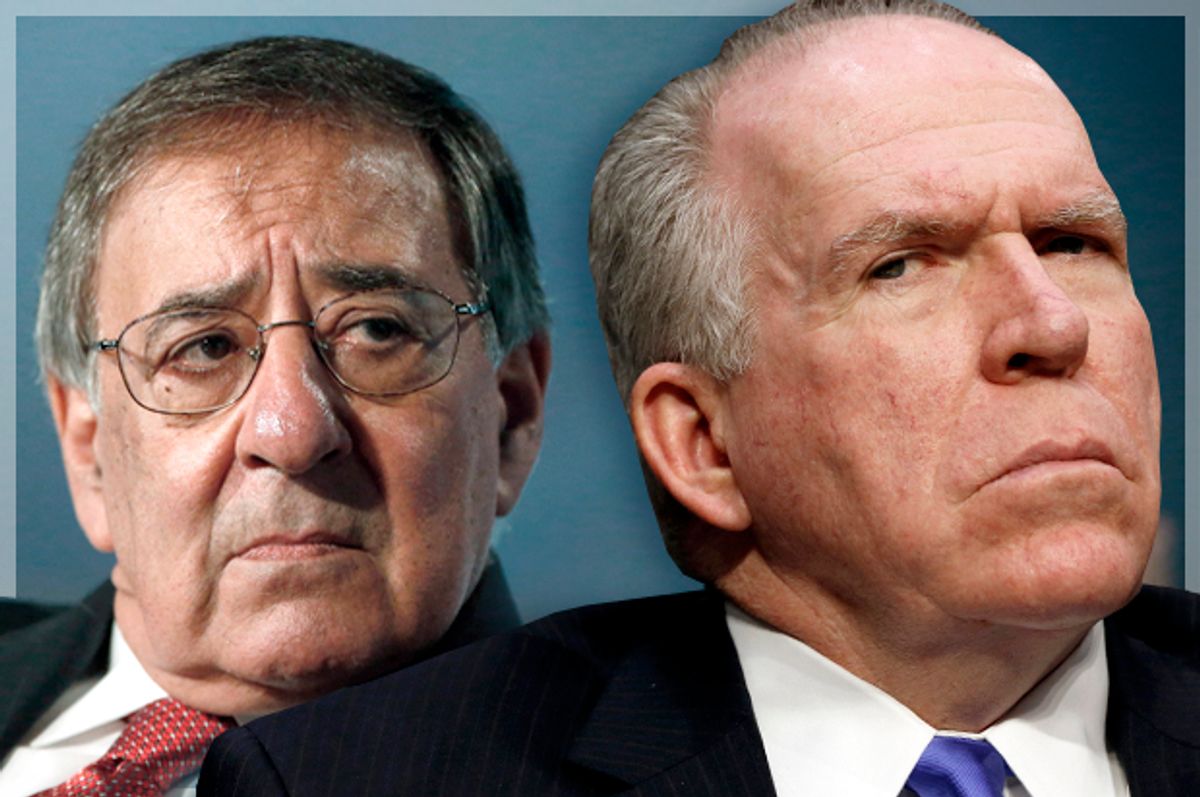 We've all heard of the junior prom for high school students. Many of us went to one, although those left peering in the window from the outside undoubtedly still feel the sting of not being invited. And everyone knows about the "nerd prom," the absurd celebration of D.C. insiderism otherwise known as the Washington Correspondents Dinner. But now we know about the most exclusive prom of all: "spy prom," an annual gathering of the clandestine services where the spooks all gather to let the good times roll.

The big exposé comes from Ali Watkins and Ryan Grim at Huffington Post, who start off with this wry observation:

Relations between the intelligence community and the media are at such a low ebb it might be hard to believe that there's a reporter who spies deeply admire.

That's the one jarring note in the whole piece, actually. I can personally think of at least half a dozen reporters whom I'm sure the intelligence community are pleased as punch to call their friends and protectors. It's not as if there weren't many so-called journalists who reflexively defended the spying on Americans and ruthlessly criticized reporters who revealed it. From the pages of the New Yorker to the the gabfests on MSNBC, even many ostensibly liberal journalists were quick to condemn the Snowden leaks and demand that he come home immediately to face trial, warming the hearts of police agencies the world over.  In fact, I'm fairly sure that the intelligence community sees most reporters who write about them as friends and the few who reveal what they're actually doing are just bad apples in an otherwise excellent barrel.

Anyway, that's just a quibble. The story is amazing. This "spy prom" is an annual event sponsored by the OSS Society, a group of spooks who get together and give each other awards. This is from their web-site:

The OSS Society® and its predecessor, the Veterans of OSS, have sponsored, organized and participated in educational events and programs such as presentations to the Society by Gen. Hugh Shelton, former Chairman of the Joint Chiefs of Staff, and by Gen. Wayne Downing, former Commander of the U.S. Special Operations Command; presentations of the prestigious William J. Donovan Award® to Presidents Reagan, Eisenhower, and George H.W. Bush; and Admiral Lord Mountbatten, Prime Minister Margaret Thatcher, Admiral Eric Olson, USN (Ret.), Maj. Gen. John Singlaub, USA (Ret.), the Hon. Robert Gates, and Admiral William McRaven, USN; and symposia with the U.S. Special Operations Command and other government agencies. It also presents four other awards: the John Singlaub Award®, named in honor of the chairman of The OSS Society, which is presented to an active duty member of the U.S. Special Operations Command; the Hugh Montgomery Award®, named in honor of The OSS Society's executive vice president, which is presented to a retired officer from the Central Intelligence Agency's National Clandestine Service; the John Waller Award®, named in honor of the previous chairman of The OSS Society, which recognizes achievement in OSS scholarship; and the Distinguished Service Award, which is presented to OSS veterans and other individuals who have made significant contributions to its operations or legacy. The OSS Society's honorary chairmen include President George H.W. Bush, the Hon. Robert Gates, the Hon. Leon Panetta, Gen. Bryan Brown, USA (Ret.), Adm. Eric Olson, USN (Ret.), Gen. Norton Schwartz, USAF (Ret.), LTG John Mulholland Jr., USA, LTG Michael Flynn, USA, and MajGen Paul Lefebvre, USMC (Ret.).

Yes, they have apparently trademarked not only their name but also their awards. Because if they didn't who knows what enemies might steal the name of the "John Singlaub award" and give it to someone who doesn't deserve it.

You remember John Singlaub, don't you? He was an OG OSS spook who fought communism 24/7 for decades. He was finally relieved of duty by President Carter for publicly criticizing the White House decision to withdraw some troops from the Korean border and went on to form the Western Goals Foundation, which was said to have been founded for the purpose of blunting "subversion, terrorism, and communism" by filling the gap "created by the disbanding of the House Un-American Activities Committee." And  he didn't stop there. He went on to create the United States Council for World Freedom and the U.S. chapter of the World Anti-Communist League (WACL), which became "the public cover for the White House operation" in Iran-Contra. He's certainly  a "brand" worth protecting.

Anyway, back to the prom. Here's a line you don't hear every day. It came from a music producer who proudly told the gathering:

"My father was the first covert American to overthrow a government."

That's certainly something I'd be proud to tell my grandchildren, I don't know about you ...

This was good too, and got the biggest laugh of the night.

"You want 100 percent privacy? I suggest you stay offline and shut the hell up."

That was from that edgy dark comic Mark Russell, as usual, challenging the usual assumptions and making you think.

Ernest Hemingway was the main honoree of the evening -- the "one reporter" the spies respect. (He also happens to be dead so they love him even more.) This also makes a lot of sense since I'm sure all these spooks see themselves as Hemingway heroes in their own minds.

The second honoree was Leon Panetta, which is odd since he's just written a tell-all book, dishing on all the mistakes the commander in chief made that Leon, alone against the world, told him not to make. (Did I mention the Hemingway hero thing?) As it turns out he was introduced by none other than John Brennan, the current DNI, waterboarding enthusiast and hilarious raconteur:

Had the former secretary of defense just written a book, he wondered aloud? Did President Barack Obama know about it yet? Had Panetta cleared it with the agency?

Panetta, meanwhile, delivered an unapologetic defense of the intelligence community, arguing that its more controversial activity was necessary in a dangerous, post-9/11 world.

Of course he did.

And just to show how classy they all are, they played the infamous "wind-breaking" scene from "Blazing Saddles" in order to have some more laughs but also to make a very serious statement about the OSS's moral character:

The broader purpose of showing the film, Pinck told the crowd, was to connect the OSS with the film's anti-racism message. Wild Bill Donovan, Pinck noted to the crowd, never bought into the type of WASP-only prejudice implied by films like "The Good Shepherd."

Well that's a relief. But one cannot help noticing that list above only includes white men. (Oh, and Margaret Thatcher whom I'm sure would be proud to be thought of as one.) Considering that we are talking about clandestine work all over the world, one would assume that we'd see a few people of color recognized by now. How odd.

Watkins and Grim wind up their story with the unfortunately inconvenient fact that Hemingway, the man they were honoring and whom they obviously idolize as the avatar of manly heroism, was actually rejected when he tried to join the OSS. They thought he would be too much of an individualist to work under military supervision. Obviously, that's not a problem for the other honoree of the night, Leon Panetta. He's too much of an individualist to work under civilian supervision, true. But the CIA and the DOJ were a perfect fit.

It's hard to believe in the age of Snowden that such ostentatious celebrations of spycraft would still be a part of official Washington. These people seem to be of another time and place. Perhaps that's starting to change. Isn't it pretty to think so?