Committing a girl-on-girl micro-crime like this is what holds us back as women. It's also irresistible 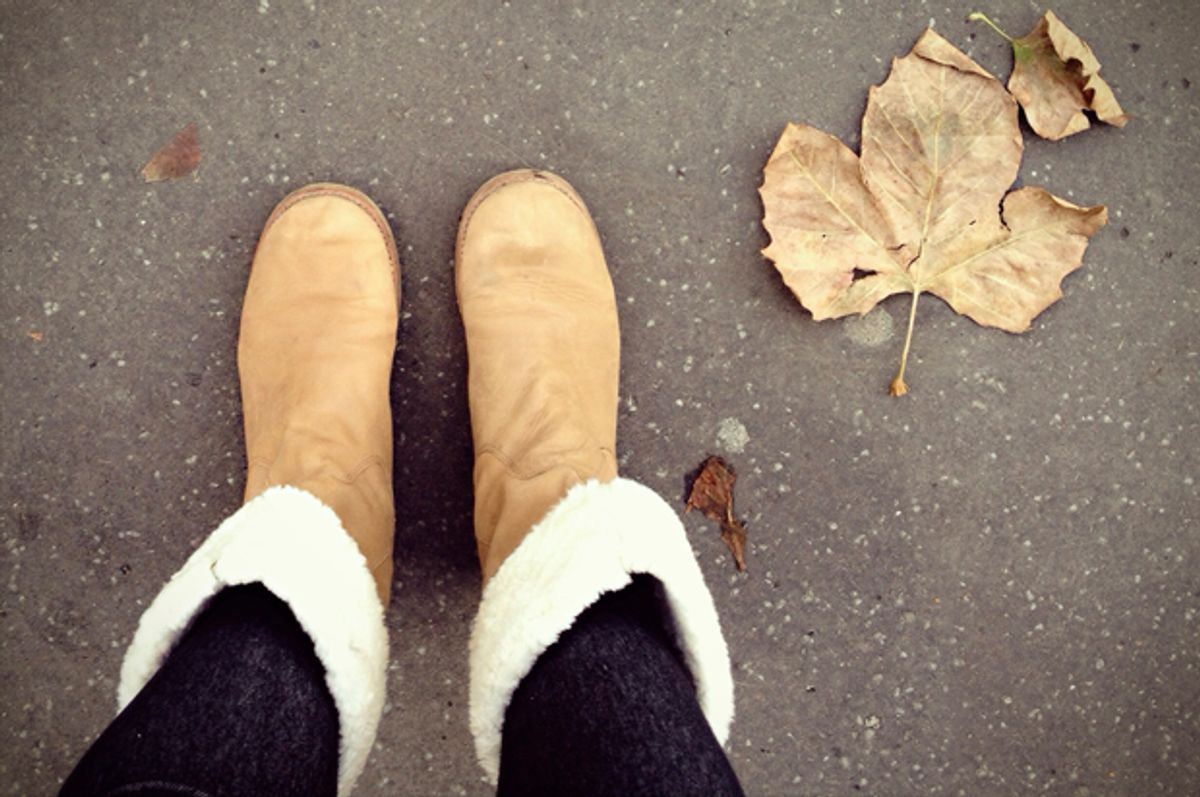 On Saturday, I dressed up as a “basic bitch” for a Halloween party, and I regret it. Kind of.

The costume was inspired less by a desire for social commentary and more out of laziness and a need for comfort. I’d originally planned to dress up as Kirsten Wiig character Dooneese Maharelle, but the week leading up to the party was busy, and I was getting over a stomach thing; shopping for baby hands and a bald cap wasn’t in the cards. So instead I headed to Target and got a pair of faux Uggs and a puffy vest and recruited a game-for-anything friend who agreed to wear his running tights and put his longish hair in a ponytail. We planned to stop on the way to the party and pick up Pumpkin Spice Lattes.

“Are we committing an offensive costume crime?” he asked at some point in our gleeful email exchange.

“Probably,” I admitted, but by then I’d found a Longchamp Le Pliage tote for $20 at Buffalo Exchange, and there was no turning back.

2014 has been a big year for the term “basic”; as Noreen Malone observed recently in a thoughtful essay in the Cut about the term, “it’s a word we’d been looking for.”  Appropriated from hip-hop culture, where it meant something closer to “corny” or “dumb” or “tacky” or some combination of the three, the term “basic bitch” has come to mean something very specific. There are even instructions on BuzzFeed for putting together a high-end variation on the costume I wore; their version specifies that you must buy Lululemon leggings, real Uggs, latte, North Face fleece, and the new Taylor Swift album for a grand total of $474.38.

The thing about basic bitches is that they exist; they’re not a caricature, they’re real and they’re everywhere, especially in Murray Hill and Cobble Hill and the Upper West Side and Washington, D.C., and Boston. What did we call women who dressed like this before we knew we could call them “basic”?  This is where things begin to get gross and discomfiting: We couldn’t call them anything, because who in 2014 wants to say the word “JAP” out loud?

“I saw your tweets about it,” my mom said. “So you’re going as a slightly preppier version of yourself?” I had told her she wouldn’t “get” my costume; as usual, she “got” it better than I did myself.

As a term of derision, “basic” is most often dropped by women who are just a few degrees left of basic themselves, as a way of differentiating themselves from a way they fear being perceived.  Committing this kind of woman-on-woman micro-crime is one of the ways we hold ourselves and each other back, of course, but it’s so ickily irresistible sometimes.

As Ann Helen Petersen wrote in BuzzFeed recently, “To call someone ‘basic’ is to look into the abyss of continually flattening capitalist dystopia and, instead of articulating and interrogating the fear, transform it into casual misogyny.”  She’s right, of course, but I still couldn’t resist the appeal of going to a party in an outfit as comfortable as pajamas.

Because that’s the thing about the Basic uniform, I realized as soon as I changed into it: It feels wonderful. Uggs, even fake Uggs, are miraculously cozy. It’s like your feet are getting warm little hugs all the time! How freeing to leave the house in elastic-waisted pants! A down vest provides the exact right amount of warmth for a crisp fall day! It’s also flattering without being revealing at all; in spite of being so comfortable, I also felt dressed up. I flat-ironed my hair and put on giant shiny fake-diamond stud earrings and made sure the shirt I was wearing covered all of my tattoos. When I looked in the mirror, I felt like I was looking at a complete stranger, even though no one except a good friend would have recognized that I was wearing a costume. I also felt like I looked great. It was deeply weird. I put my stuff in the Longchamp tote and headed out to the party.

One aspect of the party I hadn’t thought through very well: I knew almost no one there. A lot of the guests were co-workers of my friends, the hosts, who work at a hospital and a mall-brand clothing designer, respectively.  Some people “got” our costumes and were delighted. Others did not “get” our costumes, and it was so clear that any attempt to explain them would be a conversational minefield that we quickly defaulted to giving up and telling people who didn’t think we were wearing costumes that … we weren’t.  The alternative felt a little too close to telling a perfectly nice stranger that, for Halloween that year you’d decided to dress up as … them. Ha ha! Get it? Yikes.

We managed to shake off the awkwardness with the aid of some spooky haunted punch, but we didn’t stay long.  On the journey home, as I played with the Tiffany charm bracelet on my wrist (a bat mitzvah gift), I thought about how the costume felt not just comfortable but familiar.

“I felt like I wore this costume my whole freshman year of college,” I told my friend.  He was a little surprised, but I explained to him that I’d gone that year to a tiny Midwestern school where everyone dressed very preppily and I had tried my best at first to blend.  It backfired, I told him: I ended up attracting terrible frat boys and making shallow convenience-friendships with pretty, sad girls who piled their cafeteria trays with unseasoned vegetables at mealtimes. Sophomore year I came back to school in the weird thrift store clothes I’d worn in high school, made friends with stoners, and was immediately a lot happier; soon after, I transferred to school in New York.

“Well, you’re not basic,” my friend said, and I felt way more vindicated than I should have, especially because I know in my heart that I somewhat am.