Still need a costume? Here are some terrible ideas if you want to show your knowledge of the political times 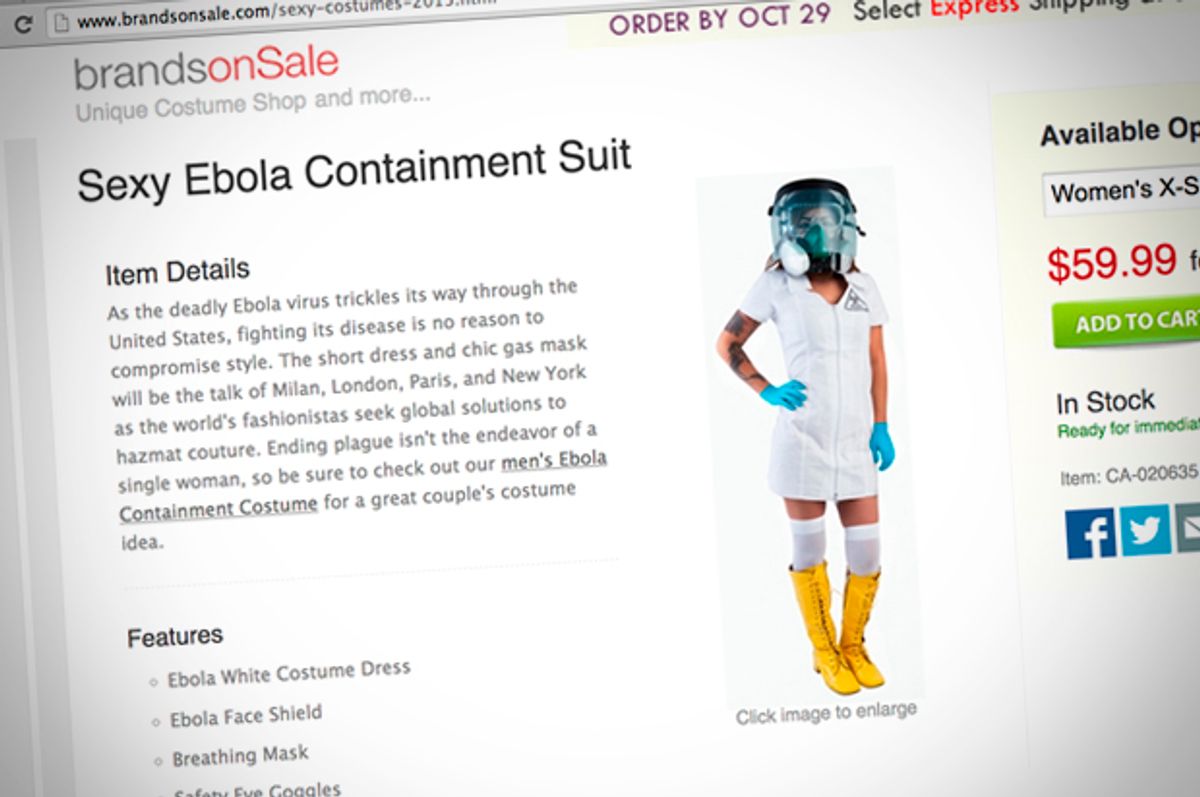 You don't know what to wear for Halloween yet? Neither do I! (Oh god, it just came to me! I'm not telling.) But if you, on this Halloween morning, still haven't figured out what to wear, that's not necessarily a bad thing. It means you're a well-adjusted adult. Wasn't the whole point of becoming an adult that you didn't have to figure out stupid Halloween costumes anymore? I mean Jesus Christ. But here you've been invited by other annoying adults (your "friends") to a Halloween party, where costumes are supposedly optional but we all know they're not really optional. You only have a matter of hours to figure this out. What do you do? The correct answer is "stay at home and watch TV b/c I'm too old for this crap. But: still.

If you are the sort of person with the means to light money on fire, go ahead and follow Esquire's suggestions, one of which is to spend $5,595 on a scarf and coat to look like Bob Dylan.

But there is another path.

If you live in Washington D.C., or any other "political area," or have a lot of "political friends," you won't be the subject of total embarrassment if you choose to wear a "political costume." You might even face some pressure to wear a political Halloween costume, if your social circle is indeed that pathetic. There are always the old standbys: Sarah Palin, a toothy Jimmy Carter grinning mask, a grumpy Richard Nixon mask, a mask of whoever's president now (Gore?) Painting yourself orange and being John Boehner. But here are some other truly DIY options.

Carl Levin has been a senator representing Michigan for oh about a million years, but he's finally retiring. What better way to send him off than by making an ironic Halloween fashion statement about him? Levin is perhaps best known for his look when he's grilling witnesses at congressional hearings. He wears his glasses at the very front tip of his nose while reading one damning document or another back at a witness and then hollering at them. So put on a suit and wear big glasses, sit them on the very front tip of your nose, and read some leaked document at your criminal friends. What about the "sexy" part, you ask? Are you insinuating that Carl Levin is not sexy already? Fine, then just don't wear any pants. (NOTE: you can make any of these costumes "sexy" by not wearing pants. You may get arrested, though, without pants. Please wear pants.)

One popular Twitter meme among America-hating leftists is the "Benghazi acrostic." There is no way to really explain it, but this Vox card gives it the old college try. Basically it mocks sputtering indignation about BENGHAZI!! on the right. Here is the real-life conservative tweet that started the fad:

Making a Benghazi acrostic is dumb but also sort of fun and doesn't have to make sense. To costum-ize this, you just take 8 sheets of paper, one for each letter of Benghazi, fill it out with your acrostic joke, and tape the papers to your body in proper vertical order. And this will be hilarious to the zero or one of your friends who have any idea what you're referring to.

What you'll want to do here is print out a blank map of the United States and tape it to yourself. (Most of my ideas involve taping a piece or pieces of paper to yourself.) And then get a red marker and paint the whole thing red. Republican candidates are projected to do well in this year's Senate elections!

Purchase a tent. You can pick up a cheap tent at the K-Mart. (Esquire magazine probably has recommendations for $15,000 "DIY" tents if you're looking for something a little more high-end.) You go to your party and, before saying hi to anyone, set up the tent in a backyard or back alley. Then, when anyone approaches you, you shout "hey shut up, fuck you, you've got Ebola!" and then you throw them inside the tent.