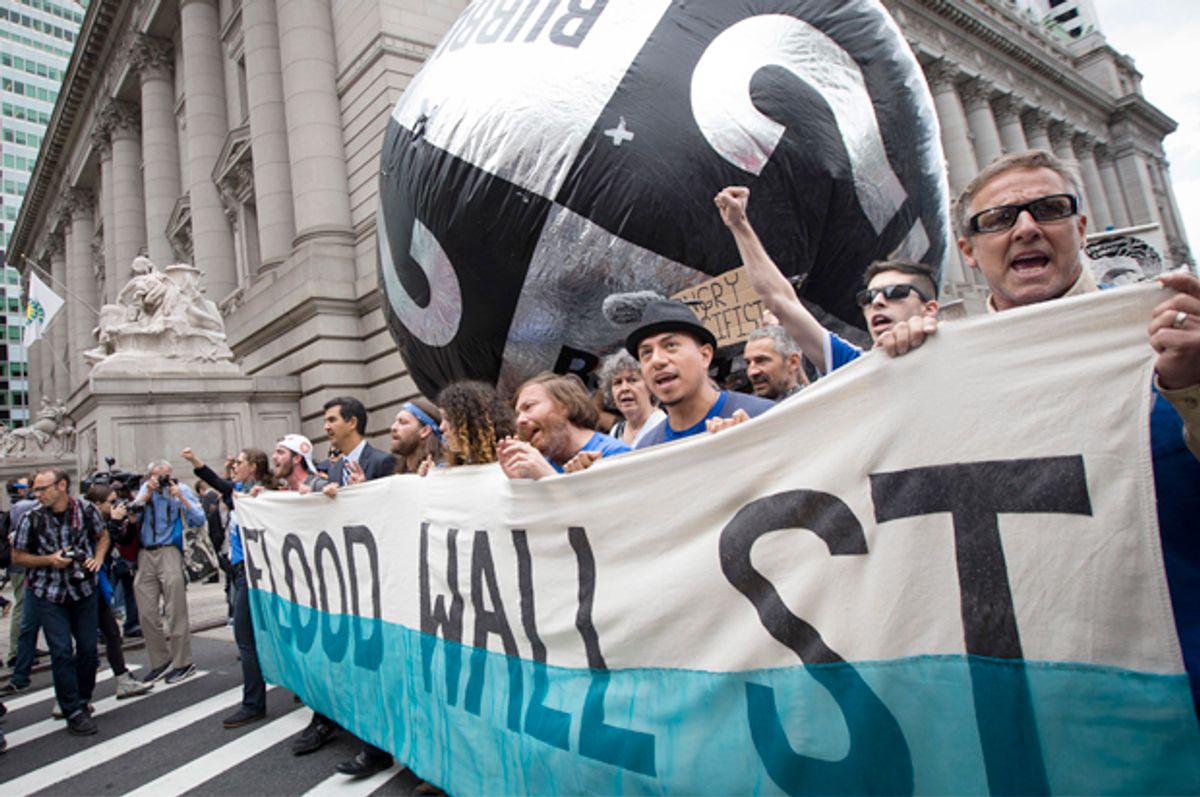 A day after 400,000 people took the streets of New York to march for climate action, a smaller, more radical group took over Wall Street, placing the blame for our ongoing climate crisis on unregulated capitalism. Some 100 members of the Flood Wall Street demonstration, as it called itself, were arrested for disorderly conduct. Most took a plea deal, but 12 of them announced this week that they're going to trial.

Their plea: Not guilty. Their defense: Climate change made us do it.

Defendant John Tarleton explained that group plans to mount a "necessity defense," in which they'll argue that "the harm being caused by Wall Street in financing all sorts of extreme energy projects in this country and around the world is so much greater than any harm that was done by a traffic jam on Broadway."

"And we feel that we have to continue to push this point," he continued, "that Wall Street and capitalism in general cannot solve the climate crisis because they are central to the problem."

Idealistic as it sounds, this isn't the first time the climate necessity defense has been used in court, with surprising results. In Britain, six Greenpeace activists used it to get themselves acquitted of criminal damages for vandalizing a coal plant. And last month, two protestors who managed to block a 40,000-ton delivery of coal to a Massachusetts power plant with a lobster boat tried the defense for the first time in a U.S. court.

They never ended up getting to truly put the defense to the test, however, because the DA ended up dropping the charges as soon as the trial began. He did so rather spectacularly, holding up a copy of a Rolling Stone article by Bill McKibben and telling the defendants that he'd see them at the People's Climate March. Each were required only to pay $2,000 in restitution to the town they inconvenienced.

Still, it's unclear whether the Flood Wall Street defendants will get off as easy. Speaking with Pacific Standard, Bristol County DA Sam Sutter explained that while he was definitely trying to make a statement, he didn't necessarily believe he'd set a precendent:

"It’s a case‑by‑case basis. I took an action. That action does set a precedent of sorts within Bristol County. On the other hand, that was the disposition for first‑time offenders. I’m stating publicly, I disagree with the action. The action was unlawful. Each case is different. We would just have to see what happens next time. I am definitely discouraging anybody from doing this again. I am encouraging lawful protest, lawful demonstrations, lawful public statements, but I am discouraging unlawful actions."

The New York trial begins December 8th. The stakes, for the defendants, are low: a fine of up to $500 and up to 15 days of jail time, compared to the possibility of making a larger statement about the urgency of the climate crisis. And as people come to realize that mitigating climate change is literally a matter of life and death, the necessity defense could start seeing more and more days in court. In Michigan, Chris Wahmhoff, a skateboarding activist known to fans as "The Whammer," stopped work on an Enbridge pipeline for a day by, yes, skateboarding through it. Wahmhoff's reportedly trying to argue that his protest was necessary, although a judge has yet to decide whether it will be admissible.