Michelle Rhee's favorite wingnuts: A look at the GOP candidates the education "reformer" is backing

Flush with hedge fund cash, Rhee's group is going all out to help the GOP keep control of the New York Senate 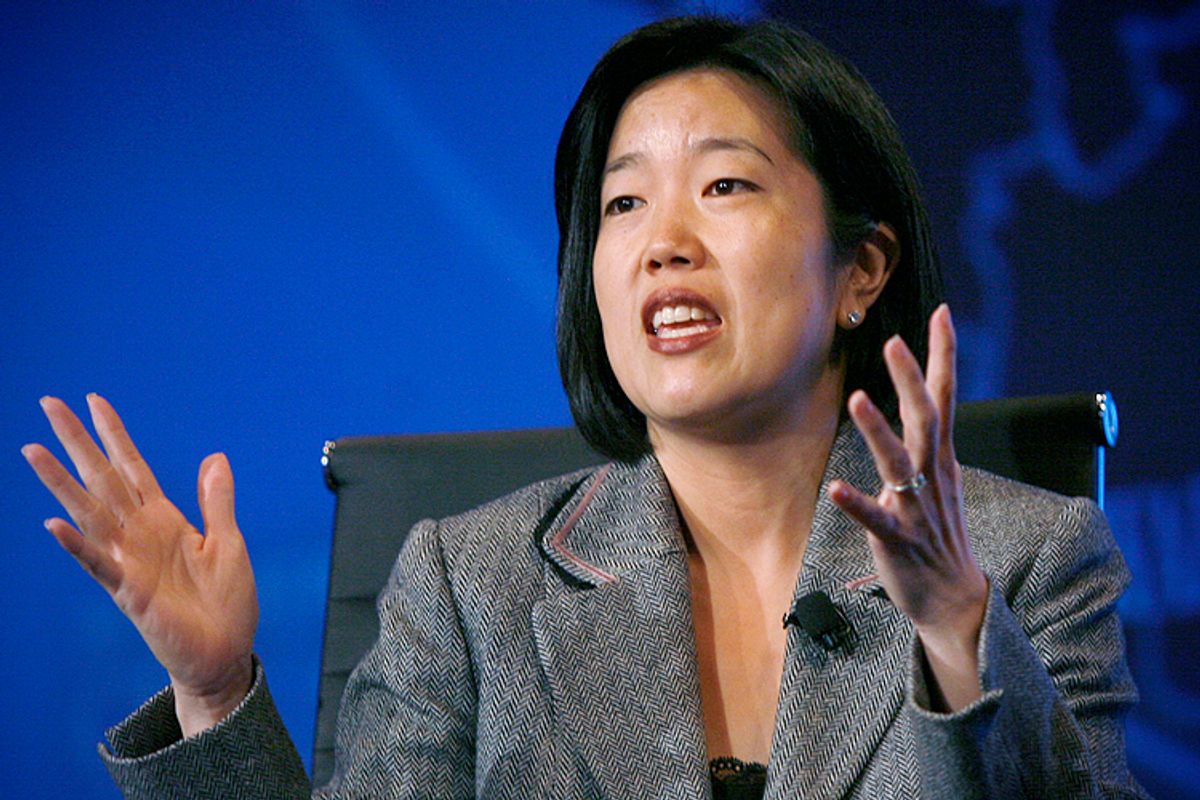 Michelle Rhee, the former Washington, D.C. schools chancellor and the longtime public face of the education "reform" movement, makes no secret of the fact that her nonprofit organization StudentsFirst backs Republican politicians. In 2012, the self-described Democrat's group threw its support behind conservative candidates in state legislative races around the country, overlooking many GOPers' extreme stances on issues like abortion and LGBT rights in its quest to elect candidates who subscribed to the group's agenda of increasing the number of charter schools, weakening teachers' unions and tenure protections, and reinforcing an approach to education that emphasizes high-stakes standardized testing. This year, Rhee is once again lending her organization's financial might to a set of Republicans with hard-right views, as StudentsFirst aims to keep a Republican-led coalition in control of the New York state Senate.

In its fight to keep the chamber in the GOP's hands, StudentsFirst launched New Yorkers for a Balanced Albany, a political action committee that quickly became the biggest spender on behalf of Republican Senate candidates. Among its most generous benefactors have been some of the hedge fund world's boldface names; Daniel Loeb of Third Point LLC and Julian Robertson, formerly of Tiger Management, each ponied up $1 million, Elliot Management's Paul Singer donated $500,000, and Louis Bacon of Moore Capital Management has also contributed to the group.

Flush with Wall Street cash, New Yorkers for a Balanced Albany has lavished more than $1 million on ads for four right-wing state Senate candidates; the ads denounce higher taxes and public campaign financing and all but one cast New York City Mayor Bill de Blasio, a foe of the "reform" movement, in the role of left-wing bogeyman.

In the Poughkeepsie-area 41st Senate district, the group aims to help Republican Susan Serino topple incumbent Democrat Terry Gipson, and has spent more than half a million dollars running an ad that charges Gipson with support "for government, ultimately controlled by left-wing Democrats like Bill de Blasio. Meanwhile, in the Hudson Valley-based 40th district, where New Yorkers for a Balanced Albany supports Republican Terence Murphy over Democrat Justin Wagner, the committee's ad warns that if Wagner prevails,“Democrats, led by Bill de Blasio, could control every branch of government." The ad has run at a cost of $535,000. And down in the Long Island-based third Senate district, New Yorkers for a Balanced Albany has coughed up more than $650,000 for TV and radio ads sounding similar themes in support of  GOPer Tom Croci over Democrat Adrienne Esposito.

Particularly striking is the ad New Yorkers for a Balanced Albany cut for Republican state Sen. Jack Martins in the seventh district, based in Nassau county. The ad touts Martins' opposition to tax increases and assails Martins' Democratic opponent, Adam Haber, for his support of a school funding levy. That line of attack is especially awkward given that Democratic attorney David Boies, a StudentsFirst board member and also the chairman of Campbell Brown's Partnership for Educational Justice, has been vocal in his support for equitable school funding.

The Rhee-backed Republicans are running as unabashed conservatives, opposing New York's new gun safety law, which requires background checks for gun purchases. On education issues, the candidates parrot standard right-wing positions, including antipathy toward the Common Core standards and, in Serino's case, opposition to universal pre-kindergarten. Croci, meanwhile, opposed legislation that would have allowed state citizenship for unauthorized immigrants who lived in New York and paid taxes for at least three years.

StudentsFirst's backing of strident opponents of gun control diverges sharply from the pro-gun safety agenda advocated by former New York City Mayor Michael Bloomberg, who has been a financial supporter of Rhee's group. In 2013, Bloomberg's group Mayors Against Illegal Guns ran ads condemning politicians like Democratic Sen. Mark Pryor of Arkansas and Republican Sen. Kelly Ayotte of New Hampshire for voting against legislation proposed in the wake of the Sandy Hook Elementary School shooting that would have expanded background checks.

Don't expect Rhee to reconsider her support for right-wing candidates. Amid a firestorm of criticism last year, StudentsFirst stood by its decision to designate Tennessee state Rep. John Ragan its "reformer of the year," despite his co-sponsorship of odious "Don't Say Gay legislation, which would have prohibited teachers from mentioning  not “related to natural human reproduction." The bill would also have required teachers and school counselors to "out" students they thought were gay to parents or guardians.

While Rhee's education agenda won her plenty of Democratic fans, like New Jersey Sen. Cory Booker, her group's unhinged, liberal-baiting attack ads on behalf of right-wing GOP candidates may ultimately backfire, undercutting the bipartisan image she has worked assiduously to cultivate. Indeed, her group's latest actions come amid a concerted progressive pushback against the education reformers' agenda; the formation earlier this year of Democrats for Public Education added a crucial voice to the debate over the reformers' prescription for privatization, testing mania, and rolling back teacher protections. If Rhee's willingness to go to bat for ultraconservatives hastens the day that she loses what remaining Democratic support she has, so much the better.