Rick Santorum's personal agony: How his religious politics got sidelined

A few years ago, he was his party's presidential runner-up -- now, Rick Santorum is far from its heir apparent 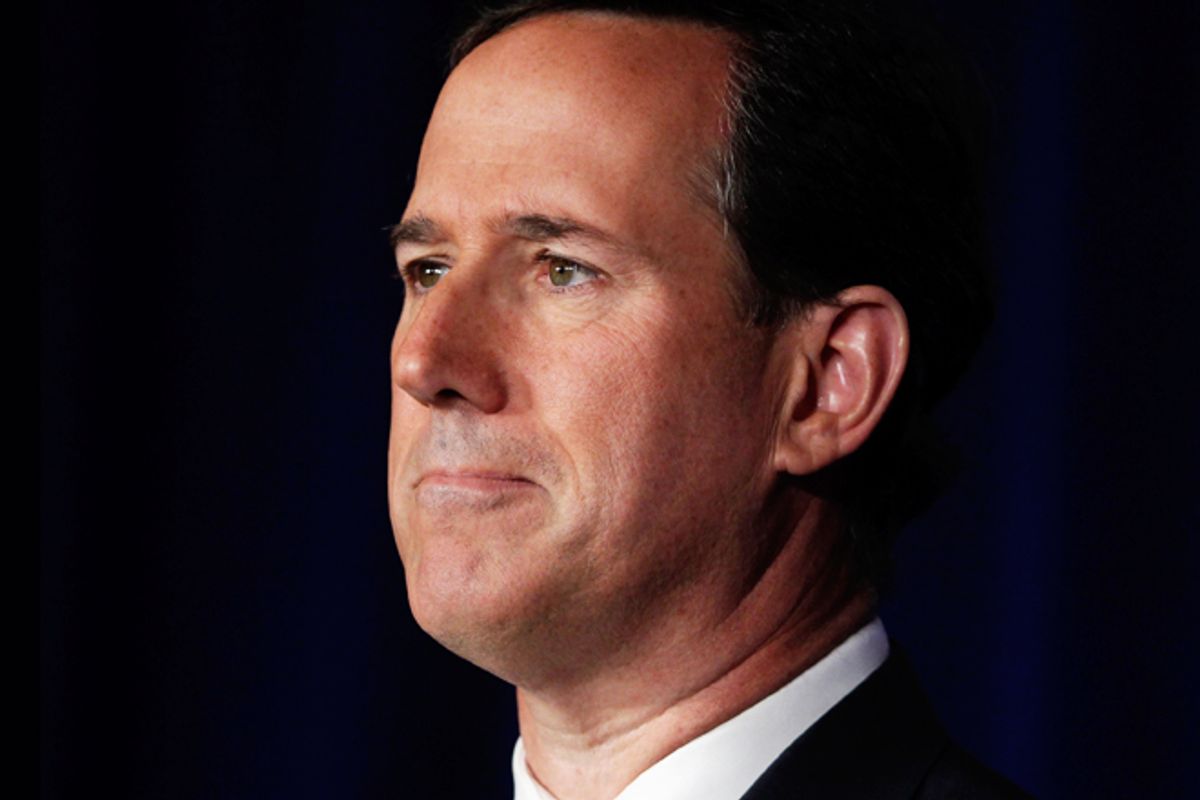 In just a few days the 2014 midterms will be over and it's likely that we will spend exactly one day and maybe an afternoon analyzing them before the entire press corps will startle like a herd of antelope and abruptly turn around and run in the opposite direction. That's right, the presidential race will be in full effect. I know it's depressing. But look at it this way: There are few more entertaining political pageants on this earth than a wide-open GOP presidential primary. And this one promises to be one of the most wide open in recent memory.

Normally, the Republicans have an heir apparent waiting in the wings.  And it's usually the guy who came in second the time before or whose "turn" everyone agrees it is. Reagan, Bush, Dole, Bush II (a Bush I mulligan), McCain and Romney all fit that pattern in one way or another.  But this time, except the rather obvious attempt by the Bush family to force poor Jeb to run as the last gasp of the Bush dynasty whether he likes it or not, there isn't anyone obviously in the queue.

However, if one were to follow their usual system of picking the runner-up from last time, that fellow would be none other than ... Rick Santorum.  That's right, you'll recall that after the magnificent flame-outs of Bachmann, Cain, Gingrich, Perry and Paul there was one man left standing and it was he. And he made quite a run for it there at the end. As the avatar of the Christian right, he laid claim to that very important faction of the party and one that can never be taken for granted. He's making noises about running again.  For political junkies that's Christmas morning and graduation night rolled into one.

Let's recap Rick Santorum's career, just to get up to speed on his basic political philosophy. He was, after all, once an important Republican leader, having served as a senator from Pennsylvania for two terms and rising to the third most powerful job in the caucus before he was ignominiously dumped in the 2006 Democratic wave.  During his time as senator he was perhaps the most influential social conservative in the government, sponsoring such legislation as the 2001 Santorum Amendment, which questioned the teaching of evolution in the schools and promoted intelligent design. It passed the Senate 91-8 (!) and went on to be struck from the final bill in conference.

That was just one of many extreme positions he took as the Senate's top culture warrior (although Sam Brownback was vying for the title throughout his Senate career as well). Unfortunately for Santorum, he will forever be best known for his degrading comments about gays:

(And that led to his name becoming one of the most mortifying jokes in political history.)

It seems almost quaint now to hear those comments considering how widespread the acceptance of gay marriage has become in such a short time. But Santorum still represents a large faction of the GOP and they are not amused. In fact, under the radar of the mainstream media they are having a full-fledged nervous breakdown. Right Wing Watch, however, has been following it closely and reports these frothing outbursts from just the last couple of days:

Turek: States Should Defend the Institution of Marriage Just Like the South Defended Slavery

That's just a random sampling. There are millions of people who listen to that stuff and agree with it and every one of them is a Republican looking for a hero.

One of the things I will talk about that no President has talked about before is I think the dangers of contraception in this country, the whole sexual libertine idea. Many in the Christian faith have said, “Well, that’s okay. Contraception’s okay.”

It’s not okay because it’s a license to do things in the sexual realm that is counter to how things are supposed to be. They’re supposed to be within marriage, they are supposed to be for purposes that are, yes, conjugal, but also [inaudible], but also procreative. That’s the perfect way that a sexual union should happen. We take any part of that out, we diminish the act. And if you can take one part out that’s not for purposes of procreation, that’s not one of the reasons, then you diminish this very special bond between men and women, so why can’t you take other parts of that out? And all of a sudden, it becomes deconstructed to the point where it’s simply pleasure. And that’s certainly a part of it—and it’s an important part of it, don’t get me wrong—but there’s a lot of things we do for pleasure, and this is special, and it needs to be seen as special.

That's hardly a mainstream position even among the true believers. But he's a member of the Catholic faith and the social conservatives undoubtedly admire him for his commitment. He keeps it real.

Now,  like his fellow right-wingers Dinesh D'Souza and David Bossie, he's become a filmmaker, spreading the bad word about the liberals who are ruining everything. His first film is called "One Generation Away" and it sounds awesome:

One Generation Away references a 1961 quote from President Reagan: “Freedom is never more than one generation away from extinction.” The film tries to make this point about religious freedom by highlighting a variety of stories that show Christians — specifically conservative evangelical Christians and conservative Catholics — complaining that they cannot fully realize their religious beliefs.

The film’s subjects are familiar: Hobby Lobby, the Oregon bakers and Washington florist who refused to serve same-sex weddings (“The government shouldn’t force you to bake the cake!” audience members later argued), the Mt. Soledad Veteran’s Memorial with its tall cross on government property, the counseling student who refused to affirm a client’s same-sex relationships, military chaplains who want to evangelize, and the Texas cheerleaders who insist upon using Bible verses on the football team’s banners. The film plods through them one after another, peppering in anecdotes about what the Founding Fathers intended and how there really is no separation of church and state in the Constitution.

It does sound thrilling. There is a market for these Christian films, although it's hard to find the box office numbers for this one since their plan was to release it to thousands of churches around the nation. While Mike Huckabee is still on Fox once a week making his millions before dipping his feet into the same bubbling pool, Santorum decided to go right into the belly of the beast. He's back in business.

His new message is actually an old one, but it's been retooled for a time when the Christian right feels even more persecuted than usual, what with all the Republicans deserting the war on women and everyone shrugging their shoulders at marriage equality and all. (Not to mention the pope!) He's running (if that is what he's doing) on the message that the United States is turning into Nazi Germany.

"If we continue down this path, things are not going to get better," Santorum said, "and the chance of something really bad beginning to happen, where your faith is really constrained, or your lives are really in danger becomes a possibility down the road"

Victimization is the right's bread and butter. But the idea that Christianity is under siege when the Supreme Court just ruled that there is something called "religious liberty" for corporations takes some real imagination. But again, this is a good rallying cry for Santorum. Religious faith has hardly been marginalized in American life, but the Christian right has, for the moment, been pushed into the background by the Republican Party, which is trying to find ways to lose its extremist reputation. So we can probably expect a bit of discomfort in this upcoming presidential primary circus as the GOP sorts this all out. Rick Santorum will have no trouble staking his claim. He took a side long ago and he's going to fight for it.

First they came for the Christmas songs and I did nothing ...