The new all-American TV: How "Cristela" is changing the meaning of family television 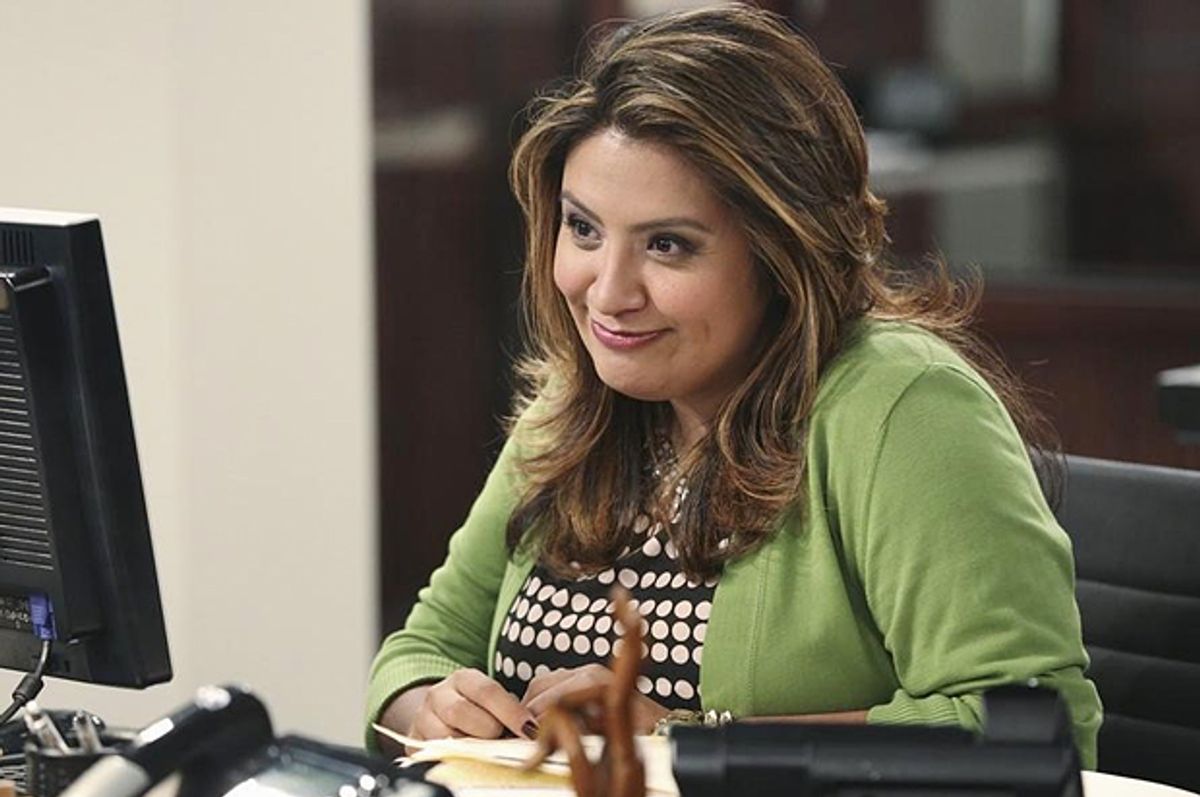 Who watches television on a Friday night?

It’s a night of programming often dubbed a “wasteland,” where sitcoms are sent to die in the Friday night “death slot.” Earlier this year, “Enlisted”’s shift to Fridays seemed to doom it to an early grave (enough so that The Army Times wrote an editorial asking Fox to move it from Fridays). Saturday night has been largely abandoned by television networks—they instead play edited films or reruns—with the notable exception of “Saturday Night Live.” A few years ago, it seemed like Friday was heading in the same direction, as several different publications observed the hesitation networks had for programming on a night largely seen to be a bust.

So it was with some consternation that I saw one of the season’s funniest new comedies relegated to a Friday night slot on ABC. “Cristela” is a half-hour comedy from comedian Cristela Alonzo, mining her own experience as a Latina who doesn’t fit into the stereotypical mold. In some ways, it’s such a throwback: It’s a multi-camera sitcom about a family, with the laugh track and broad humor to prove it. In other ways, it’s incredibly fresh: Cristela Alonzo’s brand of humor could be compared to (yep) Lena Dunham’s, by which I mostly mean that they are both young, sharply comic writers bringing their personal lives into their art, acting at once as ambassadors for their milieu and gentle satirists of it.  Specifically, “Cristela” takes an unsparing look at Latino culture—and the way it’s perceived by others. (For example: In last week’s episode, Cristela’s sister Daniela, in an attempt to impress her white friends, tells them that Cristela is a hired nanny. It’s so terrible it’s hilarious.)

But on further investigation, there’s more validity to the Friday night slot than meets the eye. “Cristela” is weirdly placed for many television viewers—those viewers that networks like HBO, AMC and Showtime are trying to snag with plum Sunday night programming, those viewers who take up space on Twitter with livetweeting and occasionally clever hashtags. But it’s not weirdly placed for other viewers. I think “Cristela” is attempting to do something else entirely, and though I wish more people were watching it, Friday night might be the perfect place for it.

A big reason for this is “Cristela”’s format—it’s a multi-camera sitcom, in an era where our most provocative comedy is in single-cam. Multi-cam, so you know, is a fast and cheap way to shoot a sitcom—a hybrid, as Jaime Weinman observes in his excellent piece: “a bit of film, a bit of radio, and a great big heaping helping of theatre.” All the cameras are running at the same time, and the scene just plays, with the editing happening after the fact. It’s a uniquely televisual medium that often has a live studio audience, soundstage sets, and the electric quality of fast repartee. Single-cam sitcoms, by comparison, are made the same way films are: One take at a time, for each camera angle. So “Seinfeld,” “Friends” and “Cheers” are multi-cam; “Arrested Development,” “The Office” and “The Middle” are single-cam. Clearly, both methods can create bona fide hits with wide-ranging audiences.

Right now, though, multi-cam comedies draw way more viewers than single-cams, and a big reason for that is because the format favors broad comedy with mass appeal. “The Big Bang Theory” was the most-watched show, period, in the 2013-14 season—beating out not just other scripted shows but sports programs like “Sunday Night Football” and competition reality shows like “The Voice.” And while there’s always more to ratings than just raw numbers, the general principle is that multi-cam sitcoms have the potential to really explode into mainstream popularity.

Which might be one of the reasons that multi-cam is often derided as a form capable of producing critically highbrow television. Certainly awards shows agree—“Modern Family,” the comedy that sweeps the Emmys every year, is single-cam, while “The Big Bang Theory”’s enormous success is mostly just acknowledged with acting awards for lead Jim Parsons. And it’s true that multi-cam has a tougher time being edgy, if only because it’s limited by the constraints of the form. The appealing thing about a multi-cam format is that it looks and feels like stuff we’ve all watched on TV our entire lives. The problem is that sometimes that same format gets tiresome.

Which is why a multi-cam sitcom makes sense on a Friday. It’s not the best night for television, by a long shot. But it’s a great night for “family” television (which is to say, television that falls out of the coveted 18-49 demographic that advertisers want to market to). Who stays home on Fridays? As Vulture's ratings expert Joe Adalian said to me: “Shark Tank,” the entrepreneurial reality show, is a “bona fide hit” on Fridays; “Hawaii 5-0” and “Cristela” lead-in “Last Man Standing” both perform solidly. CBS’s “Blue Bloods” is also netting millions of viewers on Friday nights. And what all of those shows have in common, besides their timeslot, is very little buzz.

If you haven't heard of these shows, that's okay, because “Blue Bloods” isn’t really for you, savvy reader of the Internet. And “Cristela,” while a total gem, is also trying to appeal to that Friday stay-at-home audience. In fact, Alonzo talked about why the show went multi-cam at the Television Critics’ Association summer press tour, and she outlined who she wanted to reach with her show: “I grew up in a border town in South Texas right next to Mexico, a million miles away from this world. And to me, multi-cams are just, it’s like theater.” She pointed out that Broadway shows like her beloved “Selena” didn’t come to border towns. “So I always think about those towns and girls like me, kids like me that don’t have the exposure to that. And that’s why multi-cam seemed like the only option.”

“Cristela” has taken on the bizarre task of being fresh in a medium that can feel incredibly dated. Because here’s the other hiccup about multi-cam: Occasionally, its racial politics feel about as dated as its overproduced laugh tracks. “Cristela” is advancing a Latino family sitcom that makes sharp jokes critical of white privilege in a format whose broad strokes often invite caricature: “2 Broke Girls,” in 2014, has such a troubling Asian-American character that Emily Nussbaum at the New Yorker called it “so racist it is less offensive than baffling.”

ABC has two other shows with predominantly nonwhite casts right now—“Black-ish,” on Wednesdays, and “Fresh Off the Boat,” debuting this winter. They’re both single-cam, relying on editing and voiceover to reveal minute details to the audience—and thus avoiding the pitfalls of caricature and misinterpretation. Meanwhile, “Cristela” is heading into the broad-comedy breach with a predominantly Latino cast.

But: It is killing it. "Cristela" is the funniest new comedy I’ve seen this year, and one of the first shows in a while that I’ve wanted to introduce to my parents. It’s family-friendly and broad, but it’s not dumbed-down, either. And in the grand tradition of multi-cam comedies, it creates wonderful exchanges between its ensemble characters. At one point, Cristela yells across the office to the coworkers gossiping about her: “Even though I’m Mexican, I can still hear you!” It might not sound totally hilarious on paper, but that’s kind of the point—it’s the timing, the actors and what we know of the characters already.

There’s something else about Friday that works in “Cristela”’s favor—a funny little hiccup in demographics that says a lot America in 2014. As Bill Carter explained in the New York Times in 2011, Spanish-language viewership is actually higher on Fridays, because of the traditional format for telenovelas. Then-president of Univision told Carter, “The telenovela has a different viewing habit. The story runs in sequence Monday through Friday, and the Friday episode is often a cliffhanger.” He adds: Hispanic families tend to watch their favorite shows as a family. Which, Carter points out, is how most Americans used to watch television.

Maybe “Cristela”’s place on Fridays—and the muted success of shows on Fridays—offers a glimpse into a section of American audiences that aren’t always the focus of advertisers and the rest of the media. Which makes perfect sense, as that’s the audience Cristela Alonzo is going for. But better yet—now that the American Broadcasting Company is airing a sitcom, during what used to be its “TGIF” hour, that features a Latino family for a little dose of all-American, family-friendly viewing, maybe what’s really happening is that what it means to be American is changing right before our eyes.