"A crazed man... a lunatic!" Why ex-con, pasta sauce salesman, former mayor Buddy Cianci is back for more 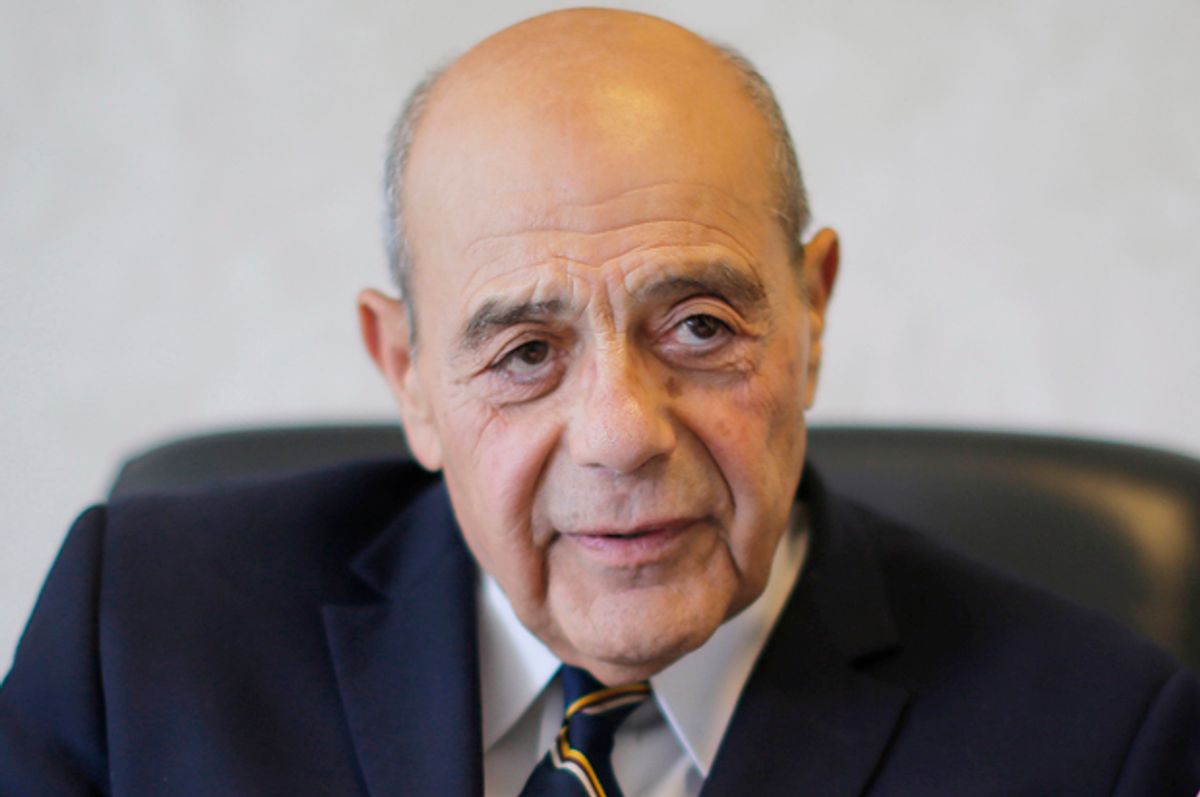 Why did President Barack Obama endorse a candidate in the Providence, Rhode Island (pop. 178,000) mayor’s race on Monday?

The short answer is, according to a press release, the commander-in-chief says 37-year-old Democrat, former housing court judge, and Roger Williams University law professor Jorge Elorza “will bring honest leadership to Providence and fight to grow the local economy, improve public safety, expand affordable education, and create a transparent and friendly government and business climate to spur innovation and entrepreneurship.”

Cianci has never lost a Providence mayor’s race, though he has stepped down from office. He left once in 1984 following a conviction for attacking a man he suspected of having an affair with his estranged wife. Ray DeLeo, the man who received a barrage of smacks, punches, spittle, death threats, airborne ashtrays and attempts to snuff a lit cigarette in his eye, once said of that incident, "I saw a crazed man... I saw a lunatic." Cianci pleaded no contest to assault charges, received a five-year suspended sentence, and stepped down from City Hall, as members of his staff wept.

Cianci resigned again in 2002 (he was re-elected in 1990 and won every election in the interim), after he was convicted in U.S. District Court of a single count of federal racketeering (RICO) conspiracy, a crime the judge described as running City Hall as “a criminal enterprise.” The enduring image from the trial came from grainy, secret-camera tape showing Cianci’s director of administration accepting an envelope filled with cash and placing it in a drawer in his desk. In a now-famous courtroom speech at the sentencing, Judge Ernest Torres compared Cianci to Dr. Jekyll and Mr. Hyde. “There appear to be two very different Buddy Ciancis,” he said. ''The first is a skilled and charismatic political figure, probably one of the most talented politicians Rhode Island has ever seen.'' The other, he said, “'presided over an administration that is rife with corruption at all levels.” Cianci spent the next four and a half years at Federal Correctional Institution Fort Dix, in New Jersey.

Fast-forward to June 2014, when a leaner, grayer, balder, post-prison, post-cancer Cianci was earning six figures as the afternoon drive-time host of “The Buddy Cianci Show,” on News Talk 630 WPRO AM, in East Providence. The show’s theme music was a big-band arrangement of the old show tune “Rhode Island Is Famous for You.” For months Cianci had stoked speculation about whether or not he’d run for his old job, with incumbent Democrat Angel Taveras officially running for governor. The buzz reached a crescendo on-air on the day of the candidacy filing deadline, when, as the minutes ticked down and Cianci took adoring call after adoring call urging him to run, he finally said, “Today with a sense of humility, contrition, and confidence, I announce to you my candidacy for mayor of Providence.”

President Obama’s endorsement of Cianci’s opponent this week has hardly been the most notable moment since then. That may have come when three former U.S. Attorneys, including former Rhode Island Governor Lincoln Almond and current U.S. Senator Sheldon Whitehouse, held a press conference to tell everyone how bad of an idea it would be to elect Cianci. Or when Cianci’s Republican opponent, Dr. Dan Harrop, who is polling at 2.8 percent, made a $1,000 donation to his Democratic opponent, Elorza. Or when a longtime Cianci opponent was arrested for allegedly assaulting a female Cianci supporter at a recent mayoral forum. Or when former Providence mayor and Cianci foe-turned-BFF Joe Paolino told Boston Magazine, “He’s got cancer in the rectum! So nobody’s been more vetted than that.” Or when the Providence Journal ran a seemingly never-ending series of anti-Cianci editorials (“Lying for Votes,” “Endorsing Corruption,” “Pay-to-Play Police,” “Cianci’s Half-Truths”), including one that simply presented excerpts from Cianci’s 2011 memoir, "Politics and Pasta." (Example: “I admit that I used jobs as currency to get the support I needed, I admit that I used campaign money for everything from a personal helicopter to get around the state to paying for dinners, and on occasion I even used my influence to do favors for people.”)

So, how does a guy manage to poll in the high 30s in a three-way race for the job he previously used to commit a felony or two?

First, Cianci is a man of prodigious political gifts. He’s tenacious. (Just ask Ray DeLeo.) He’s hilarious. (A line from his book: “I used to tell people that if I had gone outside and walked on water across the Providence River, the next morning the headline of the Journal would have been CIANCI CAN’T SWIM!”) He’s a tireless campaigner. (Personal anecdote: I have a photo with Cianci from a Little League opening day in the mid-1990s, when I was 9 years old; he’s famous for attending such events. Years later, when I taught a writing class about Providence at the Rhode Island School of Design, he accepted my  classroom invitation and regaled 15 students for an hour and a half.) And his would-you-want-to-have-a-beer-with-him? rating is off the charts. In fact, Providence is so small and Cianci is so ubiquitous that people actually have had that proverbial drink with him. And they’ll never forget it. Providence might the home of the late, legendary sci-fi/horror author H.P. Lovecraft, but Buddy Stories are our most popular literary genre. “My Buddy story?” reads one I recently saw on Facebook. “I stood's [sic] shoulder to shoulder with Cianci and his mistress as we watched a drag queen beat a muscleman with a dildo as part of an S&M show in a coke bar.”

Most importantly, though, Cianci’s record in office – the good side of it, that is – is damn near superhuman. When he was first elected in 1974 as a young anti-corruption candidate (seriously), he inherited a bleak, post-industrial city described in a novel from that era as looking “like a place you ended up when they kicked you out of everywhere else.” When Cianci stepped down in 2002 after a combined 21 years in office, Providence had a new mall, a new outdoor skating rink, a new minor-league hockey team, a newly-uncovered river dotted with Venetian-style gondolas, a feel-good NBC nighttime soap opera called "Providence" that made the city look like a safe and sun-dappled idyll, and a Money Magazine “best place to live” distinction. And, as Cianci is quick to remind us on the 2014 campaign trail, the city had newfound self-esteem. “We did it before, we’ll do it again,” Cianci told me a few weeks ago.

And so here we are. At age 73, the same age as Bob Dylan and Neil Diamond, Cianci is running a campaign that feels like a classic rock reunion tour. His staff is filled with old pals and Cianci-era City Hall employees. A Providence Journal columnist recently observed that lines from his speeches are “nearly a verbatim recitation of what the former Providence mayor said when he made his last comeback 24 years ago.” His policy proposals have a familiar ring, too; his plan to redevelop the city’s industrial waterfront bears striking similarities to plans he unveiled while mayor in 2000. Cianci’s campaign headquarters is essentially a Buddy Cianci Museum, filled with plaques and photos and newspaper clippings from his heyday. Staffers there reverently refer to him as “The Mayor.”

His detractors are not amused. In September, the news site GoLocalProv leaked a frantic email circulated among local power players that read, “WE HAVE FIVE WEEKS TO GET THIS DONE!!!! RAISE $500,000 - 1,000,000, INVEST $500,000 - 1,000,000 IN EFFORTS THAT INSURE [sic] BUDDY IS NOT MAYOR AGAIN AND THE CITY CAN MOVE FORWARD.” Other opponents have printed bumper stickers that read, “We Need a Mayor Not a Buddy,” and launched anonymous blogs that post PDFs of the 1978 New Times article laying out allegations of a gunpoint rape Cianci purportedly committed while in law school in Wisconsin in 1966.

Are there any policy arguments amidst all of this? Sure.

In forums and debates, Cianci, Elorza, and Harrop squabble about how to fix the crumbling and underperforming schools, the understaffed police department, the anemic economy, and the city’s gaping $800 million pension-fund shortfall (which Cianci’s opponents blame him for, since he signed a generous pension deal in the early 1990s). But no one can really disagree with Cianci’s former WPRO colleague, veteran talk radio host Dan Yorke, who recently said on-air that the Nov. 4 election is a referendum on Cianci.

It can all seem a bit hallucinatory. Flick on the TV in Providence and there’s Buddy on "Hardball," "Meet the Press," and the "PBS NewsHour." Turn on your laptop and he’s in the New York Times, the Boston Globe, the Wall Street Journal, the New Yorker and the Weekly Standard. On the street where I live, someone recently methodically sliced out Buddy’s face on lawn signs. Meanwhile, the Providence police recently confirmed that two men reportedly collecting mail-in ballots at the homeless shelter across the street from Cianci headquarters were, indeed, off-duty police officers. Speaking of the police, the Providence police, teacher, and firefighter unions have all endorsed Cianci, as have at least 24 current and past public officials.

For all of these reasons, it helps to talk to people far, far away who can see things a bit more objectively – people like Emily Farris, an assistant poli sci professor at Texas Christian University in Fort Worth. Farris got her masters and PhD at Brown University, and one of the chapters in her thesis, "Latino Leadership in City Hall," focuses on Providence. She’s currently teaching an upper-level class called “Urban Policies and Issues” that discusses Cianci during a unit on machine politics. “The students have been very fascinated by ‘Buddy 3.0,’” she says. They “were especially interested in knowing what Buddy looked like today, sans toupee.”

Those students were recently asked on a midterm to write an essay arguing whether Buddy deserved a third stint in office. Here in Rhode Island, a late-September Providence Journal/WPRI poll had Cianci leading Elorza by five and half points, while a more recent Brown University poll placed Elorza in the lead by 10. In Farris’s classroom, Elorza’s lead stretched even wider. Five students argued that Buddy deserved another shot in office, while 20 argued he didn’t.

That said, one of those “No” voters did give Cianci a certain kind of credit. “Buddy is one of a kind,” a student named Lizzie Sparks wrote. “Buddy made the identity of Providence synonymous with his own identity... Buddy always seems to find a way to come out on top. It’s truly astounding, and not necessarily in a good way.”