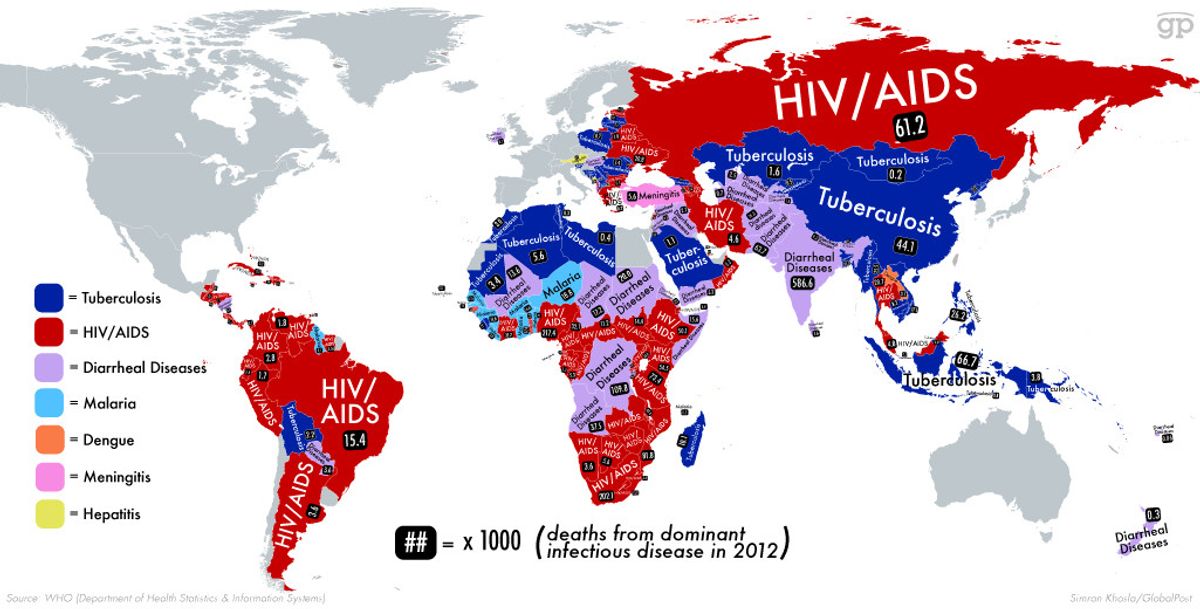 The worst Ebola outbreak in history has killed nearly 5,000 people and infected more than 10,000 in West Africa. In places like Monrovia, Liberia, people are living a nightmare, but if you live anywhere else in the world outside of West Africa — literally, anywhere — your odds of contracting Ebola are somewhere between "very unlikely" and "zero," even if you went bowling in Brooklyn last week.

Your chance of contracting and dying from a different infectious disease, on the other hand, can be quite high. "Tuberculosis" and "AIDS" aren't trending on Twitter, but they probably should be.

That's the big lesson of these maps, which use data from the World Health Organization to show you the deadliest infectious diseases around the world.

A Note on the Data: The WHO only collects global mortality statistics for the following diseases and disease types:

- Other sexually transmitted diseases (which includes syphilis, chlamydia, gonorrhea, trichomoniasis, and other STDs)

- Hepatitis (which includes acute hepatitis B and C)

The numbers in the black boxes show you how many thousands of people have died from the dominant infectious disease in the country. Keep in mind that these are absolute numbers, so they're not scaled to account for a country's population. (You can find population numbers here.) They also don't convey the total number of deaths from all infectious diseases in each country, just the number of deaths from the deadliest disease. You'll also notice that many countries in the maps are grayed out. That indicates the country's deadliest infectious disease wasn't among the ones monitored by the WHO.