How I left the purity movement

The church taught us it was a man's duty to lead us down a righteous path. But again and again, I strayed 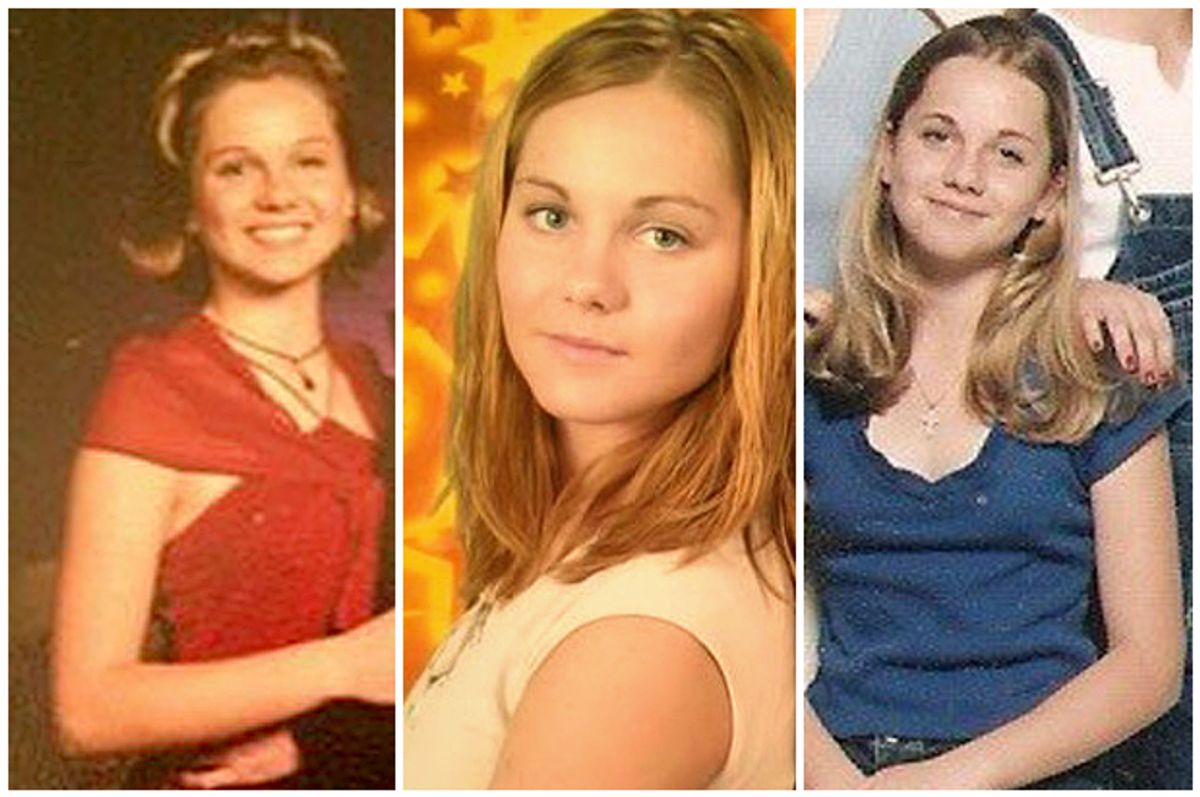 Photos of the author in high school
--

“This is so we can stay pure and abstain from sexual sin,” he said as he awkwardly placed the purity ring onto my finger, and another one onto his. The ring’s engraving read, “True Love Waits.” I was 16. He was nearly 19. We were both virgins struggling to stay pure in an evangelical Christian community.

She referred to a verse in the Bible:

“Young women of Jerusalem, promise me by the power of deer and gazelles never to awaken love before it is ready.”  — Song of Solomon 2:7, Contemporary English Version (CEV).

However, I later found out the Complete Jewish Bible (CJB) version read: “I warn you, daughters of Yerushalayim, by the gazelles and deer in the wilds, not to awaken or stir up love until it wants to arise!”

My love and desire definitely wanted to arise. To awaken. To be discovered. I was a compulsive masturbator during my early to late teens. I asked for God’s forgiveness after every session. After a while I negotiated with God – at least I wasn’t having premarital sex. That would definitely be worse.

Christian Pentecostal girls dated what the charismatic church called “Men of God.” In retrospect, they were more like “Purity Boys.” That’s how I refer to them now. My first Purity Boy gave me a purity ring to represent our sexual abstinence and virginity pledges to God. I thought it romantic, although I had to admit he had just increased the pressure and sexual tension with this seemingly chivalrous gesture.

I spun the purity ring round and around my finger during class, allowing unwarranted sexual thoughts. His hand on my thigh. His lips softly grazing mine as he dropped me off at home after Wednesday night church service. His long, velvety finger circling my chin, while gazing shamelessly into my eyes.

Purity Boy No. 1 expressed similar sexual desires, which he referred to as “lusts of the body.”

“It sounds so dirty, so impure,” I said.

My thoughts, although technically sinful, were also romantic, sweet. Not impure. But I doubted my reasoning; it contradicted my religious beliefs, which translated to doubting my very foundation.

But I needed to talk to someone about my own struggles. I turned to my boyfriend, presumably “A Man of God,” about it. I figured: Why would the church look down upon a relationship of openness? But these conversations were off-limits.

“If we talk about our sexual struggles with one another, we open the door for Satan’s temptations,” he said.

I didn’t listen. Talking about it was foreplay. The more we discussed what we grappled with, the more I wanted him inside of me. The sexual thoughts and romantic musings only increased. One day I asked him if he shared my desires. If the thoughts and reveries were becoming unbearable for him as well. He agreed that they were. I could tell he was getting less stubborn, more willing.

Still wearing our purity rings, we had sex months later. He had to share his sexual sins with his accountability group, which made me feel uncomfortable. “It has to be done,” he said in a melancholic way.

Once we started having sex, we couldn’t stop. Sexual purity conferences and retreats through the church didn’t help. It only stalled our activity.

“Satan has a foothold on our lives,” he would say.

He encouraged me to continue asking for God’s strength and forgiveness. I wept about our sexual sins often. I thought this form of emotional expression would somehow win me more points with God.

For two years or so, we lived in sin, as the church would call it, constantly asking for God’s grace and mercy on our souls. We felt like wretched believers, and oddly, the more we felt that way, the more we gave in to our desires. The desires were different, however. Once, my romantic and sexual fantasies seemed thrilling and somewhat innocent. Now, they were overshadowed by darkness — guilt, shame and blame.

“We have to get married,” he said, around the time I was preparing to leave for university.

It was too late. I knew it was over.

He married the next Christian girl after our relationship ended in sin.

At 18, I thought I had learned from my mistakes. This time around it would be different. I would find a Christian leader of some sort. That was the problem, I firmly believed – my last Purity Boy wasn’t strong enough. He wasn’t, as the church would label him, “A Man of God.” In college, I would find my true “Man of God.”

Purity Boy No. 2 was Christian perfect – handsome and a leader of a large Christian organization on campus. The first time I heard him speak at the organization, I knew he was my next potential husband.

In the evangelical faith, we only dated or practiced traditional courtship to find out if God wanted us to be together. He led a campus-wide marketing campaign that recruited students to the organization. I was wooed by his devoted leadership.

He had made a virginity pledge shortly after his first Christian relationship. That he would wait to have sex till marriage. Although he didn’t explicitly tell me what kind of sexual sins he had engaged in, he assured me that he had never had sexual intercourse. When I told him I had already engaged in sexual intercourse in my last relationship, he told me, “I’m sorry that guy wasn’t strong enough to lead you down God’s righteous path.” That’s what the church taught us: It was the man’s responsibility to lead women down a righteous path.

But all I could think about was getting into his pants. God, forgive me. He regularly spoke at and was heavily involved in the Christian organization, which made me jealous. It felt like he was sort of cheating on me with God. As if he loved God, or the organization, or the people he reached more than me. Silly girl, I thought.

“This is all for the Kingdom of God,” he said one day after I complained about not seeing him enough. “Our only purpose here is to win souls for Christ.”

I had believed that too. But surely there was a balance? I kept these thoughts to myself. I began hinting that I was struggling with sexual desires for him. Perhaps that would urge him to spend more time with me, helping me overcome my temptations. He would lead us in prayer, which only left me more aroused. The more we expressed our sexual struggles, the more we became vulnerable to one another’s immoral interests.

The first time he went down on me, I felt gloriously guilty. By then, I had realized: I was going to sin, I might as well enjoy it in the moment. Guilt began to integrate itself with my sexual pleasure. I later found out this was common among ex-Pentecostalists.

Once I orgasmed, he looked up at me with guilt-ridden eyes, his lips still glossy from my juices in the moonlight. “This, what we did here, doesn’t matter to me. It’s how I feel about you that matters.”

Why the fuck did he have to say that?

He decided we would both go on mission trips abroad and pray that God would reveal to us if we were meant to be together. He wanted to marry me and was tired of living in sin as a believer and Christian leader. He shared our sexual sins with his accountability partners, but apparently the accountability system didn’t really help.

Purity Boy No. 2 had another sexual issue: homosexual and heterosexual pornography. Yet this was one topic he rarely broached with his support network, as it would ruin his reputation.

“The mission trip and time apart this summer will lead us to the right answer,” he told me.

After his mission trip to Israel and mine to Romania, I didn’t want him anymore. During my mission, I had met Purity Boy No. 3 in his late 20s who completely refused any foreplay or kissing. Wow, he’s as pure as they come, I thought. He was waiting for his “princess” from God. He would reiterate to me that he would pray and see if I was his princess.

Purity Boy No. 2 felt like a fraud. No longer the “Man of God” I had believed him to be. He should have been stronger. After our mission trips, I called it off.

He married the next Christian girl after our relationship ended in sin.

Purity Boy No. 4 was a similar narrative. We courted for five months and then gave in to our sexual lusts. We sinned for nearly two years before ending it.

Guess who he married? That’s right. The next Christian girl he dated.

I was in college when I began my gradual transition out of the religious community. The severance took 10 years, and came as the result of more awareness: Of gender and sexuality, religion and inequality. I was uncomfortable with the narrative of women as “pure,” uncomfortable with the chivalrous sexism of evangelical heterosexual relationships, in which men were breadwinners while women ruled the domestic sphere. And after all the purity retreats, purity rings and mission trips, I knew very well: virginity pledges didn’t work. The guilt, blame and shame only scarred us.

I no longer date Christian men. I have been in an egalitarian relationship with my partner for nearly three years, one in which I don’t hold him responsible for our entire relationship. Ours is a partnership built on trust and deep respect for one another’s preferences and choices, and we strive to communicate our feelings and desires in an open and honest way. What I have now is far from perfect, but from a psychological and sexual perspective, I feel free.

Virginity pledges offered a rosy portrait of a future life. Congregants were assured by pastoral leaders that God would “bless the marriage bed” if they stayed true.

But recently I attended the American Sociological Association conference, where I spoke with doctoral candidate Sarah Diefendorf at University of Washington on her paper, “After the Wedding Night: Sexual Abstinence and Masculinities Over the Life Course,” examining evangelical men’s experiences taking virginity pledges, or pledging sexual abstinence till marriage.

By the end of the presentation, I was in tears. I knew that I could have been one of those wives.

I still have my first purity ring. I hold on to it as a reminder of the life I turned away from — and a commitment to the new life I chose.

Andreea Nica is a freelance writer, media strategist and budding scholar. She is writing her first book, Freeligious™, and has freelanced for Ms. Magazine, HuffPost, AlterNet, Sociologists for Women in Society, Feminism and Religion, among others. Andreea is currently pursuing her Ph.D. in sociology with research interests in gender inequality, religion and immigration.