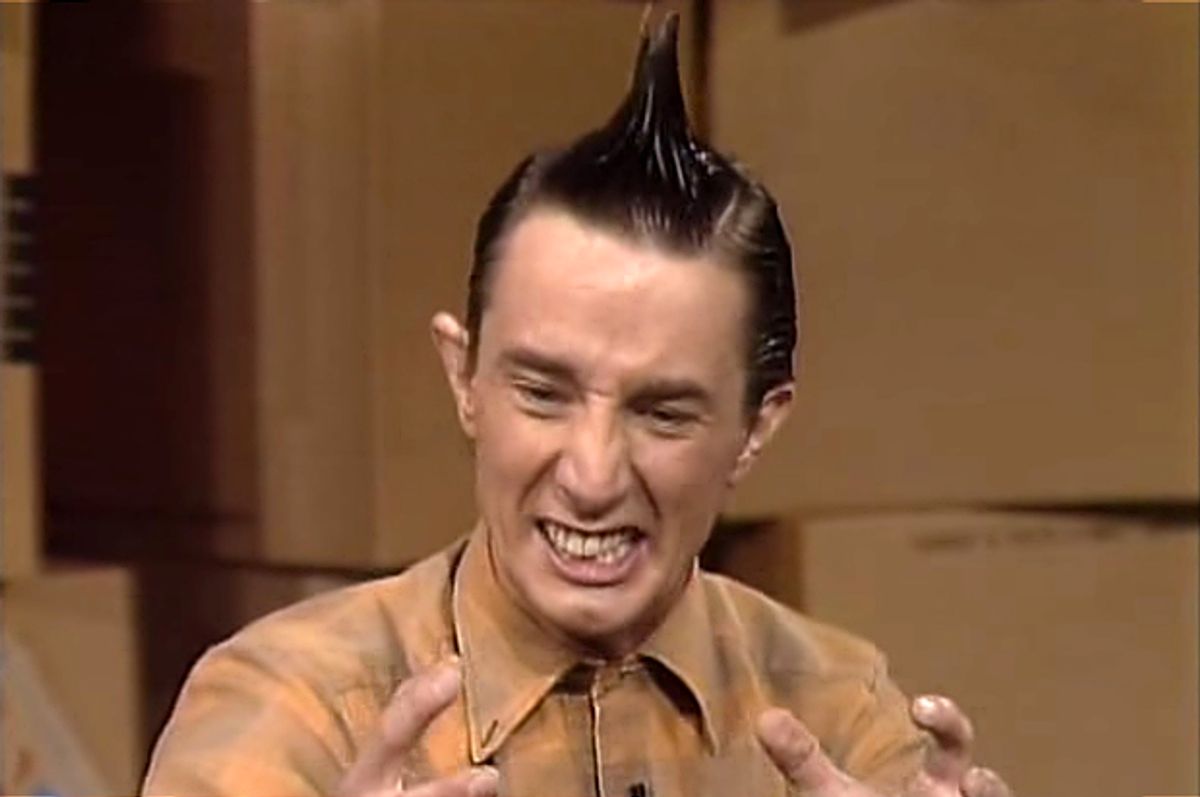 Excerpted from "I Must Say: My Life as a Humble Comedy Legend"

I wish I’d enjoyed Saturday Night Live more. I wish I hadn’t felt so perpetually under pressure when I worked there. But I think that’s just what the show does to some people. I certainly knew that I was at a pivotal moment in my career, and that if I made this SNL thing work, it would open doors for me that would have otherwise remained closed.

And don’t get me wrong—I really enjoy the show now. I’ve been back to host three times, I’m friendly with roughly 90 percent of everyone who’s ever worked there, and I’ve kissed Lorne Michaels on the mouth on national television. But my one season in the cast of SNL was a roller coaster of elation and anxiety. With thirty years’ perspective, I now recognize that I should have allowed myself to step back for a moment and simply exult in the privilege of doing that show.

I had trepidation about SNL from the moment I told Dick Ebersol that I was in. (As a reminder, Dick, not Lorne, was the executive producer of the show in 1984.) I’d had as perfect a life-work setup imaginable on SCTV, and whatever followed was going to have a hard time topping that experience. I put off the decision to join SNL for as long as possible, sitting outdoors in the sunny Palisades with a notepad, listing the pros and cons of doing the show.

The cons, to me, were many. One was essentially the same fear factor that had dissuaded me from auditioning for Second City Toronto in 1973: I didn’t like the idea of being funny on demand. While by 1984 I was a proven sketch performer, I had grown accustomed to SCTV’s gentle, if laborious, pace. After each take, we’d all crowd around the monitor and everyone would discuss how to recalibrate the scene for the next take: “Okay, maybe a little less from John, a little more from Andrea, and a lot less from Marty.”

But on Saturday Night Live, naturally, there would be no second takes, much less third, fourth, and fifth ones. And I’d heard many a horror story about its unrelenting pressure, and what it could do to one’s psyche. Plus, was it even a hip show anymore? SNL is such an unbreakable institution now that it’s hard to remember how tenuous its future was in 1984. Eddie Murphy had given the show a much-needed boost in the early 1980s, but now he was gone, and so was Joe Piscopo. NBC was giving serious consideration to just canceling the show outright. I remember being stunned, when I finally did arrive, that SNL, unlike the low-budget SCTV, had no wig department—they still just rented stuff on a season-to- season basis, as if they were never sure if there would be a next season.

Dick Ebersol deserves a lot of credit for his crazy gambit the season I joined: shell out a bunch of money to hire proven veterans, and let it be a somewhat different show—maybe a little more grown-up, a little more ready for primetime. It was due to the amazing people he had already recruited that I was swayed to say yes.

Billy Crystal, who had hosted the show twice the season  before, agreed to come aboard, along with Christopher Guest and Harry Shearer, who were red-hot from their mockumentary This Is Spinal Tap.

Like a lot of high-priced dream teams, this one didn’t always gel. There was also the separate issue of the people retained from the previous season—Julia Louis-Dreyfus, Mary Gross, Gary Kroeger, and Jim Belushi—who now had to take a backseat to the newcomers.

Billy I knew a little from our days as Witt/Thomas/Harris actors. I had immediately taken a liking to him—so smart, fast, and versatile. Harry I also knew a little, because we had a friend in common, Paul Shaffer. Chris Guest I didn’t know at all. But at our very first SNL read-through he struck me as a kindred spirit, both in his sense of humor and his own ambivalence about having enlisted. During Dick’s tenure, there was a little stage in the writers’ room where, if you were so inclined, you could get up with your script and act out a sketch idea rather than just table-read it. At the read-through for the first show, Jim Belushi and Gary Kroeger got up to act something out. Everyone, me included, pivoted their chairs toward the stage to watch them—everyone, that is, except Chris Guest, who sat stock-still, his back to the stage, the whole time Jim and Gary were doing their thing.

When I turned back around, I saw that Chris had written three flight options back to L.A. on the top of my script: United 274, American 117, American 133. Pure Chris.

Chris, Billy, and Harry were a formidable trio, three major comic talents in full bloom. I was simultaneously intimidated and stimulated by their collective presence.

Though the first live show of that season didn’t air until October, a bunch of us newcomers got together two months in advance to write and shoot some pieces. We were keen to make our influence felt, and we pushed for the show to embrace more elements of Spinal Tap and SCTV: from the former, a deadpan cinema verité feel, and from the latter, more pretaped bits and a heavier reliance on prosthetics and makeup. No more Chevy Chase playing Gerald Ford while looking and sounding nothing like Gerald Ford. If Harry Shearer was going to play Ronald Reagan, he would spend hours in a makeup chair to look not just a little, but exactly like Ronald Reagan—to visually match the accuracy of Harry’s verbal impersonation.

A bit later, as we were starting to prep for the live shows, I remember going into Harry’s office and saying, “You know what I want to do, Harry? I want to always hold back a piece that I’m writing, keep it in reserve—the kind of piece that you want your friends to respect. So that I can tinker with it, let it ferment.” Harry heard me out and then immediately took to his typewriter, typed out what I had just told him, and said, “Sign this, won’t you? I’m going to put it in my desk, so that when you come in every Tuesday evening without a fucking idea in your head, I’ll be able to ask you how that ‘fermenting’ piece you’re holding back for your friends is coming along.” Harry was all too prescient.

Excerpted from "I Must Say: My Life as a Humble Comedy Legend" by Martin Short. Published by HarperCollins. Copyright 2014 by Martin Short. Reprinted with permission of the publisher. All rights reserved.