My husband was abused as a choir boy: Why doesn't "Boychoir" tell his story?

A movie about the American Boychoir School leaves out its legacy of sex abuse, which is still haunting my marriage 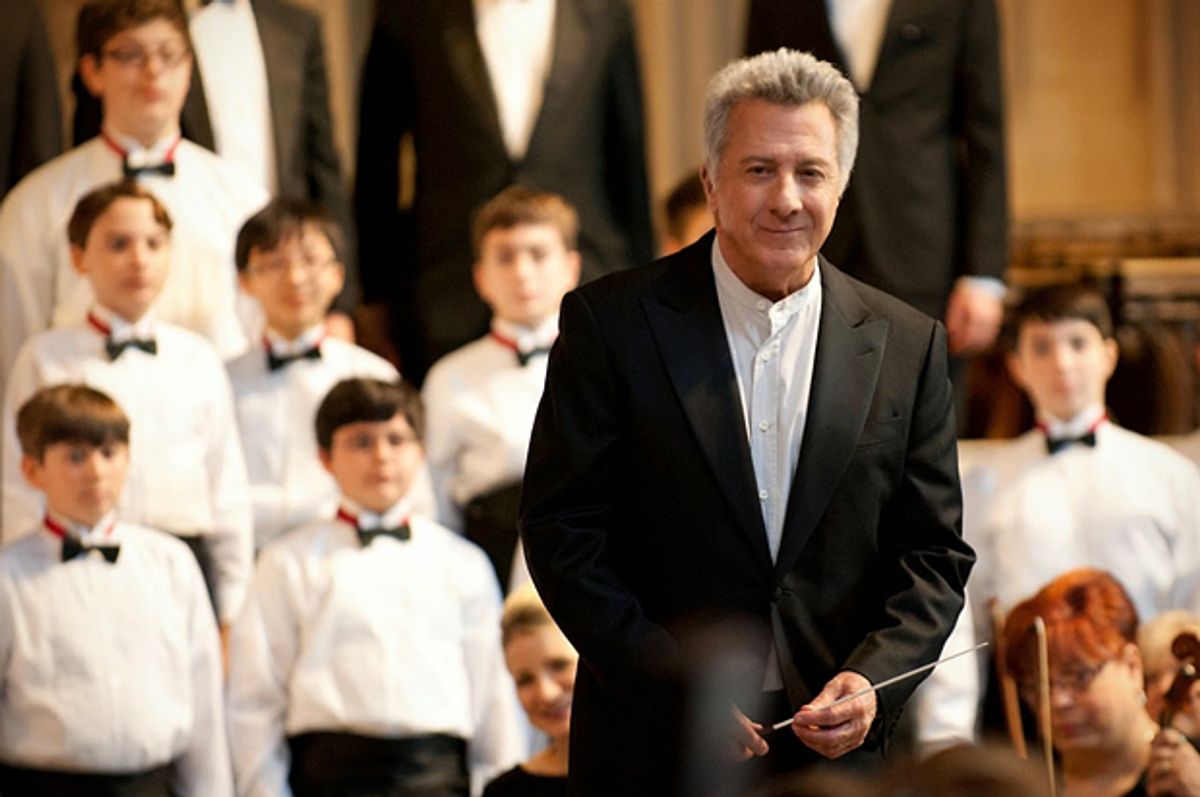 Last night, I thought my husband killed himself because of it.

Trav’s wallet, phone and wedding ring were lined up on the table. Our driveway was empty, and I smelled cigar smoke. “This is the day,” I reconciled. This is the day when the pain is finally too much. After years of therapy, diagnoses  and medications that mitigate — but can’t eliminate — the memories in his head, today is the day my husband will smoke a cigar (one of his remaining vices), drive to a remote location and then walk alone into the Maine woods.

“They made a movie?” he asked when he learned about "Boychoir." His voice got angrier. “What’s next? 'Penn State, the musical'?”

I had no answer.

"Boychoir" screenwriter Ben Ripley did not include a rape scene.

As late as the 1990s, the school also provided a well-documented spot where little boys were regularly and repeatedly sexually violated by teachers, administrators and other students. I’d wager the school is still addressing these allegations.

But it’s not a movie about overcoming a culture of institutionalized sex abuse. In fact, sex abuse has no part in the story line. Variety film critic Peter Debruge writes, “In a country where musical talent is so often confused with sex appeal, 'Boychoir' offers a welcome alternative, celebrating discipline, talent and the sound of untainted innocence.”

Untainted innocence? I’ll write it again for emphasis. Little boys, according to many sources, were systemically raped at the American Boychoir School.

“That” is all in the past — ancient history, the current American Boychoir School officials say, never using the word “rape.”

However, for Trav (and for so many sex abuse survivors), the American Boychoir School’s history dictates his present-tense reality.

There are safety measures now, the school’s website assures.

Trav’s parents were given safety assurances, too, and their son still spent 30 months as a choirboy from 1988 to '90 unable to sleep because of the sex abuse he saw, heard, feared and experienced.

More than 25 years later, he deals with the long-term effects of this experience. A few of the clinical diagnoses: post-traumatic stress disorder, depression, anxiety, bipolar disorder (1, not 2), and alcoholism.

Want to know how many prescription medications he takes?  Six. Two of those are anti-psychotics. For my husband, getting through the day is a win. Sleep is a gold medal.

On one especially brutal night, Trav said, “I cannot get away from this. I keep trying to put it behind me, and it keeps presenting itself. Every time I try to get past this, it jumps in front of me.”

Frustrated, he asked, “When does it end, and what do I have to do to make it stop?”

I had no answer, knowing that he will soon see "Boychoir"  lit in capital letters every time he drives past the local theater.

“They are really making a major motion picture about how great the school is?”

At best, "Boychoir" is extraordinarily insensitive and in poor taste. At its worst, some other wife will also wonder if that movie might be the push that drives her husband to kill himself.

As I walked from room to room in our home, opening every closed door, I remembered Kodak’s iconic television advertisement with the choral arrangement of “True Colours” that promoted the 1988 Olympic Games. Although he did not sing the solo, nuances of Trav’s voice resonate throughout the song.

As the song played in my mind, I wondered if any of the people involved in the production of "Boychoir" understand psychological triggers. Triggers can move a period of hopeful productivity and peace into a literal nightmare.

Or, rather, night terrors. That’s also on my husband’s diagnosis list.

Despite the social stigma of diagnosis and medication, Trav is one of the lucky ones. He’s dealing with the experience. Overwhelmed by shame and lacking resources, many male survivors do not.

My husband makes music professionally and performs five shows a week. He’s built a solid business on his terms, one small stage at a time, where he has the luxury of coming home every night.

Except he wasn’t home last night.

“I can't ever get away from this,” he said the last time I saw him.

Much of the American Boychoir School’s history is public knowledge. Most notable is the years-long court case where the American Boychoir School’s initial position was that it should not be held accountable for the decades of sex crimes committed by its boarding school employees. When that logic was unsuccessful, its position shifted to one of consent. The school actually argued that 12-year-old boys were old enough to consent to sex with their guardians.

The school lost the legal battle, the director moved to Canada, but the abuse did not stop.

So, my husband’s question is legitimate. Why would a “feel-good family film” be made about the American Boychoir School?

I imagine that for many boys, the American Boychoir School experience was a positive one.  I do not want to negate the accomplishment.  I’m certain many students had a terrific experience with Penn State’s athletic program, too.

What I am asking for is a heightened awareness and some degree of sensitivity. If you purchase a ticket for "Boychoir," imagine boys from that choral line shivering under blankets in a dormitory. Imagine one of those "Boychoir" trustees taking them on a weekend camping trip. Now imagine them as grown men. Then imagine that man’s wife — elated to hear not the beauty of his choral singing voice in a national commercial, but the ordinary sound of his car in the driveway and his key in the kitchen door.

Shonna Milliken Humphrey is the author of "Show Me Good Land" (Down East Books, 2011).