Chris Matthews and Ed Rendell, working-class heroes -- in their dreams 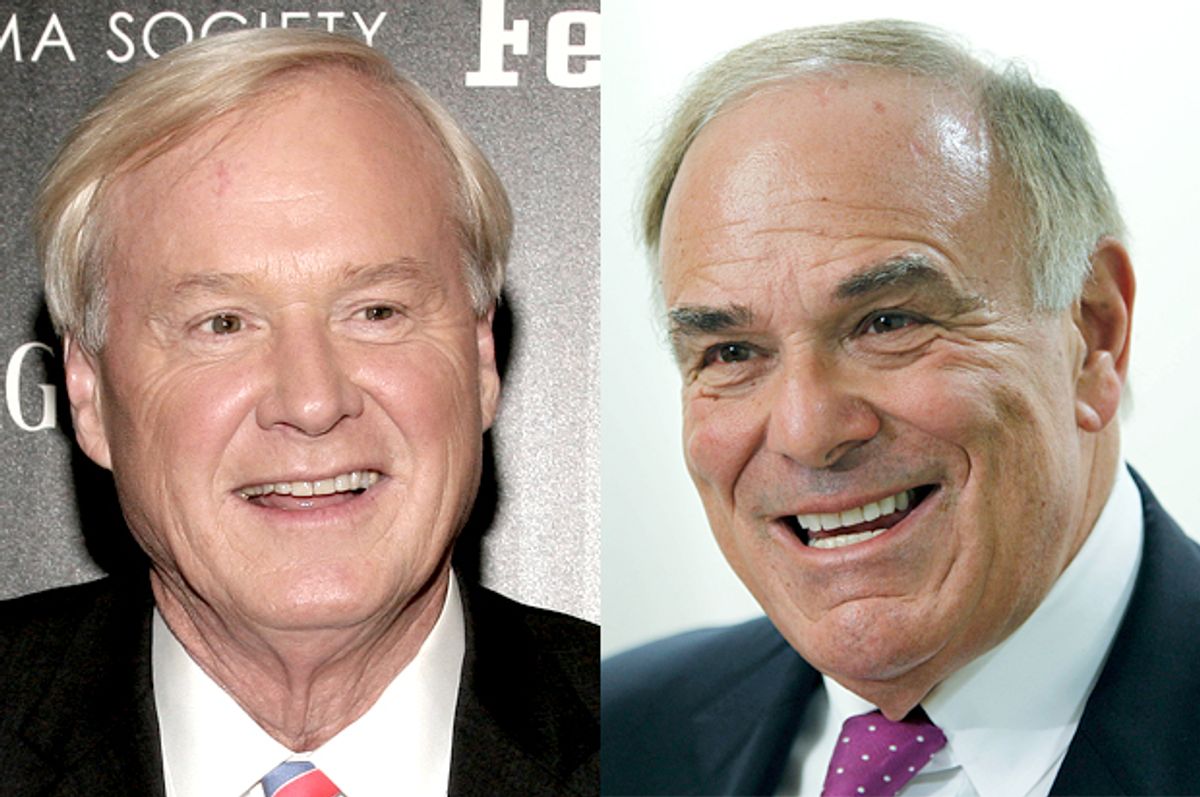 Is there anything more fascinating that listening in on a conversation between a couple of middle-aged white millionaires (is there any other kind?) telling each other how wonderful they are?  I didn't think so, which is why I wanted to draw your attention to this scintillating back and forth in Philadelphia Magazine between a couple of men who like to think of themselves as just two regular guys, ex-Gov. Ed Rendell and MSNBC's Chris Matthews.

They first knew each other when Matthews was working for Jimmy Carter and Rendell was backing Teddy Kennedy back in 1980:

CHRIS: Teddy came to town, and he was eating Philly pretzels and meeting with the Cardinal. You could do that in those days. And Carter was in his Rose Garden because of the [Iranian] hostages. And I’m handling Philly. These guys rolled us over.

ED: But we only won by 7,000 votes statewide. It was almost a Pyrrhic victory. Because by the time [the nomination battle] reached New York and Pennsylvania, it was over.

Good times. These two guys adore one another. Which is nice. Except for their politics.

ED: I think you’re gonna have a divided government no matter who wins in ’16. But I would say there are two people in the field who have the ability to maybe bring the Congress together: Hillary on the Democratic side, and Jeb Bush on the Republican side. Part of it, Chris, is just the interpersonal skills. I had a Republican legislature for six of the eight years [I was governor], and yet everything I talked about in the 2002 campaign, we made significant progress on. Because I knew how to sit down and horse-trade.

Villagers and cynics love to mock liberals for "Green lantern-ism" --- the notion that the president has more power than he actually does --- but the truth is that this centrist twaddle qualifies just as easily. Oddly, Rendell and company rarely get criticized for insisting that the president could have just gotten everyone in a room and knocked some heads together to solve everything once and for all. It's fair to say that this myth is just as pervasive as the so-called silly liberals' and it's believed in much more powerful circles than the comment section of Daily Kos.

Rendell gives the president only a C-plus, unfortunately, because, well, you know why:

ED: When I say C-plus, he came in with tremendous wind at his back, and he had the opportunity to do great things. He’s failed to do the politics, small p, necessary to do the great things. Interestingly, I think he has a chance to change that legacy — ISIS has given him that. He did a brilliant job putting that coalition together. You’ve got Arab jet-fighter pilots dropping bombs on other Muslims. That’s a huge achievement. I think if he pivots off this, if after the election he gets immigration reform done, maybe cleans up a few things in the Affordable Care Act, and maybe his last year does the bargain on the debt — if he does all that, then he gets the A-minus.

It's nice that Rendell thinks ISIS is an "opportunity" for the president to change his legacy and that it's "brilliant" that Arabs are dropping bombs on other Muslims but I'm afraid that's just a little bit too darkly cynical for normal people. One assumes Rendell will be very impressed by this from his favorite potential GOP candidate, Jeb Bush, who gave the president an F-minus:

Bush compared keeping forces in Iraq to the post-World War II missions involving U.S. troops in Japan, Korea, and Europe, which "created a security for the world and allowed people to rise up from poverty." According to Bush, those missions "should be something that we are really proud of," and not doing something similar in Iraq "created a void that has allowed ISIS to emerge in Iraq as a force to be reckoned with. And not fulfilling the commitment of the red-line threat created a similar kind of situation in Syria."

According to Bush, "there is a consistent foreign policy for our country that has worked" since World War II under Democrats and Republicans alike, "and it starts with saying that we lead the world. We're not part of the 'community of nations,'" a term Bush said gave him nausea.

What could be more sickening than the idea of a "community of nations"? That's right up there with "world peace" and "global cooperation" for sheer stomach-churning revulsion. (And I wonder if he asked his big brother why he signed that pesky status of forces agreement to withdraw from Iraq? Seems odd.)

But back to Jeb's biggest fan, Ed Rendell. It's the last part of his comment that's so revealing. After all the sturm und drang of the budget deals of the last few years and the unfortunate results, you'd think the deficit scolds would give it a rest, if only for a little while. But no, there's Rendell still pushing the daft idea of a Grand Bargain to cut Social Security and veterans programs. One might wonder why they are so wedded to this concept even today, when it's quite clear that neither party nor the population at large is interested in kicking the legs out from under the incomes of seniors, veterans and the disabled at the moment. But perhaps that's because that old Upton Sinclair saying about how "it's difficult to get a man to understand something, when his salary depends upon his not understanding it" applies in this case.

Rendell is the co-chairman of "Fix the Debt," a boondoggle designed for the purpose of pushing through this Grand Bargain, which basically cuts Social Security in order to pay for tax cuts for billionaires. Some bargain. And it's odd that Philadelphia Magazine didn't mention this in that charming conversation with Chris Matthews because they published this scathing indictment of Rendell's involvement in the group just two years ago:

In addition to his current duties as professional-liberal-even-Joe-Sixpack-can-love on MSNBC, Ballard Spahr court jester, and corporate consigliere at Greenhill &amp; Co investment bank, Rendell is currently co-chairing the steering committee of something called The CEO Campaign to Fix the Debt—a blue-chip cabal of 130-plus plutocrats who have anted up a $43 million kitty to fund a multimedia stealth campaign/public relations offensive to convince the turkeys to vote for Thanksgiving.

Fix the Debt is pushing for radical alterations to the tax code to legalize a hundred-plus billion dollar corporate tax dodge and pass the buck onto the middle/working/underclass in the form of deep cuts to Social Security, Medicaid and Medicare, all the while masquerading as a selfless crusade to save the nation from going over the [cue thunder and lightning] financial cliff. Bless their blackened hearts.

One of the Fix the Debt campaign’s main proposals for deficit reduction is creating a “territorial tax system” that would enable corporations to evade taxation on offshore earnings—which amounts to a combined $418 billion from the Fix the Debt member corporations—when they bring that money home, and giving themselves a $134 billion tax break, according to a new report from the Institute for Policy Studies titled “The CEO Campaign to ‘Fix’ the Debt: A Trojan Horse for Massive Corporate Tax Breaks.”

It never fails to amaze that Rendell's affiliation with that group isn't always mentioned when he pontificates about "debt" and "entitlements." And one wonders when Rendell and company are going to be held responsible for what they've wrought. In case anyone ever had any doubts, the Republicans have been making sure that any Democrat who voiced support for that Grand Bargain nonsense is paying for it now. Here's an example of the ads they've been running:

Why in the world would the Democrats want to grab that hot potato again, especially since it's a stupid idea in the first place? But stranger things have happened. If the Grand Bargain returns in the new Congress you can bet that Ed Rendell and Fix the Debt will be pushing it with everything they have.

ED: ... I don’t think Jeb is going to run, and I don’t know that Jeb would do all that well in the Republican primaries. I actually think if Romney runs again and says I told you so —

CHRIS: And he’s not a bad guy. He’s a gentleman. He’s old money. [In 2012] he’s in Iowa, he’s going around signing posters, having fun. And I walk up to him and I say, “Can you say ‘Let them eat cake’ in French?” And he mumbles to me, off-camera, “I can, but I won’t.” [laughter] There’s so much he’s hiding about his class and his money. He’s so much smarter than how he comes across, because he’s hiding who he is.

ED: He also hid his real political views. He should have run on RomneyCare. When I became governor, we sat with Governor Romney to learn the ins and outs of RomneyCare. He was as proud of that — like it was his grandson. And then he ran away from it in the campaign.

PM: Do voters smell someone who’s not authentic?

Chris Matthews, the regular guy from Philly who reportedly makes $5 million per year, and Ed Rendell, the CEO-pimping investment banker who's just sitting on a million dollars in unused campaign funds, should know all about that.