He thinks abortion is "worse than Hitler," and hates gays, women and Muslims. Here's what's headed to Congress 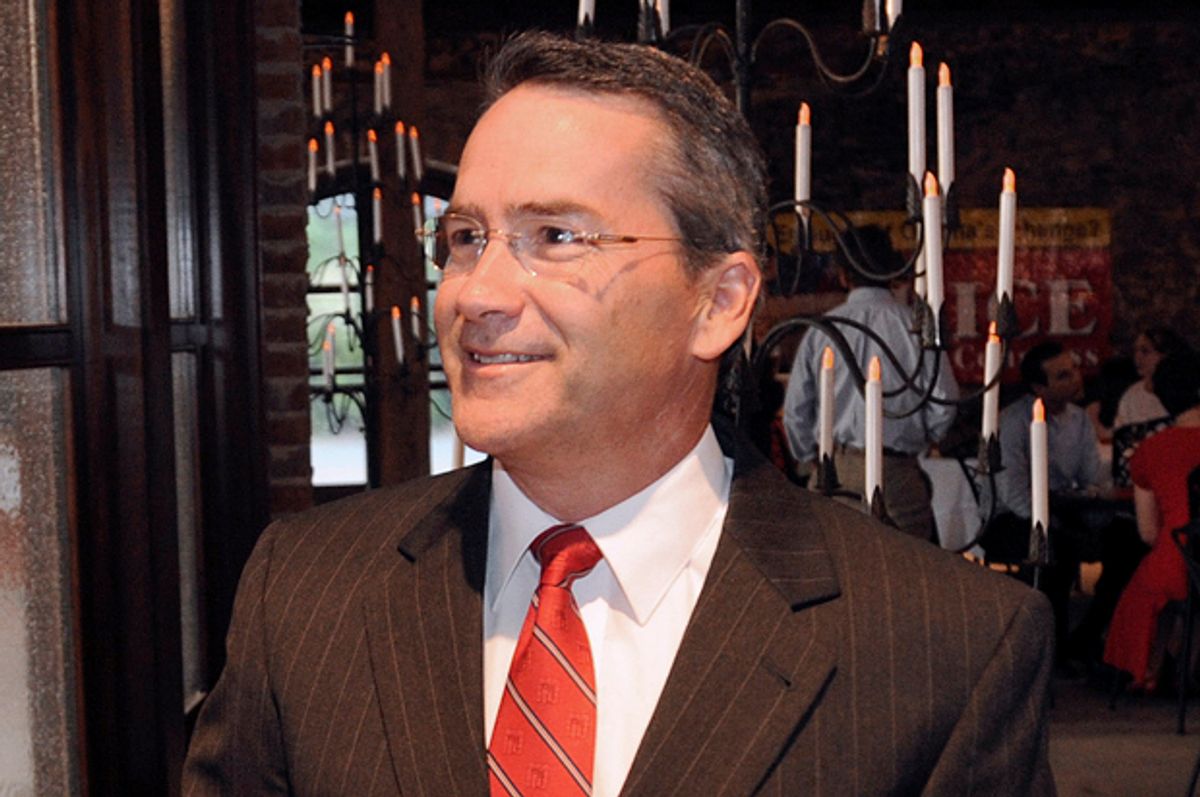 It’s official: in January, Jody Hice will be sworn in as the next Congressman from Georgia’s 10th District. This is a man who has called Islam, the second-largest religion in the world, “a totalitarian way of life with a religious component” that “does not deserve First Amendment protection.” In his book he calls legal abortion “worse than Hitler's six million Jews or Mussolini's three hundred thousand,” adding that “the genocide in America is inexcusable!” In 2004, he told the Athens Banner-Herald that he doesn’t “see a problem” with women running for office “if the woman’s within the authority of her husband.” On his radio show he blamed Sandy Hook and other school shootings on “kicking God out of the schools, and... kicking God out of the public square.” He once misquoted a satirical essay by a gay writer as evidence that homosexuals preying on children was  “part of the ‘gay manifesto’” and part of the “radical agenda that is currently threatening our nation.”

As Matthew Pulver of the Flagpole writes, Jody Hice believes a lot of things that make him sound insane. Last night, he won a seat in Congress.

A Baptist minister and former talk radio host, Hice is filling the hole left after Paul Broun’s failed run for Senate. You might remember Paul Broun as the Congressman and medical doctor who stood in a room festooned with deer heads and told a gathering of Baptists and hunters that evolution, embryology and the Big Bang were “lies straight from the pit of Hell.” Broun set an incredibly high bar for mindboggling insanity, but Hice just might be able to clear it.

Sadly this isn’t even a surprise. It’s been clear that Hice was headed to Washington after beating businessman Mike Collins in the Republican primary run-off on July 22. Georgia is a brutally gerrymandered state, and as the 10th is currently drawn, winning the GOP primary basically guaranteed Hice the seat after a perfunctory general election. He ran against Democratic candidate Ken Dious, a lawyer from Athens, whose campaign’s most visible reminder after the election will most likely be the leftover campaign t-shirts clogging Dious’s attic like the unsold CDs and seven-inches found in the homes of so many Athens bands.

Even for Georgia natives familiar with the regressive conservatism found throughout much of the state, Hice’s rise and Broun’s longevity are confusing because their district contains one of Georgia’s more reliably liberal towns. The 10th encompasses Dious’s home of Athens, a university town that houses one of the state’s more notable liberal enclaves. Athens is overruled by its considerably more conservative neighbors in the 10th, which, for most of Broun’s tenure, stretched from the northern suburbs of Augusta up through a swath of rural communities along the state’s northeastern border with South Carolina. The district was rewritten again in 2013, but it’s still a deep red block with a small jot of purple called Athens.

Being represented by Broun was a source of extreme embarrassment for many in Athens, and that won’t change with Hice taking his seat. Athens used to be represented by moderate Democrat John Barrow until a Republican majority in both Georgia houses lead to mid-decade redistricting in 2005. Barrow was cut out of Athens and has grown increasingly conservative while pulling off a surprising series of reelection victories. The Blue Dog Democrat was the only white Democratic Congressman in the Deep South before he lost his own seat this week.

Like Paul Broun before him, Jody Hice has partisan redistricting to thank for his victory. Those same factors will keep him tied to the 10th, though, along with his own extremism. Despite making a national name for himself and becoming a tea party darling, Broun finished fifth in the GOP Senate primary in 2014. A conservative hero while ensconced safely in his own district, Broun crashed and burned in his first statewide election. He couldn’t run for both the Senate and the House, creating a void that Hice quickly filled with his own tactlessness and demagoguery. It’s tough to see Hice succeeding on a statewide level after both Broun’s crushing defeat and tea partier Jack Kingston’s Senate run-off loss to Romney-light millionaire businessman and political neophyte David Perdue.

Jody Hice will still find plenty of ways to embarrass himself and damage Georgia and America from his House seat. From his hatred of gays and Muslims to his goal of breaking down the separation of church and state, Hice is an extremist who will drag his state and country deeper into disrepute. Athens and any Georgian left of Newt Gingrich have had a hard time swallowing the last seven years of Paul Broun; with Jody Hice we’re in store for more of the same.