There’s plenty of blame to go around, but Democrats should avoid a circular firing squad. Here's the road forward 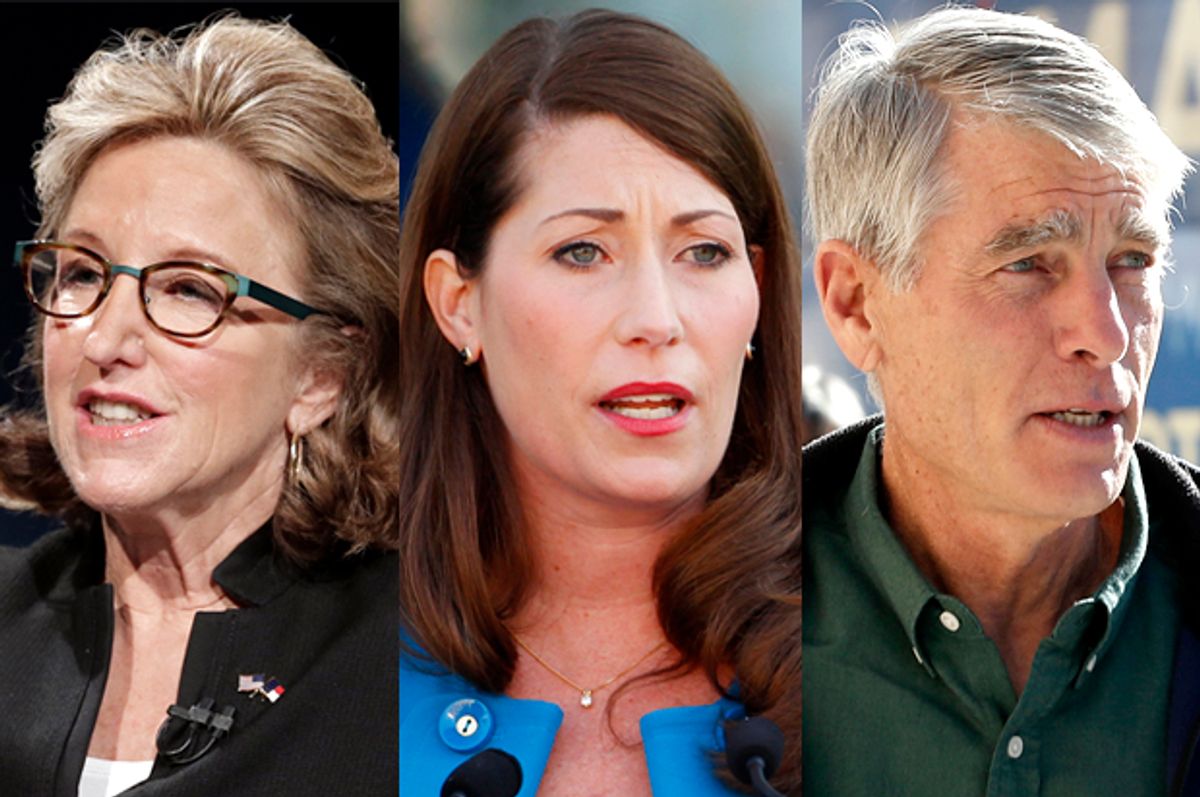 Final results won’t be in for a while, but it looks like Democrats have lost enough Senate seats that outstanding races can’t help: Republicans will take control in 2015.

For a long time it’s seemed that Republicans were the ones with a demographic problem: Their 90 percent white party will be extinct as a national force within decades, in a country that will soon be mostly non-white, unless they diversify their appeal. But now it’s clear that Democrats have their own demographic challenges: managing to reassemble their successful multiracial coalition without fracture, conflict and playing one group against another.

The Democrats’ need to rely on white voters, especially in the South, led to some tough choices for party leaders over the last few months. One big one was President Obama’s decision to delay action on deferring deportation of millions here illegally until after the election, because of the way the issue could hurt red-state Dems like Kentucky’s Alison Lundergan Grimes, Arkansas’ Mark Pryor and North Carolina’s Kay Hagan.

Now Grimes and Pryor have been defeated anyway, while the one Democrat who might have been buoyed by the decision among his state’s Latino voters, Colorado Sen. Mark Udall, has lost too. While it’s too soon to say a larger or more enthusiastic Latino vote would have put Udall over the top, the decision is an example of how 2014 saw fractured Democrats pitted against one another.

The other major challenge in the race was Obama’s unpopularity with red state Democrats, who faced most of the tough races. Grimes repeatedly stumbled over how to deal with the fact that Obama is the head of her party, while North Carolina’s Kay Hagan was more deft.  To be honest, while Hagan was leading for much of the night, I’d cast this as a tale of two Dems and how they handled the Obama challenge. There’s no longer that happy contrast, but it’s still worth looking at whether the difference in the two women’s approach to Obama could have made any difference in the two outcomes. Grimes was creamed; Hagan lost in a heartbreaker.

Certainly Grimes struggled throughout the campaign to avoid association with Obama, while Hagan was more creative in dealing with the problem of Obama-hate among her state’s white voters. The North Carolina incumbent wasn’t always a profile in courage, either. Although Obama cut a last-minute ad for her to run on black radio stations, Hagan wouldn’t comment on it. Still, the Thom Tillis campaign jumped on the issue, trying to smear Hagan with the president who leads her party, anyway. Maybe it worked.

But Hagan did much better dealing with questions about the Affordable Care Act, derided as Obamacare. She put Tillis on the defensive for his role in blocking Medicaid expansion early, so that Tillis went from bragging he’d single-handedly blocked Medicaid to saying he was open to some kind of expansion.

In a debate with Tillis, when he attacked her for voting for the bill, she proudly defended her decision, pointing out that her state has the fifth-highest number of ACA enrollees in the United States. That, she said, “shows the need for affordable health care in our state.” She campaigned on expanding Medicaid.

By contrast, Grimes got a rocky start and evaded questions about either the ACA or Kentucky’s successful version, Kynect, until late spring. As late as May, she repeatedly refused to say whether she’d have voted for the bill if she’d been in the Senate in 2010.

The next day, she tweaked her answer slightly to the Huffington Post. "If I had been in the Senate, it would have been a different law," she said. "As Kentucky's next senator, I will vote to fix it -- which is more than Mitch McConnell would do. I've said all along that the law isn't perfect and there are parts that need to be fixed."

But Democrats harping on the need to "fix" what has in most respects been a very effective law is just another example of their inability to message what the party’s done right – on the economy or healthcare reform.

Then came Grimes’ repeated refusal to say whether she had voted for Obama in 2008 or 2012. It was bewildering. Her campaign first pitched it as a smart move – they’d denied the McConnell campaign a sound bite linking her to Obama. But they got a different sound bite: Grimes sounding evasive and uneasy and unready for leadership. South Carolina Rep. James Clyburn told MSNBC Tuesday he thinks it cost her the election. “I don’t think her [polling] numbers started to plummet until after she botched that question so significantly,” Clyburn said.

Clyburn probably overstates the impact of the move. It had been a tight race all summer, though Grimes did have a slight lead in the Courier Journal poll a week before her non-answer; other polls had her a point or two behind McConnell. Then the bottom started falling out of her campaign. It’s impossible to posit cause and effect; McConnell put $2 million of his own money into the race in the closing weeks. But it’s safe to say her evasive Obama answer didn’t help her; we just can’t know how much it hurt.

Grimes’ dilemma underscored the demographic challenges that remain for the Democratic Party, as it struggles to be a multiracial party and court voters of every race. In Kentucky, Grimes didn’t have a path to victory without improving on Obama’s numbers with white voters. Her evasions may have depressed turnout among blacks and liberals, but it was not likely to be enough to win anyway. Hagan handled the issue much better, but still couldn’t get over the finish line.

There’s another game of finger-pointing going on, and it involves the prevalence of women’s issues in the 2014 race. The women’s vote saved Obama and Democrats in 2012, but while there was a gender gap this year too, it doesn’t seem to have been as wide. (I confess I haven’t exhaustively studied exit polls and other data.)

Mark Udall, in particular, is getting criticized for running a campaign too heavy on issues of reproductive rights, since slick Cory Gardner was able to flip-flop on his support for personhood legislation and apparently fool voters with his pledge to make birth control pills available over the counter “round the clock,” like Viagra or condoms, which they are actually nothing like. Last week Udall was heckled by donor Leo Beserra, a Wall Street Democratic backer. Other anonymous critics derided Udall as Mark Uterus. Stay classy, Colorado Dems.

It would be ridiculous to see women scapegoated for not performing magic this time around. Democrats chased white male and particularly Southern voters, trying to build a national coalition for decades, to no avail. Women alone couldn’t resist a GOP tide, and their issues shouldn’t be thrown overboard now. That makes no sense, and sensible Democrats won’t let it happen, but you’ll hear nasty carping in the weeks to come.

Time and demography are still on the Democrats’ side, but this election showed the difficulty of holding together the Obama coalition without Barack Obama. We’ll be galloping off to 2016 coverage shortly, but the lessons of this defeat need to be absorbed.