Meet the weirdest show on television: Why you need to watch "Fake Off"

It's an odd, nearly indescribable competition show that ultimately makes the case for the cultural dominance of TV 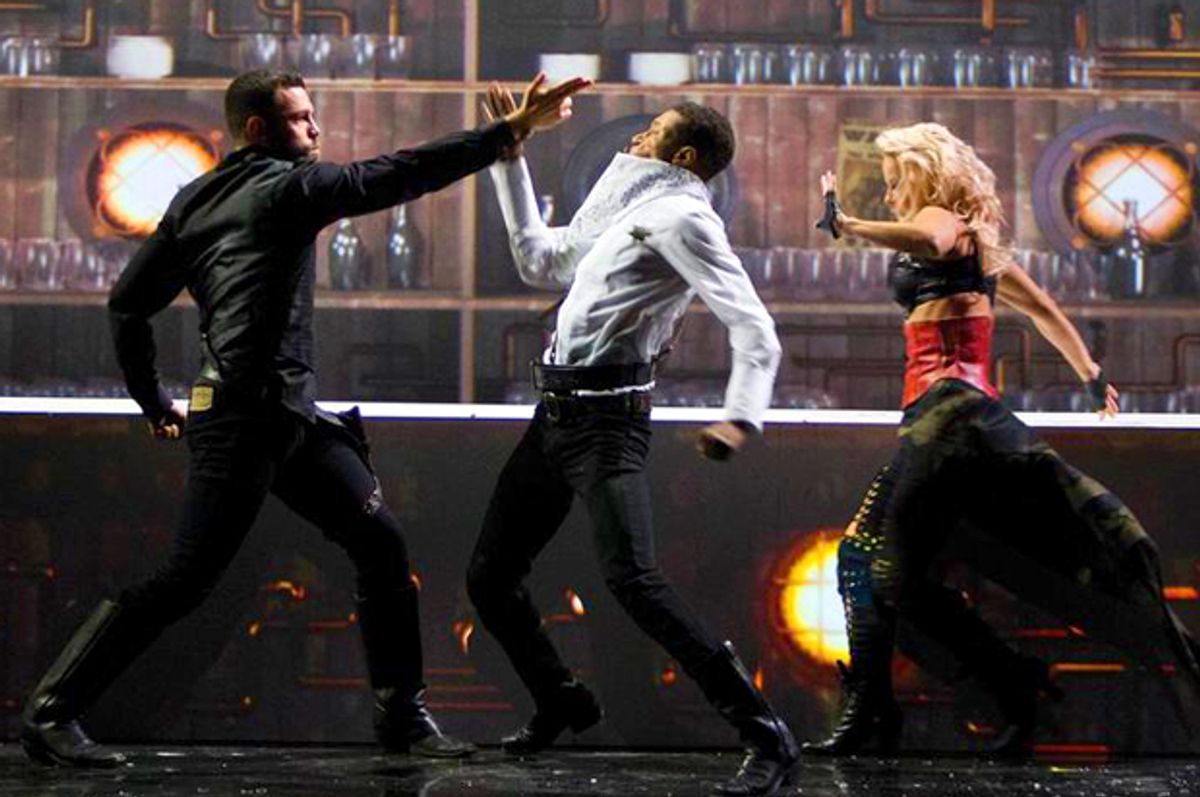 The word “fake” quickly loses its meaning in TruTV’s “Fake Off,” a reality competition show about a performance art termed, for some reason, “faking.” Being a “faker,” therefore, is a good thing, regardless of what Buster Bluth’s faithful nurse might think. One of the judges, Michael Curry, enthusiastically tells a team of contestants: “You did more fakes per second than anything I’ve ever seen.” Another — Chilli, formerly of the R&B group TLC — exclaims: “We’re being faked out for real!”

For that doublespeak alone, “Fake Off” is one of the more unique shows on television, a reality competition show about an art form no one’s ever heard of, where the boundary between authenticity and inauthenticity is casually blurred and then tossed aside on a regular basis. But it’s also on a network that no one’s ever heard of — TruTV, which used to be CourtTV, an equally forgettable Turner network that probably got bundled into your cable package. TruTV is now a home for bizarre little reality shows that are too weird for Bravo and not weird enough for TLC: ventures like “Container Wars,” Storage Hunters” and “Hardcore Pawn.”

“Fake Off” is a new offering from the network, and unlike the workplace-reality shows that characterized both TruTV and CourtTV, it’s offering something very different. Instead of the travails and triumphs of a day working a shipping route, or a pawn shop, or an unruly, theatrical “courtroom,” where the details of real life are massaged into drama, “Fake Off” is invested in creating spectacle out of fiction. What it calls “fakes” are really illusions, or stunts, or set pieces. And though it has, as far as I can tell, egregiously invented a term that sounds hip and organic and forced all of the participants on the show to use it, “Fake Off” is an oddly intriguing and charming little piece of pop culture that is entirely about pop culture.

According to TruTV’s “Fake Off” website, “the art of faking combines dance, acrobatics, puppetry, technology and talent.” But what that definition fails to include is the inherently derivative nature of the “fakes”: Every performance in the show’s first three episodes is built off of an existing cultural referent, whether that’s “video games” or “reality television” or “the Titanic.” They’re fake “fakes,” of a sort: fan fiction “fakes,” maybe. Each troupe — the show starts with 10 — gets a different theme, and then performs on a glitzy stage. They’re scored by the three judges — Chilli, Harry Shum Jr., best known from “Glee,” and Curry, the choreographer behind the Sochi Olympics opening ceremonies.

And that’s the best way to describe the performances on “Fake Off”; they’re little mini-sketches of the type seen at the Olympics, where the artistry serves a definite purpose: Here is Russia’s pride; here is a vision of global community; here is an interpretation of “Breaking Bad,” as delivered by the blacklight-savvy group ArcheDream. The only thing off the table is voiced work — the sound is piped in. Otherwise, everything is fair game: Digital projections drift over the floor and multiple onstage screens; the music includes stingers and onomatopoeia; and the performers wheel in furniture and other props as they see fit. The skills demonstrated have the familiarity of Olympic events, too; it’s pretty easy to forget about speed skating for the four years between Olympics, and it’s just as easy to forget about trapeze artists. They don’t forget, of course. But audiences do.

My introduction to “Fake Off” came from Flavorwire’s TV editor Pilot Viruet, who wrote up TruTV’s new shows in an effort to understand what the network was trying to sell viewers. (She did not find answers.) But she did like “Fake Off”: “It is, above all, intimidatingly impressive. I still don’t know what Faking is, but I think ‘Fake Off’ is my new favorite unscripted program.”

I have to agree with her that “Fake Off” is unexpectedly mesmerizing — and each episode moves quickly through the behind-the-scenes stories so that as much airtime as possible is focused on the performances. But the show is also bad, structurally speaking: It’s produced sloppily, and the emotional arcs for each team aren’t well-established through editing. For example, on higher-caliber reality shows like “So You Think You Can Dance” or “Top Chef,” the viewer is never left in any doubt for why a team is eliminated. In “Fake Off” the criteria, like the art form, are muddled, and it makes for frustrating viewing in what is essentially a modified game show.

What carries the show are these performances, so unlike anything else on television. The whimsy of the troupe’s approaches — silhouettes, puppets, dinosaurs made from glow-in-the-dark wires, and circus acrobatics — all speaks to a brand of entertainment that largely exists on the margins of American culture. It’s the type of thing you might see on a children’s show, or to be even more specific, in a children’s theater, where actors perform live for school groups. It might take up a bit in a show like “Glee” — Shum’s presence is not an accident — that otherwise operates as a slightly surrealistic teen soap. It’s the same artistry mastered by the perennially indescribable Cirque de Soleil, which is so often a once- or twice-in-a-lifetime spectacle for vacationing tourists.

It’s telling that “Fake Off” showcases this artistry on television, which doesn’t even have the collective viewing experience of film, and further, bases all of the performances on pop-culture touchstones that are often derived from TV, too. Here’s this scrappy little show trying to survive, but contained within it are all of these young dancers, artists and performers, also trying to survive. And they’re all finding that their best route is television.

In that way, they’re not so dissimilar from the pawnshop owners and manicurists and tattoo artists, who are all peddling handiwork that seeks the exposure of television in order to thrive. But with “Fake Off,” it feels a bit like one form of media is asserting dominance over another—while compressing centuries of live performance tradition into the strange modifier “fake.”

“Real,” I suppose, is a word that has been equally gutted by television. And remix culture blurs the division between “original,” “derivative” and “inspired by”—“Fake Off's" performances feel like a living, breathing manifestation of the remix, where signifiers are made and used and borrowed and discarded as quickly as the dancers can manage.

What’s striking about the show, ultimately, is its optimism. The performers are all gung-ho; the audience gives standing ovations an awful lot; the judges have yet to give any team a score below a 6 out of 10. This is a big lovefest of appreciation for style and spectacle, in a world where spectacle has to fit in a TV screen. Maybe “Fake Off” is a demonstration of how certain art forms are going to die if they can’t figure out how to evolve to television. And maybe the performers, as athletes so often say at the Olympics, are just really happy to have made it this far.