The other C-word: How "You're a coward" became the ultimate American insult

The "Cowardice" author on Teddy Roosevelt's bravery, whether Jon Stewart's a coward, and why wingnuts love the word 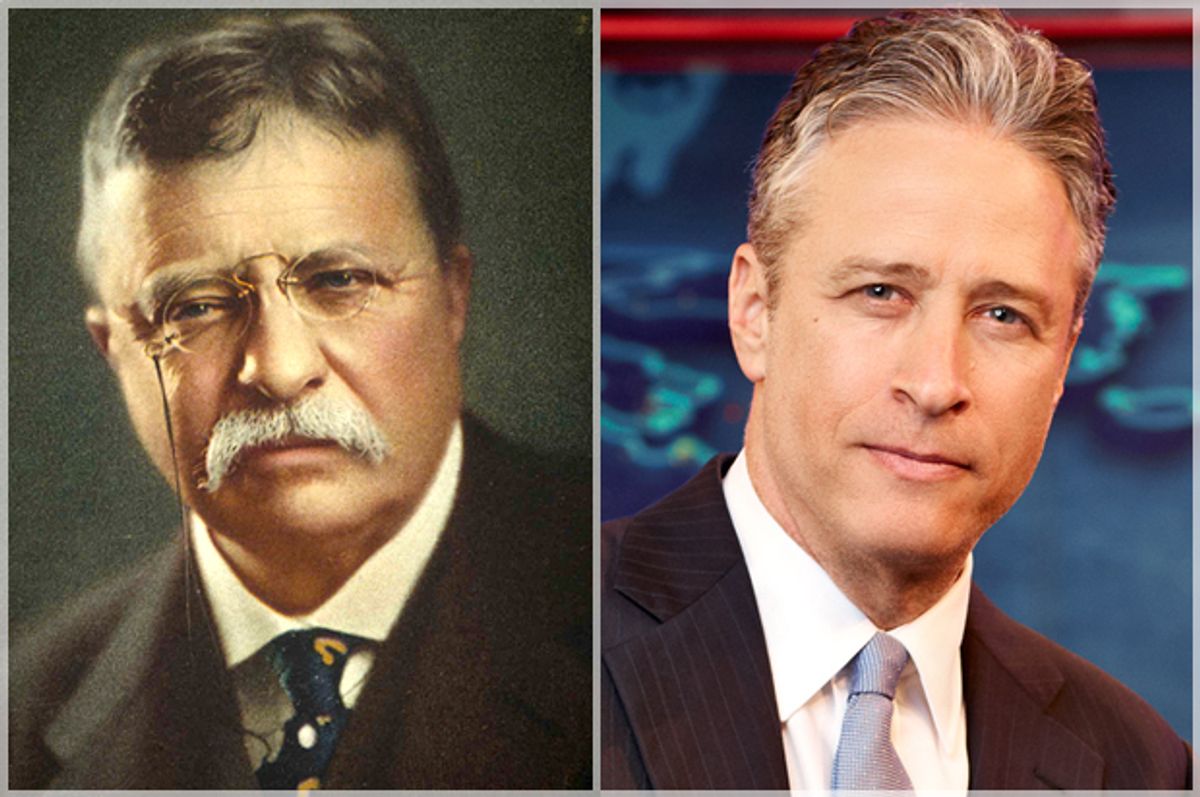 A month ago I was standing in front of a movie theater when a fight broke out near me. Actually, it was more of a beating than a fight. I heard shouting and looked up to see one man hurl another to the ground. The attacker, who was wearing boots, kicked his victim in the face, as if he were punting a football. It was a moment of such abrupt savagery that for a moment I froze.

The attacker then kicked his victim in the face a second time. The man on the ground began to bleed.

The attacker immediately looked at me and growled, “Mind your own business or you’ll be next!”

I had no idea what to do. I didn’t want to become a target for the attacker’s rage. But I also knew I should do something more.

This was all taking place in the middle of a crowded sidewalk. There were two dozen people scattered about, most of them staring into their cellphones, devoutly pretending that a vicious assault wasn’t happening a few steps away from them on planet Earth, an indifference that was probably aided by the fact that both guys had skin and clothing that suggested prolonged exposure to the elements.

A woman who was somehow mixed up with these two men jumped between them, and the victim, still dazed and bleeding, rose from the ground. It was clear he wanted to escape his antagonist.

The attacker glowered at his victim. “Remember that! Remember what I just did to you!”

I don’t think the perpetrator heard me. But he seemed to arrive at a sudden awareness that people were watching him. “This guy is addicted to drugs,” he roared, by way of explanation. “I’m trying to help him out.”

I still wasn’t sure what to do. I was hosting an event at the movie theater, which was set to begin in a few minutes.

So I told myself that the violence was over and went back inside. I could have pulled out my phone and dialed 911. But I didn’t because I worried that I might then be asked to serve as a witness once the police showed up.

I’ve been haunted by this episode ever since.

It wasn’t until I read Chris Walsh’s new book, “Cowardice: A Brief History,” that I recognized precisely why: I felt that I’d behaved like a coward. Which is to say, I failed to protect another human being because I was overwhelmed by fear.

Given the pervasiveness of this feeling in our culture, it’s somewhat astonishing that Walsh’s book appears to be the only full-length study of cowardice in existence.

Fortunately, he’s packed a tremendous amount into 190 pages. The book offers a brisk survey of how the word has infiltrated our cultural notions of valor, and draws on authors ranging from Aristophanes to Dante to Stephen Crane, and philosophers from Confucius to Kierkegaard.

I sat down with Walsh at a bar near Boston University, where he serves as associate director of the writing program for the College of Arts and Sciences, to talk about cowardice and its discontents.

Where did your obsession with cowardice start?

Can you draw a distinction between fear and cowardice?

Fear is natural and everybody has it unless you’re a psychopath. Cowardice is a failure of duty because of excessive fear. I tend to focus on military situations in the book because the battlefield is the poster boy for cowardice. It’s a context in which the definitions of duty and fear are more overt.

But haven’t those definitions shifted over time?

Absolutely. We take a more therapeutic approach today. Back in the Revolutionary War, if you ran from battle and shit your pants you were a coward. Today, the perception is more nuanced. Yes, the person in question was afraid, but this fear might, for instance, be symptomatic of a condition such as PTSD.

You include a wonderful quote from the poet Robert Frost about humor, and irony in particular, as a form of cowardice. I wondered whether you might see figures such as Jon Stewart and Stephen Colbert as cowards?

No, I wouldn’t say Stewart and Colbert are cowards. I see them as confronting corruption with the weapons they have, in their case informed wicked humor.

I’m thinking about something like the Rally to Restore Sanity, where, rather than speaking about morality, they settled for a kind of self-satisfied shtick.

Actually, I think the question of cowardice really redounds to us, the audience. That’s a central argument in the book: that cowardice is about looking at our own sense of duty and our own set of fears and figuring out whether we’re shirking our own personal battles. So I’d question those who derive a sense of superiority and pseudo-involvement from watching Stewart and Colbert, who confuse the flattering of our moral sensibilities with actually taking action.

As a term of rhetoric, I see the term “coward” used a lot more by folks on the political right. Why do you think that is?

The conservative worldview is more bound up with conventional notions of honor and shame. They feel inherent shame in having the government take care of something they feel is their own duty, such as needing the police to protect themselves or their families. There’s a manifesto from the NRA about gun control called “A Nation of Cowards” that laments the idea that citizens are told not to defend themselves from a mugger.

So it’s definitely an arrow in the conservative quiver. At the same time, liberals label Obama a coward because they see him as avoiding battles with Republicans. But if Obama gave in to these worries about being seen as a coward wouldn’t that be a form of cowardice itself? George Washington was criticized for not taking the battle to the British. But in the long run it was the right strategy.

There’s a wonderful moment in your book where you quote the author Tim O’Brien in his fictionalized autobiography “The Things They Carried.” He writes that he went to fight in the Vietnam War rather than heading to Canada because he was a coward. He knew it was his moral duty not to fight in that war, but he didn’t want to be seen as a coward. Does our national fixation on cowardice contain this element of projection? That we call all terrorists “cowards,” for instance, because they elicit our own excessive fears?

The way Shakespeare puts it is like this: “Plenty and peace breed cowards.” We are, in fact, the safest and most comfortable population in human history. And a guy like Teddy Roosevelt was all over this idea more than a century ago. He felt that modern life had spoiled character and that we would do well to live more strenuously. In a sense, he was saying the same thing as William James, who praised the virtues of the martial attitude.

My own sense is that we should stop calling other people cowards and focus on ourselves, our own sense of moral duty and what keeps us from carrying out those duties.

Sure. And you see some of the same uses in Martin Luther King Jr. and Gandhi. As leaders, they used cowardice as a kind of goad. King spoke of the “cowardice of silence.” He accused black people of being cowards. A number of people counseled him not to confront the immorality of Vietnam because it would hurt the cause of civil rights. But his sense of duty suggested that it would have been cowardly not to confront the injustice of that war.

I’m thinking of the definition of cowardice offered by Confucius, about knowing what is right and not doing it.

Absolutely. But an even worse form of cowardice may be refusing to face what is right in the first place. I’ve been thinking about that more and more since finishing the book, the idea that the American form of cowardice may be more about denial than dereliction. That’s what I’m hoping people will take away from the book, that self-examination is essential to defining cowardice. You have to face your own sense of duty and your fears.