The right's "poverty pimp" blast: How a racist trope reared its ugly ahead -- again

New poster plastered all over tars a black member of Congress with slurs. Why modern conservatives haven't learned 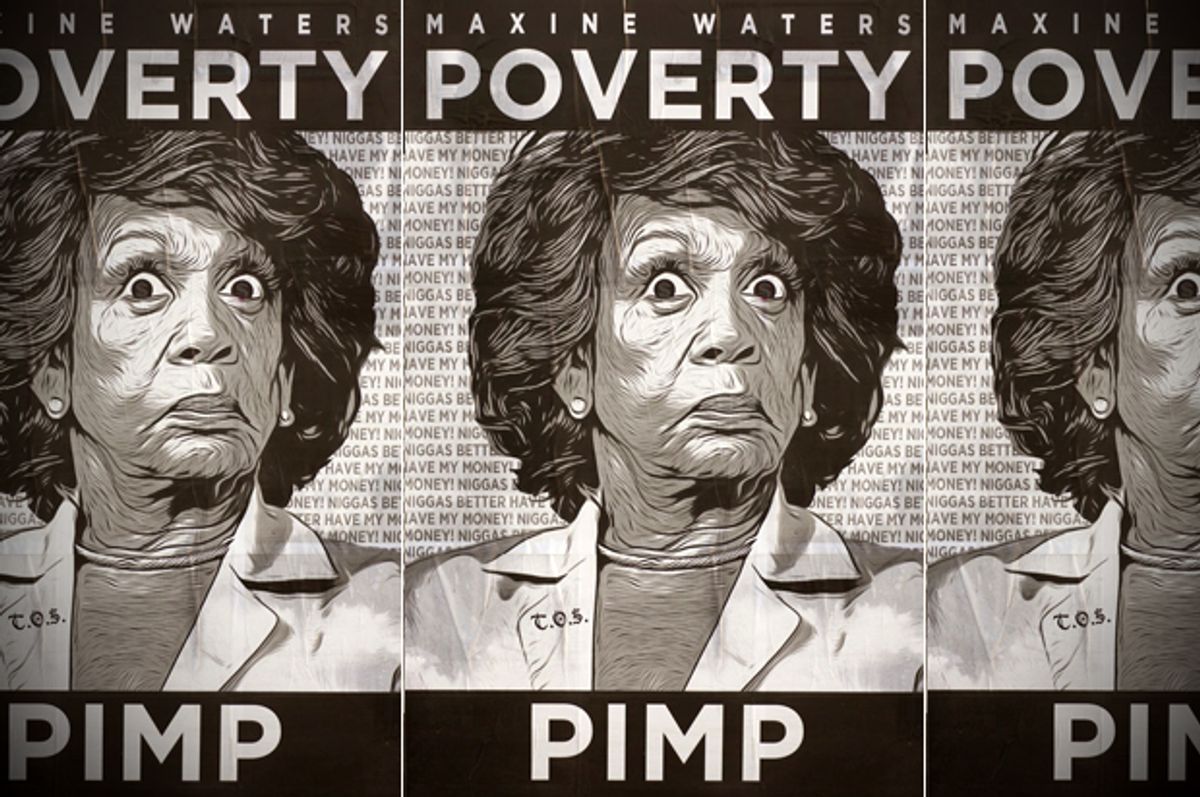 One of the more amusing aspects of modern conservatism is its sad attempts to be modern. In fact, the term "modern conservative" is a bit of an oxymoron, at least when it comes to culture, comedy and art. (When it comes to news and propaganda they are as up to the minute as it gets.) This week's election provides a perfect example of a cultural misfire that fails so badly and so crudely that you would have to feel sorry for them if it weren't so obnoxious. These posters were plastered all over Los Angeles during the campaign:

That's supposed to be Maxine Waters, the Democratic congresswoman from Watts. Now, the art itself is obviously derivative of the great guerrilla artist Robbie Conal, known for his gnarly street post depictions of politicians. Here are some of the more famous examples:

Starting in the 1980s these posters appeared on buildings and electric poles in California and elsewhere and became an iconic style of political commentary through art. This Maxine Waters poster artist clearly aspires to be a Conal knockoff and the work itself is competent, if also obvious. Indeed, if this artist could have restrained himself and taken a more subtle approach it could have been a political comment in itself. Taking the liberal iconography of Robbie Conal and using it for conservative purposes is a clever idea. But as with virtually all of right-wing culture, subtlety is not in their vocabulary so they had to go over-the-top with the obnoxious racist "poverty pimp" title and the even more racist commentary underlying the portrait.

The term "poverty pimp" is a term only used by right-wingers to describe liberal black leaders. It shouldn't be necessary to explain why it's a racist trope but it's worth doing anyway, just so there's no misunderstanding. To call African-Americans "pimps" is a racial insult designed to evoke images of violent inner-city stereotypes. The "poverty" part of the dig refers to people who promote programs to help the inner-city poor (aka "welfare queens") with the implication they are advancing their careers at their people's expense. Wikipedia offers up this example of how it's commonly used in right-wing circles:

Scoggins's experiences with government intervention confirmed his political heritage. At age ten, he had helped his family campaign for Eisenhower in the 1956 election, carrying the basket from which they sold chicken sandwiches up and down Tulsa's historic black business district. "You had every last thing you wanted there. Welfare was not even thought of," Scoggins says. Businessmen represented the black community, not a "bunch of ministers or poverty pimps, like today," Scoggins recalls

This is the essence of the conservative critique of the so-called poverty pimp. Everything was much better for African-Americans back in the day. They had everything they needed, including chicken sandwiches delivered by nice white people. The problems arose when those awful leaders came along and riled them up. (And you also cannot ignore the fact that right-wingers always think they're being exceedingly witty with these sorts of insults.  The smug "who me?" look on their faces whenever they are confronted with their bigotry gives the game away every time.)

But you have to look beneath that odious "pimp" trope to see the other racist ugliness lying beneath it. The words that are repeated under the portrait are "N---ahs better have my money!" which, it's fair to guess, is a take on the Tyga song lyric "bitch bettah have my money."  It's bad enough that they are calling Waters a "poverty pimp," which is, at least, a crude racist metaphor.  But to repeatedly use the worst epithet imaginable on the poster for no discernible reason other than to use it really takes it to the next level.  White supremacists must have cheered when they saw it.

The right-wing media have given this poster a big thumbs up and are very disdainful of civil rights groups and individuals who have registered their dismay.  They keep bringing up Bush Hitler posters as if that somehow cancels out the outrage. The fact is that politicians on all sides always have to put up with being caricatured. It's been going on forever and it's always been a powerful way of communicating political opinion.

There's nothing inherently wrong with criticizing Maxine Waters the politician. Even the portrait, which is hardly attractive, is fair enough. The problem, which right-wingers fail to grasp over and over again when these issues come up, is that our long history of racist iconography and ugly stereotypes are not fair to use when criticizing African Americans. This artist could have made his or her statement about Waters without employing a racist trope about pimps and certainly did not need to use an unacceptable racial epithet on the poster. That's brain-dead bigotry, not political commentary.