"You and I are made of stardust": Bill Nye's weird and whimsical Reddit AMA

In his AMA, Nye talks evolution, "Game of Thrones" and his tips for taking quality selfies 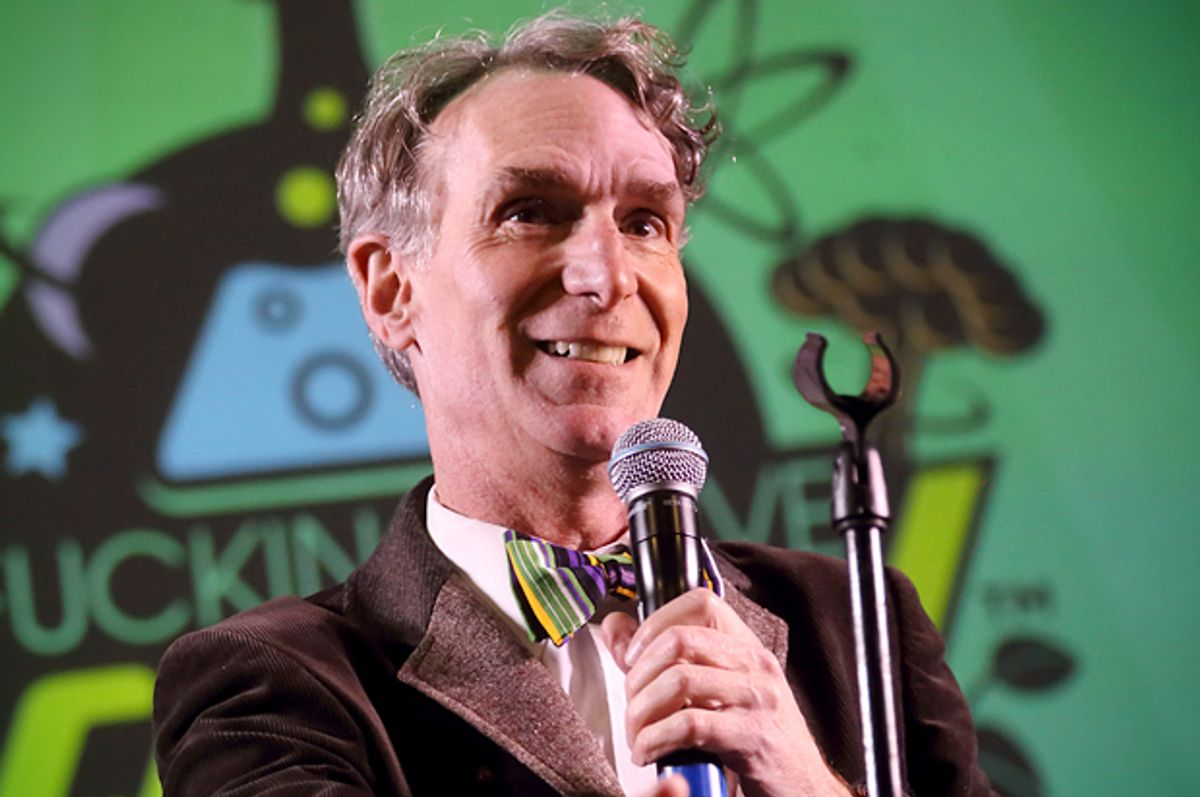 Just in time to combat a serious case of the midterm election hangover blues, Bill “the Science Guy” Nye hosted a Reddit Ask Me Anything session this afternoon, fielding questions from fans about the environment, science education, sustainability practices, and birds. For those who were starting to wonder if the entire country had rolled backward, Nye offered reassurance that evolution is still a fact, that climate change is serious business that we need to talk about, and that polite but firm disagreement is still possible.

Nye says unequivocally that climate change is the most important issue facing humankind — not the planet — today. “A clear but troubling feature of nature is that the earth will be here no matter what you or I do. We want to preserve the earth's ecosystems for us, for us humans.”

And so he urges Americans who are concerned to speak up. “It needs to become a part of our everyday conversation (the way it is everywhere ELSE in the world).” He even wants to update his Epcot ride to focus on the issue, which he says made corporate sponsors nervous when it was first designed.

But Nye doesn’t just want to talk about it. When asked about the one thing he would change if he could take over the world, he picked “a carbon fee,” giving a generous hat tip to conservative Alaska for pioneering the practice.

“We would charge everybody who produces carbon dioxide a fee, and that fee would go into a central fund, and be redistributed,” he wrote. “The average citizen of the US would receive, would get back, about $3,500. Oil companies have already built this fee in—they are planning for it, they know it's coming sooner or later, it's in all their financial plans. If we could see this moment, we could change the world.”

It’s not going to happen until the U.S. leads, he says, and he wants the politicians elected yesterday to take note. “If the United States were leading the world in addressing climate change, it would be addressed in a heartbeat,” he wrote. “Let's get going.”

Nye also gave a shout-out to Oklahoma Sen. James Inhofe, the vocal climate change-denier who will likely chair the Senate Environment and Public Works Committee now that the Republicans have the majority, saying that he wished Inhofe had stuck to his original plan to retire. “Although he doesn’t mean to, he’s leaving the world worse than he found it.” Bill Nye’s not mad. Bill Nye’s just disappointed.

But we can stay busy while we’re lobbying Congress. We’re “clearly not doing enough” in terms of sustainability practices, and like all good teachers, he throws the challenge back to the budding engineer who asked: “I want YOU to invent the better electricity storage device, the better battery, and I want you to invent a more efficient way to desalinate water. If you can do either or both of those things, you could utterly change the world.”

When a plant scientist challenged him on his concerns about GMO-created eco-disasters and advocacy for mandatory labeling, calling the media’s treatment of GMOs science denialism, too, Nye met the criticism head-on, but politely.

“Sir, or Madam: We clearly disagree. I stand by my assertions that although you can know what happens to any individual species that you modify, you cannot be certain what will happen to the ecosystem,” he wrote. Also, we have a strange situation where we have malnourished fat people. It's not that we need more food. It's that we need to manage our food system better. So when corporations seek government funding for genetic modification of food sources, I stroke my chin.”

He also touched on evolution, saying that it’s wrong to suggest there are other valid scientific theories that challenge it. “Evolution is the fundamental idea in all of life science. So I've taken it on as an important issue for the future of the US, and for all of humankind. I'm not kidding.”

Favorite movie? “Singin’ in the Rain.” His thoughts on “Game of Thrones”? Never seen it. “It seems to me that it is probably not based on a true story.” His best tip for taking awesome selfies? “Hold [the phone] slightly above your eyeline so your eyelids don't look closed.”

With everything he knows and has seen, Bill Nye remains most amazed by bumblebees and hummingbirds. And he embraces the inevitability of cryptocurrency, but still wants to wear an analog watch. His favorite scientific fact may be his most charming answer: “You and I are made of stardust. We are the stuff of exploded stars. We are therefore 1 way the Universe knows itself. That, to me, is astonishing.”