Gardner and Tillis played up their commitment to birth control before the election. Time to cash that check! 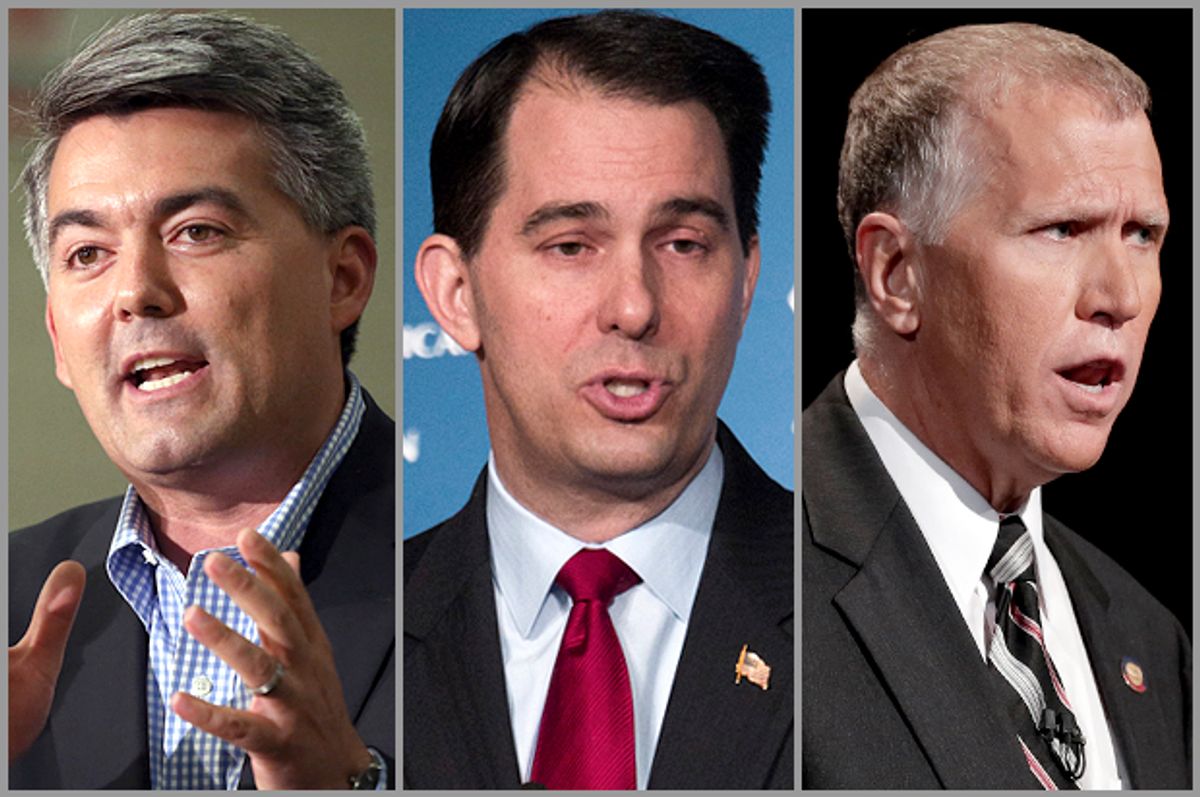 It's only a few days out from the 2014 midterms, but the GOP's freshman members are already setting their agenda for the coming year. In Tennessee, newly elected Republican state Rep. Courtney Rogers has signaled she'll support new restrictions on abortion access when the General Assembly reconvenes in January. Iowa's Joni Ernst is sharpening her knife in anticipation of ritual pig castrations. And while I haven't read anything to confirm this yet, I can only imagine that Colorado's Cory Gardner and North Carolina's Thom Tillis are preparing some draft legislation on expanding access to over-the-counter birth control, an issue that they very clearly hold dear.

Like Gardner and Tillis, I strongly support expanding access to birth control. We're just a couple of reproductive health peas in a reproductive health pod. But unlike Gardner and Tillis, I think that making oral contraceptives available over the counter won't meaningfully address the cost barriers that prevent low-income women from accessing birth control and think that expanding Medicaid is the real solution here. I also agree with the American Congress of Obstetricians and Gynecologists that over-the-counter birth control should "be part of a broader dialogue about improving women’s health care, preventing unintended pregnancies, and increasing use of contraception, including long-acting reversible contraception." But this isn't a perfect world, so Gardner and Tillis and I will have to agree to disagree about the Affordable Care Act and health insurance as a human right, but nonetheless fight on in our shared mission of making birth control easier to access because we are all, obviously, equally sincere about this important issue.

Gardner stated very clearly in a campaign ad that he believes "the pill ought to be available over the counter, round the clock, without a prescription.” I realize that there will be more work to be done to ensure that women who can't afford birth control without insurance are able to get the healthcare they need, but I still look forward to Gardner's introduction of the Round the Clock Birth Control Act in the next term. It will truly be a great bill.

In a debate with his Democratic opponent Kay Hagan, Tillis said that birth control “should be made available and probably more broadly than it is today.” Which is why I also look forward to the moment when Tillis introduces the Made More Available and Probably More Broadly Birth Control Act of 2015. I think it could really move the needle, and maybe inspire some of his Republican colleagues to embrace the fact that birth control is basic medical care.

Sure, I am disappointed that Gardner and Tillis, in their quickness to stand with the American Congress of Obstetricians and Gynecologists on the issue of expanding access to over-the-counter birth control, neglected the second half of that position about being part of a "broader dialogue." And it's not ideal that their singular focus on wanting to make birth control available to women at their local pharmacies may have blinded them to another report from the medical association on the efficacy of the IUD as a method of birth control, but I take comfort in knowing just how sincerely committed both of these men are to this mission of getting oral contraceptives sold over the counter. I am eager to hear their proposals to make that a reality.

Planned Parenthood shares my enthusiasm for Gardner, Tillis and others' mission to expand access and support choice, naturally. They made a video to show their enthusiasm.