"You have to go in head first" 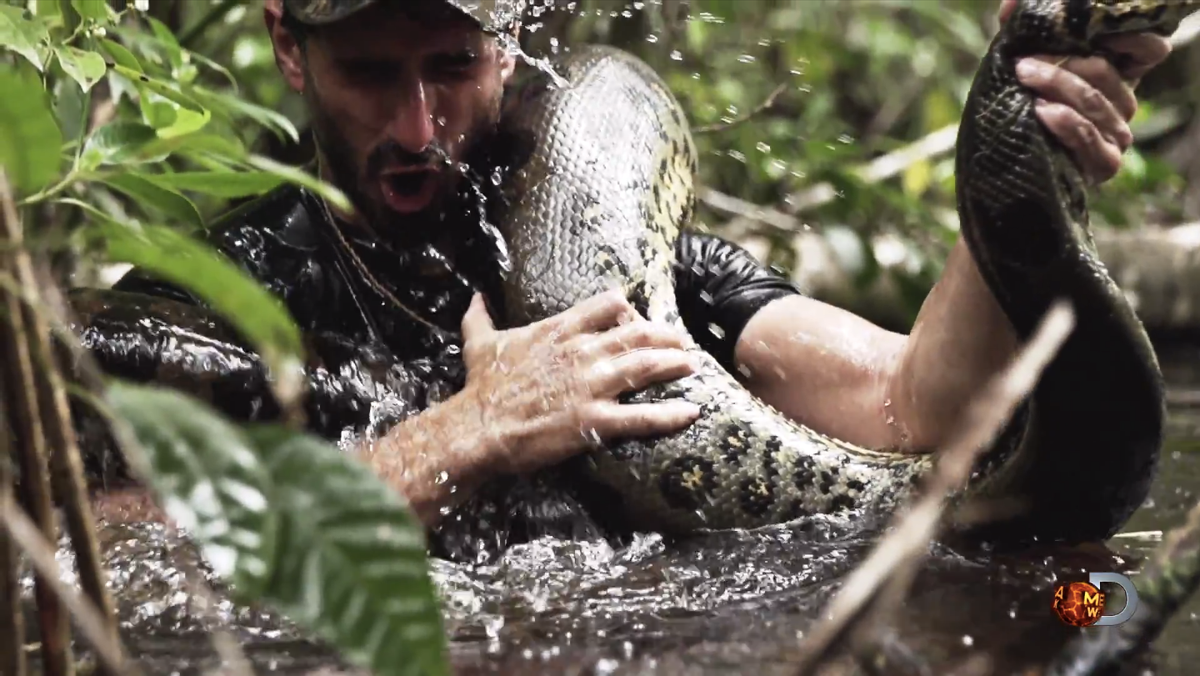 Discovery Channel made a name for itself with educational-cum-reality television, that paired a science lesson with a really cool shark video, or a travel show with a lesson about sustainability. Those days are far behind us. Shark Week is now nothing more than a week of very bad horror movies, and its regular programming features block after block of exploitive, superficial shows about rural communities engaging in wacky practices.

Their newest attempt at entertainment, however, crosses the line from bad taste to outright [probably simulated] animal abuse.

"Eaten Alive," a special that will air on Dec. 7, will show filmmaker Paul Rosolie cover himself in pig blood (and a protective suit with a cord at the top) and purposefully get swallowed by an anaconda. In the trailer, a team of attractive explorers venture into the jungle to search for the snake, which they capture and relocate for the stunt. According to Entertainment Weekly, the snake did not die.

Understandably, the show's premise has garnered some pushback. A Change.org petition asking Discovery to cancel the program has over 3,000 signatures and reads: "This is animal abuse to the highest degree and absolutely disgusting, and could kill the snake -- an adult green anaconda cannot fit the width of an adult man's shoulders into it's body." The petition also notes that the show reinforces a negative stereotype that snakes are predators, which is ostensibly the opposite of what Discovery should want to do (although we already know that is exactly what Discovery does best).

Business Insider's Kevin Loria consulted with Frank Indiviglio, a herpetologist who has worked with the Bronx Zoo for over 20 years. His response: "Nonsense; not possible."

Rosolie has responded, noting his past work promoting animal welfare:

"All I can tell you now is that all my work is based around the fact that wildlife and ecosystems today, across the globe, are at a critical moment. No group of animals so much so as our apex predators. From sharks, to tigers, to anacondas -- across the globe the biggest and baddest, some of the most iconic creatures on our planet are vanishing because of us. The snakes that I work with are under threat from hunting and habitat destruction, and need help. Anacondas are a major player in the Amazon ecosystem that provides 1/5 of our planet's oxygen and contains 1/5 of the planets [sic] fresh water. For those worried about animal cruelty, I invite you to research my work – read my book. Then ask yourself: would this person ever hurt an animal?

It does seem like Rosolie is a dedicated naturalist, which begs the question: Is Discovery just promoting this in a deceptive, sensationalist way (probably) or has Rosolie made an uncharacteristically bad decision? Regardless of whether the animal was really harmed, Discovery's insistence on promoting bad science and fear as conservation is an indication of its utter lack of quality.