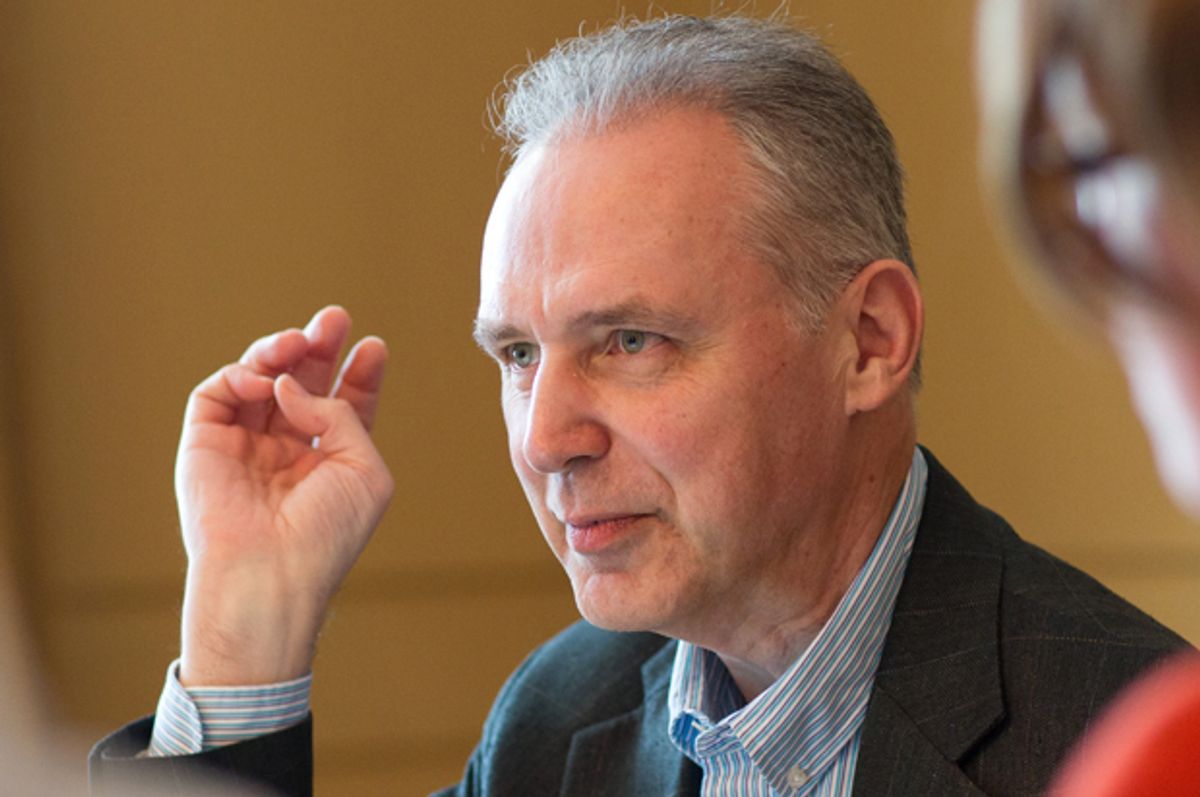 Way back in 2012, during that simpler, gentler time for liberals and Democrats, President Barack Obama secured a second term in the White House by clearly defeating former Massachusetts Gov. Mitt Romney in the Electoral College as well as the popular vote. Coming after a first term characterized by financial disaster, near-unprecedented polarization and rampant economic and social inequality, this was quite an accomplishment. Perhaps most amazing of all, he did this despite voters ranking his opponent as superior on nearly every issue.

But here's the thing: The one issue where voters clearly preferred Obama was a big one, perhaps the biggest there is. According to an exit poll from ABC (but whose results were echoed in the polling of other organizations), voters told pollsters that they considered President Obama overwhelmingly more likely to care about "people like me." How overwhelmingly? The point-gap between Romney and Obama on the issue was no less than 63. Most Americans, in other words, chose Obama despite being lukewarm about his record, and did so in part because they believed he had a greater capacity for empathy.

It shouldn't come as a surprise, then, to find that the concept of empathy has lost considerable favor among conservatives since 2012 (although, to be fair, it was never their top priority). But while we've seen rants in Breitbart or the New York Post about the folly of empathy, we hadn't seen the argument put forward much by a more learned member of the conservative movement. And this is where "The Pity Party: A Mean-Spirited Diatribe Against Liberal Compassion," a new book from the conservative author and Claremont Review of Books editor William Voegeli, comes in.

In order to hear why "no compassion" should be treated as a political mantra (and not just a great Talking Heads song), Salon recently spoke with Voegeli over the phone. Our conversation is below and has been edited for clarity and length.

Why the focus on compassion? Why do you consider it to be a distinctly liberal political value?

I thought for a conservative trying to understand liberals as they understand themselves it seemed necessary to go there, because it's a big part of the liberal self-identity. Certainly, the rhetoric coming from politicians, Op-Ed columnists, others, emphasizes that as being a fundamental divide [between the left and the right], that liberals are caring and supportive and deeply concerned about the welfare of others; and, in the liberal view, that conservatives are people who are cold, indifferent, greedy, cruel. It seemed that to understand liberalism and not to address that was a pretty big failing, so that was part of it.

Also, as a conservative, it seems pretty clear that liberals and conservatives, in a sense, both agree that this is a politically advantageous position for liberalism. To define the fundamental political divide in the country as between the politics of kindness and the politics of hard-heartedness is a great advantage for the former, for liberalism. The fact that conservatives have, over the years, tried to formulate a response — George W. Bush’s compassionate conservatism being one — tells us that conservatives feel bothered by this. They feel that it poses a challenge that they need to meet, and I don’t think the response to date has been hugely successful, so there was room for improvement and further examination of the question.

And do you think this dynamic is new? Are we thinking more about compassion in political terms than we used to?

I think compassion as a liberal virtue has been prominent for as long as there has been liberalism (in the sense that Americans have used the term for about a century). You can find clear examples of Franklin Roosevelt’s rhetoric, for example, making an issue of it. So, up to a point, I think it’s a constant rather than a variable. But I also think it’s the case that it is more prominent now than it was at one point.

During the Cold War, in the aftermath of WWII and the awareness of the tremendous capacity for evil that was shown by [it], I think there was a strong emphasis within liberalism on tough-mindedness, which tended to work against the force of compassion in some way. Liberals strove to be seen as, and to understand themselves as, not simply sob sisters but also tough-minded, decisive pragmatists who understood the world was a tough place and how it worked. But I think that that effort didn’t really take.

You focus a lot in the book on questioning the wisdom of making compassion a major political virtue, but I'm guessing you might not feel that way if you thought the policies that resulted were effective — which, to state the obvious, you don't. Can you explain how you conceive of the relationship between politicized compassion and public policy?

If the liberal project were consistently generating good, successful results, I think the quarrels with the theoretical underpinnings would be much less urgent. But if there’s a connection between the failures in theory and the failures in practice, as I try to argue, then it becomes more consequential.

The link I attempt to make is that part of the problem is embedded right in the idea of compassion itself. It’s a word derived from Latin that means, literally, to suffer together. I think it’s that "together" that’s tricky, because in the theorizing of, say, Rousseau, compassion becomes a good basis on which to organize a modern society because it gives people an incentive to care about the well-being of others. Your suffering causes a response in me, an internal agitation, and now I have a reason to address your problems. I feel miserable about your hunger or sickness or homelessness or whatever, and because of that bad feeling I have, something must be done.

Where I think this kind of compassion lends itself to bad governance is that if the motivation for doing some thing is, “Gosh, I feel terrible about seeing you in such a bad state,” then it’s terribly, dangerously easy for the resolution of that tension to be, “Let’s do something so I don’t feel so bad anymore,” and instead of focusing on helping the person inspiring this empathy feel better, it’s all about the empathizer feeling better. That’s not so good, and I think this is why there is, in many respects, if you look at the overall liberal project in this country, a weird complacency about things not working out very well, about programs being expensive, about them being poorly targeted, etc.

I think a significant part of the answer as to why liberal policies don’t do a better job of achieving their desired results is because of the strangeness of compassion, and because of its dubious reliability as a moral north star to steer by. Liberals, in a funny way, wind up not really caring that much whether the machinery they built functions optimally; by having built it, by having demonstrated their concern, they pretty much achieve the implicit but most important objective.

You know, one of the things I find interesting about that argument is that it's basically the same as what leftists and doves say when they're going after liberal hawks. Take Libya, for example: A charge I've seen thrown at supporters of that intervention by people to their left is that they only cared about the country until Gadhafi was dead, until the U.S. had "won," and then quickly lost interest — despite the fact that for most people in Libya, the post-Gadhafi era has just gotten worse and worse.

The point of the book is not that we’d be better off if we were less compassionate, but that we have to understand compassion’s limitations, one of which is that it tends to react to the evidence right in front of it and to work against the long-term liberation that more effective and wise policymaking requires.

Something like Libya — that’s a vivid thing on our TV screens. We react. But then other things happen and we forget about it. It’s not that we’re less compassionate [than we were] but that our compassion is now directed elsewhere; we are suffering as a result of some new person’s suffering now. That other person's suffering is yesterday’s news.

I don’t know that I’ve worked all that out. It seems to me that it’s hard to draw a boundary you feel confident about because it’s difficult to know whether liberals are different from leftists on the basis of truly prudential concerns, or whether there are more fundamental disagreements.

Bill Clinton is a good example, with his triangulation during his presidency. To this day, it’s still not clear to me ... whether Clinton’s accommodations to Gingrich Republicans — signing the welfare reform bill in 1996, things like that — was just masterful strategy or whether he genuinely believed that these qualifications of the New Deal/Great Society legacy had merit for their own sake, apart from the cause of winning elections.

In that sense, I feel that the political standpoint of those people who think of themselves as being to the left of mainstream liberalism, and are critics of it, and trying to pull it further away from the center — it seems that they are either more intellectually honest, or perhaps less politically serious, than mainstream liberals.

Along the same lines, when it comes to examining rhetoric in the book, you transition from politicians to intellectuals to activists and back again. Do you not think there's much of a distinction between these different types of actors?

Not a big distinction, I would say. I guess I'm effectively a Tocquevillian when it comes to this, which is to say that I think the democratic pressures are more obviously influential on a politician running for office than a columnist in a newspaper or even a tenured professor writing a paper, but I think Tocqueville is right in [noting] that those pressures are so strong that they’re also quite influential even on people who think they're in a place where they can be immune from them. So I think all of us, almost all the time, are saying what we’re saying and doing what we’re doing with a consciousness of what the society we’re living in will and won’t accept shaping our decisions.