"The president is basically in hiding": Thomas Frank unloads on Dems, Kansas and crushing midterm losses 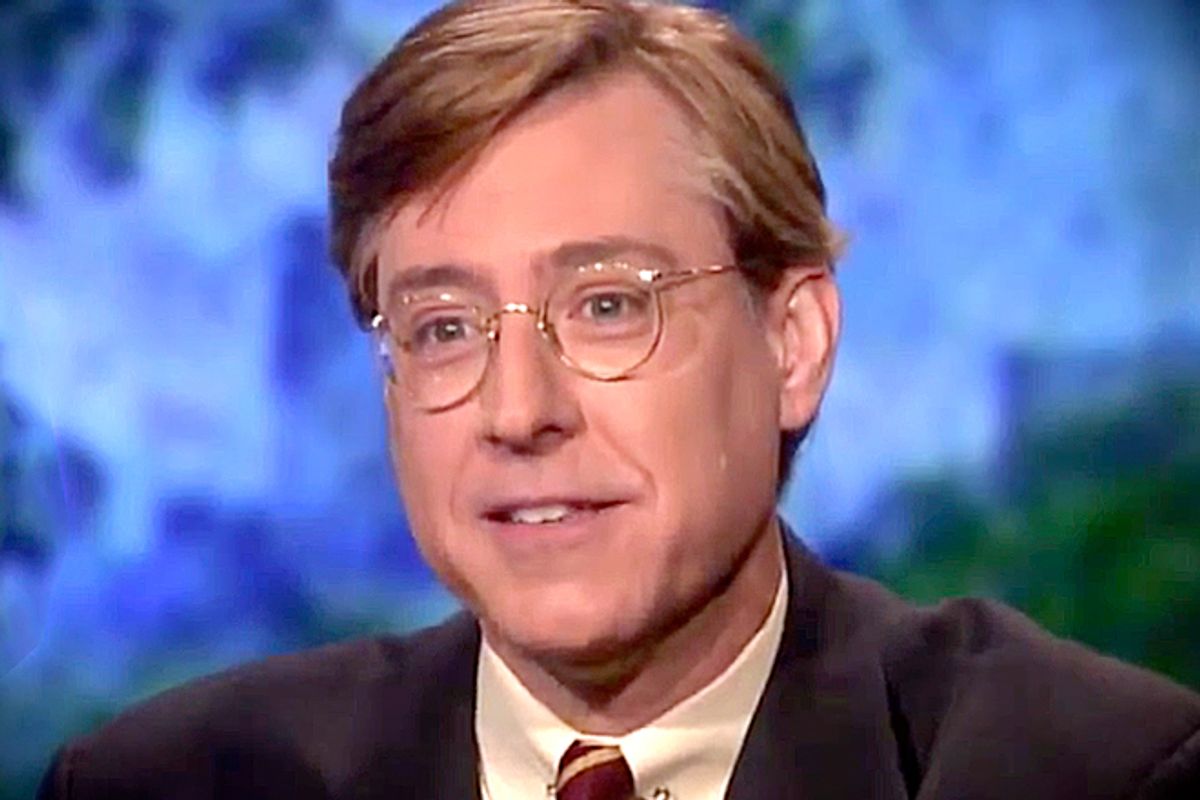 In an election that witnessed crushing Democratic losses in the U.S. Senate, the House of Representatives, and in key gubernatorial races, the victories of Kansas Republicans Sam Brownback and Pat Roberts have been among the most painful for many Democrats to absorb.

Gov. Brownback, after all, trailed Democratic challenger Paul Davis in the polls for most of the 2014 cycle, owing to the destructive fiscal consequences of his large tax cuts. While Democrats expected to sustain tough losses elsewhere, the prospect of knocking off a right-wing governor in Kansas in an otherwise good year for the GOP provided at least some solace. Likewise, the perception that Sen. Roberts had lost touch with the Sunflower State after 34 years in Congress and the vigorous campaign waged by independent Greg Orman presented a rare opportunity to defeat a GOP Senate incumbent.

Neither victory was to be. Brownback will preside over Kansas for another four years, while Roberts dispatched Orman by a larger-than-expected 11-point margin. What went wrong -- and what lessons can be drawn about the GOP's other election night victories? In the interview that follows, Thomas Frank, my Salon colleague, fellow native Kansan, and author of What's the Matter with Kansas dissects the results -- and goes hard after what he calls an inept Democratic Party's pathetic response to its electoral defeats.

So to start, you obviously know a thing or two about Kansas politics. What happened Tuesday night – how did Brownback and Roberts manage to pull it off?

The crazy thing is that the polls were showing the opposite. I mean, Kansas is a notoriously difficult place to poll, because it has so many rural voters. But nevertheless the polls showed both Orman and Davis winning right up till the end there.

It’s something of a surprise. I guess you have to chalk it up to the national Republican wave. With Roberts, you saw this enormous effort by the national Republican Party to rescue him once it became clear that he was in big trouble back in September. The Republican Party started sending all of its heavy hitters out to Kansas to rally the troops on his behalf. And in fact I myself went to one of these events and described it in Salon the other day. Chris Christie was there and a bunch of governors from Republican states and Bob Dole all showed up. Brownback was there, too. At the same time, I went to a Greg Orman event and was the only media person there. Very peculiar – I’ve never seen something like that.

Now, the revulsion in Kansas against Roberts mainly had to do with this matter of him not actually living in Kansas. And once you started digging a little bit, you realize how little the guy has  done in his time in the Senate, and he’s going around the state and has very little to show for his many, many years – decades, now, in Congress. He has little to show for it and little to brag about.

But the robocalls were coming constantly while I was there. You’d pick up the phone and it’d be somebody – I can’t quote it exactly, but we got a robocall two days ago at my family’s house urging them to vote for Roberts. Why vote for Roberts? This is what the robocall said: it would make Obama cry. And as risible as that appeal is, I guess it worked at some level.

There are other factors, too. Roberts made a lot out of the fact that Orman was a private equity guy. I mentioned this in the story. There’s a whole strain of class-baiting of Orman by Roberts in his ads that were running on TV and everything else that you heard. It was highly ironic – and Orman and I talked about how ironic it was – because Roberts himself is an errand boy for the Chamber of Commerce and Farm Bureau and people like that – these sort of spokesmen of the corporate world. So it’s pretty funny that he would ever criticize anyone else for being a tool of Wall Street.

But that was the story of my book What’s the Matter with Kansas, and it’s kind of the story of a lot of Republican victories ever since then. They make it seem like they’re on the side of the long-suffering working class voter – when anyone who reads the newspaper can tell you they aren’t. But it’s so commonplace it just flows right off of you now. You get so used to Republicans identifying themselves with the working man you don’t even notice anymore.

Brownback was a different case. He was a guy who had really put the state economy at risk with his enormous tax cuts – tax cuts, by the way, that were heavily weighted toward the very rich. For people at the bottom of the income scale, they actually went the other direction, because whenever they cut taxes, other taxes have to be increased in order to try to make up for the shortfall. So sales taxes, property taxes, and all that good stuff.

So for people in the lower half of the income distribution, they have almost nothing to show for it. And ironically, a lot of those people are Brownback’s voters. It’s the professionals in Johnson County [a wealthy suburban Kansas City-area county] that Brownback has troubles with.

There’s an important thing to remember: the consequences of what he’s done are only starting to materialize now. It’s going to get much worse over the next four years. And this is where his opponent, Paul Davis, was very cagey about what he’d do to fix these problems. He talks about these problems all the time, but what’s he gonna do to fix them? Is he going to raise taxes? He wouldn’t say so. And I started wondering at one point during the campaign, “Does this guy really want to be in charge of this economy – the Titanic after it hit the iceberg?”

But Brownback will have to own the consequences of his policies. He’s been traveling around the state saying, “just give it time, the experiment is going to work, stay the course.” He’s very much channeling Reagan in 1984.

So does his victory represent voters saying, “Sure, we’ll give this time,” or was it more than just economic issues at play? Did he win in large part because of the standard GOP strategy of using social issues as wedges in places like Kansas?

Well, What’s the Matter with Kansas was published in 2004, and was written in the years before that, when the culture wars were flaming out of control. What’s happened since then has been, obviously, economic catastrophe. I read a very interesting thing just now – in the exit polls, an enormous percentage of voters believed the recession is still going. The recession technically ended in 2009, but lots of people don’t see any advantage from [the recovery], and that anger was  the dominant feeling in ’08, in 2010, 2012, and now we have the fourth hard times election in a row.

Those concerns have really – I don’t want to say they’ve pushed the culture wars off the stage, because you still have the culture wars, of course. But the problem comes when you start to talk about economic issues in cultural terms. Brownback is a big offender in this regard. When I was listening to his victory speech last night on the radio, this is a man who came very close to saying the free market system is divinely ordained. He doesn’t come right out and say that, but he comes very close to saying that, and he does it all the time.

And that in a nutshell has been the Tea Party Republican response to the economic disaster – to say we have to get back to this divinely ordained free market system. Anyone who knows anything about the Great Depression in the 1930s  knows that that’s not the way to go, but it sounds really good when that’s the only expression of discontent out there. The Republicans have got a pat answer for everything, and it’s very flattering to certain kinds of people. Most importantly, when it’s the only expression of economic anger out there, it tends to carry the day.

The Democrats’ failure or inability to be the party of Franklin Roosevelt– remember, the reason we have the Democratic Party, the reason they still exist as a national party is because of what they did in the 1930s, their heroic period. And they’re incapable of doing those kinds of things today. You think of the way they could have responded to Wall Street.

That brings me to the Republican victories last night beyond Kansas. Did Democrats lose because voters are buying the GOP’s message or because Democrats haven’t countered it effectively?

I think it’s a little of both. But there’s a third thing – you’re caught in a wave. It's an off-year, Obama is unusually unpopular. And the national Democratic Party is not providing any leadership. The president is basically in hiding. And what’s more, he hasn’t done anything for two years – or anything important, that is, anything that gets people excited about being Democrats.

He did some great things early on. He had a lot of promise early on. But that’s now quite a while ago.

Now in the Kansas races, both the Orman and Davis campaigns were protest candidacies where they didn’t have to say a whole lot because it was a referendum on the Republican in question. Maybe if they had proposed something bold and new, things would’ve been different. When was the last time you had a Democrat who did things like that, though?

Well I’ve heard a fair amount of chatter after last night that we need to shake things up moving forward by putting forth more progressive faces like Elizabeth Warren. Could the populist message of someone like Warren have prevented last night’s drubbing?

Someone like Elizabeth Warren is what is required to revive the party – but I think that’s not what the party will do.

I’m almost 50 years old, and in my life the Democrats have endured a long, long, long series of beatings like this. And every time it happens, they have a very predictable response, which is that they decide that they were too far to the left and that they need to move to what they call the center. And this happens after every electoral defeat. They do the same thing. It would be surprising to me if they didn’t do that this time.

Even today, you had Obama come out in his post-election press conference, where he said his three big items for cooperating with the GOP were infrastructure spending, which isn’t going to happen; tax reform; and trade agreements –

If Obama had revisited NAFTA [the North American Free Trade Agreement] – remember, he promised to do this in 2008 – he was gonna renegotiate NAFTA. You know how much the public hates NAFTA?

Arguably one of the reasons he’s so unpopular is because he refuses to do things like that. So he refuses to renegotiate NAFTA, he becomes very unpopular, the Republicans whip his party in this terrible disaster, and his response is “more free trade deals”! There is some logic by which that makes sense, and it’s a logic that’s very familiar here in Washington, D.C. You move to the center, you always move to the center. But it’s a logic that’s just going to lead to more and more disasters down the road.

Or maybe not. Maybe this will lead to great victories for Democrats, but along the way, if they do enough of this triangulation, they'll become a party that has become so similar to Republicans, then why bother with them?