Boehner serves up some brazen immigration lies, and makes the case for Obama acting immediately on deportations 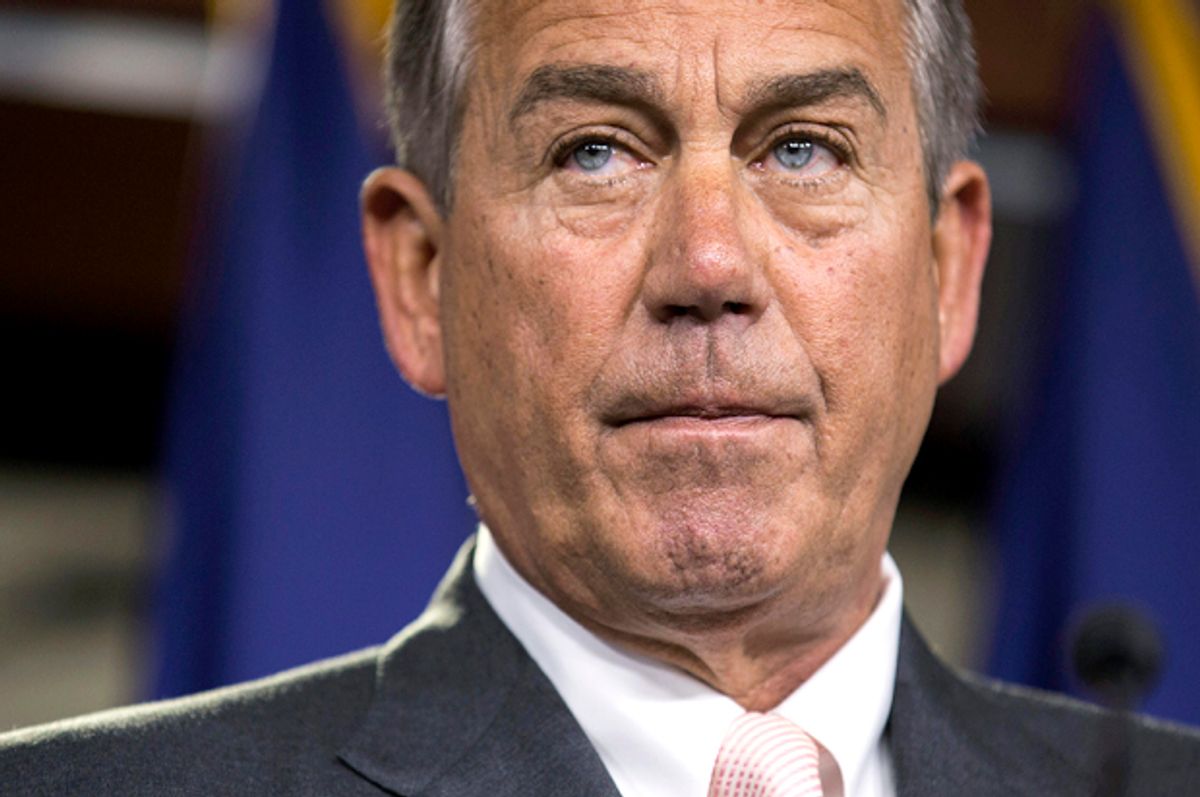 House Speaker John Boehner gave his first post-election press conference yesterday afternoon and spent a not insignificant portion of it brazenly lying about immigration reform. With the Republicans in waiting to take control of Congress and President Obama ready to take his long-promised executive action to ease deportations, reporters peppered Boehner with questions on immigration. He lied his way through them, reinforcing just how little trust the White House – or anyone – can put in Boehner and unintentionally making a very strong case for Obama to plow ahead and take action on his own.

Before we get to the actual presser, let’s go all the way back to July 2013, right after the Senate passed its comprehensive immigration reform bill. Boehner had long been making noises about passing immigration reform (he was one of many establishment Republicans who’d been spooked by Mitt Romney’s comically poor share of the Latino vote) but was adamant that the House would not vote on the Senate’s bill. Instead, Boehner said, the House would pass its own bill. He promised it would happen.

“I’ve made it clear and I’ll make it clear again, the House does not intend to take up the Senate bill,” Boehner said Monday. “The House is going to do its own job in developing an immigration bill.”

He added, “It is time for Congress to act. But I believe the House has its job to do, and we will do our job.”

Boehner did not do that job. He failed. And the reasons he failed are manifold: He has an ungovernable House Republican majority with an influential wing of nativist conservatives who won’t agree to any immigration legislation beyond locking down the border and deporting everyone; his members are petrified of their own base mounting primary challenges from the right should they show even the slightest sign of backing immigration reform (see: Cantor, Eric); and as the midterms approached, the Republican leadership decided that it would be better to sit on their hands than risk an intraparty fight over a hot-button issue.

This isn’t controversial or groundbreaking stuff – this is what Republicans themselves say (some of it in public, the rest on background to journalists). At yesterday’s press conference, Boehner was asked how he can expect to work with the White House on immigration when just a few months ago “your conservative members yanked you back.” Boehner huffily dismissed the premise of the question and instead served up this whopper: “What held us back last year was a flood of kids coming to the border because of the actions the president had already taken.”

Oh, there’s just so much garbage to unpack in that short answer. The border crisis only became a national issue during the summer months of 2014. An entire year passed between the passage of the Senate bill and the moment when Congress took notice of the tens of thousands of Central American minors streaming across the southern border. In that time Boehner made zero progress on immigration reform. Also, the border crisis was actually a really good argument in favor of passing immigration reform, given that it authorized new spending for processing undocumented immigrants. Also also: The border problem actually laid bare just how powerless Boehner is against the nativists in his own caucus when Steve King forced him to pull a last-minute legislative fix because it was insufficiently hostile to immigrants who had nothing to do with the actual crisis.

A reporter pointed out the inconvenient chronology of the “border crisis” explanation and asked Boehner about the many months of inaction that preceded the summer of 2014. In response, Boehner offered this flawless diamond of a non-answer: “I could regale you with all of my challenges of trying to get members on both sides of the aisle to deal with this. They were numerous. But hope springs eternal.” Wait – was it the border crisis that held him back, or one of the many unnamed “challenges” he faced, which he doesn’t want to bore us with because they reveal how little control he has over his own caucus they’re so boring?

All these immigration reform questions came in the context of a warning Boehner delivered to the White House on the president’s promised executive action. “I’ve made clear to the president,” Boehner said yesterday, “that if he acts unilaterally on his own, outside of his authority, he will poison the well and there will be no chance for immigration reform moving in this Congress. It’s as simple as that.” As far as threats go, this is a fairly empty one, given that Boehner’s demonstrated zero capacity to move reform through Congress.

But an intrepid reporter followed up and posited a hypothetical to Boenher: If the president promised not to act unilaterally, would he promise a vote on immigration reform? Here’s what Boehner said:

I want to talk to my members, but I’ve made my position very clear. It is time for the Congress of the United States to deal with a very difficult issue in our society. This immigration issue has become a political football over the last 10 years, or more. It’s just time to deal with it.

But more to the point: This is a ridiculous position Boehner’s put himself in. He’s trying to bully the White House by saying “if you don’t agree to do nothing, then we’re not going to do anything.” And at the same time he’s saying that even if the White House gives in to his threat, “doing nothing” is still very much an option for him.

The best the White House can get from Boehner is a waffling non-answer on whether he’d allow a vote on immigration reform. Given his history of broken promises, the nature of his caucus, and his long record of not allowing votes on immigration reform, he’s given them more than enough reason to completely ignore him and just go ahead with their plan for unilateral action.