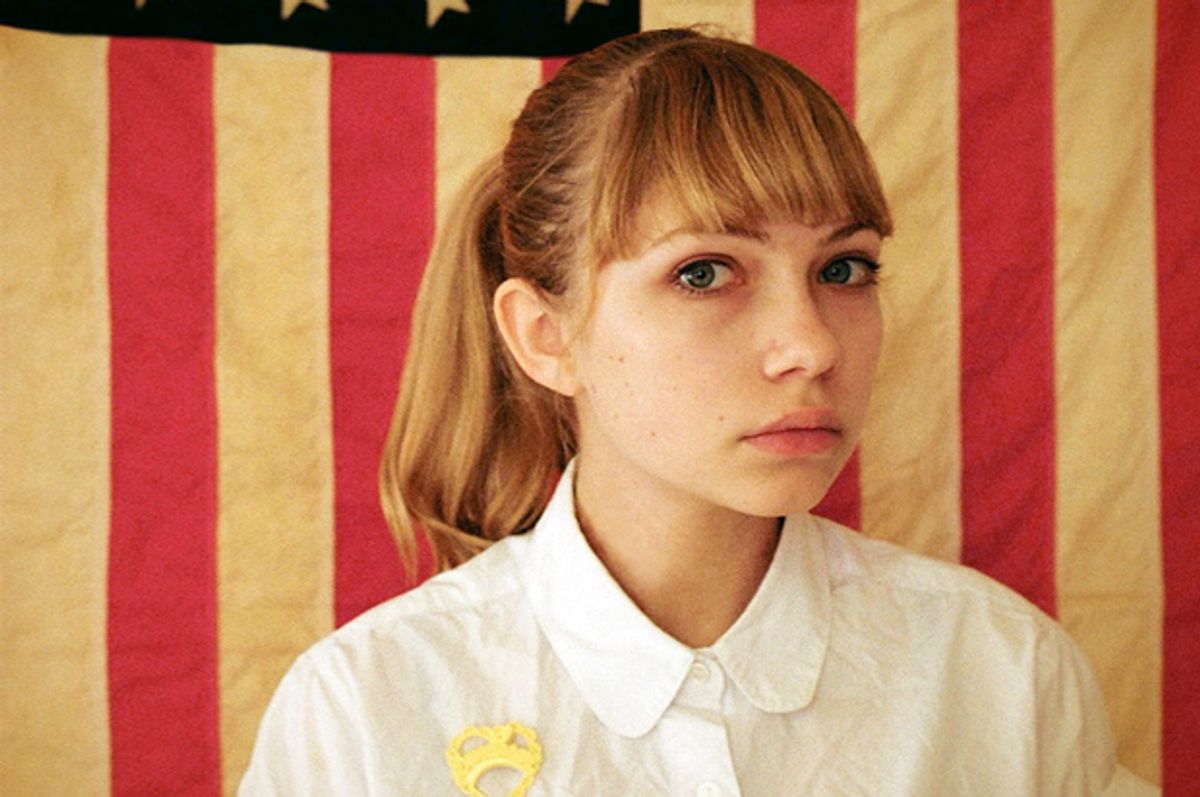 It was probably good luck that the Rookie Yearbook Three meetup was scheduled for the day after the 2014 midterms. I can’t imagine it was intentional, since maybe half of the girls at the Brooklyn event weren’t old enough to vote, but it still felt like something of an emotional palate cleanser. An example of a very good thing after an election night that seemed to confirm that, to quote political philosopher Billy Corgan, the world is, in fact, a vampire.

At the start of the evening, a half a dozen Rookies -- some in their 20s, others still in high school -- lined up to read their work. The stories ranged from ruminating on death and cotton candy as a 5-year-old to navigating identity as a biracial teen in an overwhelmingly white suburb. They were at turns funny and serious. Intentionally silly and acutely self-aware. Hugs were exchanged after each. Everyone seemed proud, connected.

For those who don't already know, Rookie is a website for teenage girls. More specifically, it's a platform for girls (and often women) to define their own narratives, ask questions, feel angry, revel in beautiful things and sit with uncomfortable ones. It’s like a really expansive menu of possibilities of how to be a person in the world, updated three times a day with lots of lovely pictures.

Taken as a whole, it's also a project in radical empathy. So maybe you're not struggling to find love in your crappy high school, or having a self-esteem crisis during potentially the most awkward phase of your life, or trying to put the pieces back together after the death of a parent, but some other Rookies are. And now you know them. And now they know you.

It is, in short, a book that you wish more people had. Since so much of what feels wrong right now stems from a profound lack of empathy and understanding, Rookie is something of an antidote.

I talked to Rookie editor in chief Tavi Gevinson about the book, feminism, life during her first year out of high school and the never-ending project of figuring yourself out. Our interview has been condensed and edited for clarity.

Rookie has so many contributors telling so many different stories, which has allowed for a really nuanced, really complicated narrative to develop about what it can mean to be a girl or a woman. I remember when “Girls” first came out, a lot of people grabbed on to and kind of weaponized this thing about the “voice of a generation,” as if the show was supposed to be that. It seems that Rookie has been able to avoid being swallowed into a similar media narrative of like, This is absolutely what it means to be a girl right now.

I remember having an in-school panic attack junior year because I was on my phone and there was some article asking, "Is Tavi Gevinson girl power's last hope?" And I was just like, Jesus Christ.

If I had wanted to keep writing about stuff that just pertains to me, I could have kept writing my blog. But I wanted to have this space where something larger could happen, and where other people could have a platform as well.

Part of what I think is so strong about Rookie is how it brings girls together and kind of presents them with a menu of options of how to be a person in the world. The site is obviously centered around the experiences of girls, but I’ve often wondered if boys are reading Rookie, too. If they're maybe looking for those same things.

When I started Rookie, I said it was for girls because I felt like boys already had their things. Let girls have something. I see now that I was taking on a very narrow definition of a boy and a girl. Now Rookie is for teenagers, I guess. We do hear from boys who are maybe more the kind of boys I thought that I created Rookie ... not to exclude, but whom I never ever had in mind as our readers. We will hear from them and they’ll be like, "I didn’t understand why girls get so upset about street harassment before and now I read this thing and I understand it and sympathize."

I guess there’s a lot of, I know now that I don’t get it, but that I should listen to and respect the people in my life who do deal with this. I mean, that happens in “South Park,” too. With Token. The dad, at the end of the episode, goes up to Token and says, "I get it! I don’t get it." And Token says, "Now you get it."

I feel like most of these issues, by letting people speak for themselves and understanding that if something is out of your wheelhouse or experience that someone else should be doing the talking … I feel like that’s a good path. Now when I write for Rookie it’s usually the editor's letter or addressing the theme or sharing something about my own life.

I read an interview where  you described yourself as a feminist-creative rather than an activist. And I think Rookie shares that, sort of lives feminism in ways that are really personal. But I wonder if you ever feel compelled, when something is very shitty in the world, to tell Rookies directly like, Here’s what you need to know about this issue.

I got a comment on my Instagram the other day saying that Rookie needs to have more information about voting. And I agreed, we should have done more with that. But then this person also said that girls need to know who sucks and who doesn’t.

But to that I was like, No no no no. I think our readers are smart enough that if you give them facts they can decide for themselves who they do and don’t want to vote for. I know my beliefs, but I’m not totally sure in my beliefs and they change a lot. And we have a staff of people, many who don’t identify as feminists for their own reasons. I want it to be a space where girls can fuck up and be inconsistent and they won’t be judged or policed for figuring all of this out.

So as tempting as it is to be like, I think Woody Allen molested his daughter ... Actually, in that case, we did say that we stood with Dylan [Farrow]. To me that came down less to my political beliefs and more just that a woman has spoken, a survivor has spoken. I choose to believe her. I think the way we talk about it publicly matters. I think it’s important not to graze over it or to doubt her or contribute to an environment that makes it difficult to speak out.

But I never wanted Rookie to be preachy. For me, I am a feminist because I believe in equality and that kind of naturally comes out in the things that I do, I would hope.

Rookie provides a real space for questioning and self-exploration, which can be such a hard thing to navigate as a teen, or really at any age. What kinds of art or books have helped you do that, to articulate something or know yourself in a way that you hadn’t been able to just yet?

A lot of the time, it’s Rookie. It’s not the stuff that I make. When my high school boyfriend and I broke up, I read all of the Rookie articles on breakups. And I was like, Ah, editor becomes reader! And I really felt I understood it in a more emotional way as opposed to an intellectual way. Just the human emotional aspect of it.

One thing I promised myself I would keep up after high school was journaling. When I was younger, when I saw a movie I liked, I would blog about it. When I stopped blogging and started Rookie, I started keeping a journal. I would write down every possible lesson that could be gleaned from the books I was reading or the movies I was seeing. And I promised myself I would keep doing that because I think that’s how you grow and learn about yourself. I didn’t want to let go of the part of myself that was a teenage obsessed fangirl.

“Franny and Zooey” was a gift to me, and a friend who inscribed it was like, "This book taught me how to live." And I don’t want to let go of that. At all. Rookie probably lays it out in a more straightforward way than in a piece of fiction or a movie. And we don’t have all the answers. But I think that when something rings true for you, you just know it, and hold on to it. And that’s what helps you become a person and to like yourself.

I feel like Rookie has a profile now where you have a certain degree of access to most of the people you’d want to talk to.

It’s nice because they like Rookie. A lot of people posted selfies when the book first came out. And I wrote everyone these really apologetic emails being like, "Can you take a selfie with our book?" And they all said yes.

There’s an air of people saying they wished it was around when they were younger. It’s really nice to have that support. Something has definitely happened in recent years where the line between the mainstream ... I mean, there’s no mainstream culture anymore. So when I started it was crazy to me that Mindy Kaling knew about Rookie. Now it’s really nice to feel like we are a necessary voice in all of this.

Before I started Rookie, things that were teen girl-related had to be defended. And not that my priority is the respect adults have for Rookie, because that’s pretty irrelevant, but it is nice that it exists and is taken seriously in this larger way. Obviously, though, the best thing is that it matters to its readers. There is literally no greater currency in this world than the earnest appreciation of a creation of any kind by a teenager. It’s the weirdest time in your life, and it sucks. So when you find something you identify with, it’s so magical. And I feel so deeply connected to all the things that blew my mind when I was 13. The first things you feel really understood by. If that’s all we got, even with one girl, that’s great.

Is there an interview or a person who you’re like, Come on, do "Ask a Grown Man!" Do something with us!

It would be cool if Bill Nye would do an "Ask a Grown Man." He’s with it. But, the day the Beyoncé interview happens, I’ll drop the mic. But then scurry back and pick the mic back up and keep working.