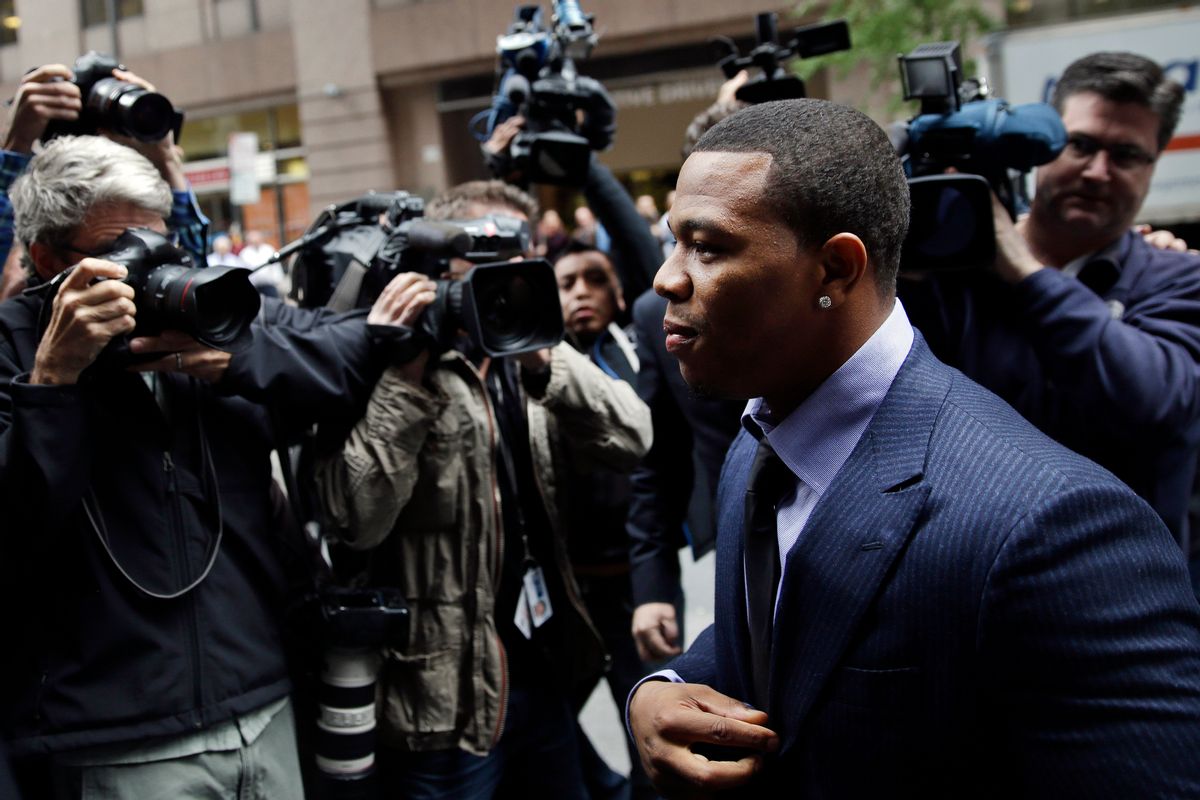 Ray Rice arrives for an appeal hearing of his indefinite suspension from the NFL, Wednesday, Nov. 5, 2014, in New York. (AP Photo/Seth Wenig) (AP)
--

Former Baltimore Ravens running back Ray Rice could be reinstated to the NFL any day now, after a two-day appeal of the league's decision to suspend him indefinitely wrapped up in New York on Thursday. Former U.S. district judge Barbara S. Jones presided over the hearing, during which the NFL Players' Association argued that Rice told league commissioner Roger Goodell during a June disciplinary hearing that he hit his partner, Janay Palmer.

During his testimony this week, Ravens general manager Ozzie Newsome echoed Rice's claim, contradicting what the NFL has long maintained: that Goodell didn't know full details of the assault until September, when he suspended Rice indefinitely. According to Outside the Lines, Newsome's testimony could be crucial to Rice's reinstatement, and to finally clarifying just how badly Goodell and the NFL bungled their investigation of the assault:

What occurred in the June 16 hearing is key to Rice's chances for reinstatement, sources said. He was suspended indefinitely Sept. 8 for violating the NFL's personal conduct policy after a video of him hitting Janay and knocking her out at an Atlantic City casino was released publicly.

Goodell originally had suspended the running back for two games.

Rice and the NFL Players Association contend the league's indefinite suspension constitutes an enhanced punishment for the same violation and thus violates labor law. The union also is arguing that the discipline of Rice by Goodell was inconsistent as it relates to the league's conduct policy. Rice is seeking immediate reinstatement.

Rice and his wife testified separately during the hearing this week, as did Goodell. All three testimonies have been sealed under a gag order Jones imposed, leaving open questions about whether Goodell has continued to maintain he was unaware of what happened in the casino elevator back in February. Several reports have indicated that the NFL was, in fact, aware that Rice attacked his partner, both because Rice admitted to the assault and because a law enforcement official released a copy of the security camera footage to the league.

There is no deadline for Jones to rule in the case, but Outside the Lines reports that the judge has requested final briefs from both the NFL and the players' association by next week.