Hollywood's diversity sham: How TV and movies save face by casting minority extras

Working on a TV set, I looked around and realized: Nearly all the minorities are in the background 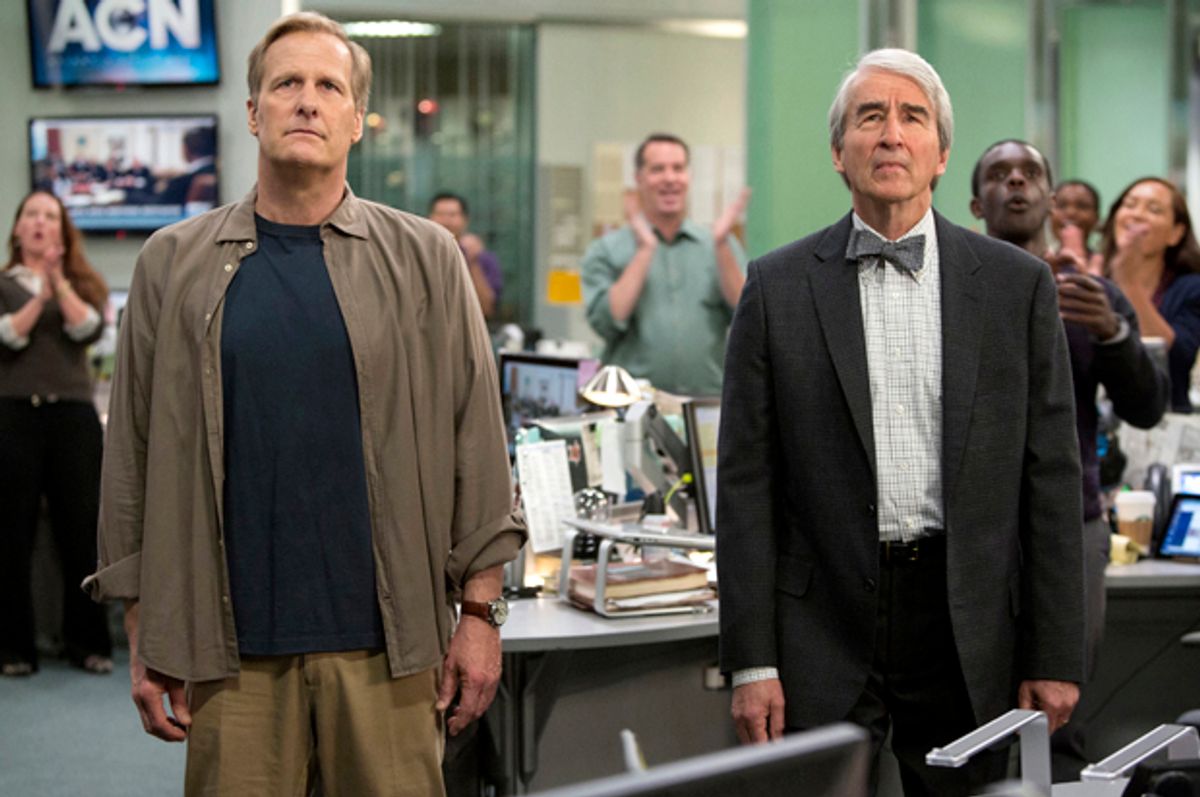 Jeff Daniels and Sam Waterston in "The Newsroom" (HBO)
--

In the spring of 2001, I got hired for one of my weirder media-related jobs. A documentarian by trade, I was brought on to an ABC television program called "The Beast," about World News Service, a fictional CNN-like news channel, where Frank Langella played the Ted Turner/Roger Ailes role as network owner/de facto program director, and Elizabeth Mitchell, Jason Gedrick and Naveen Andrews were the primary reporting talent.

Over the course of each episode, two major "news stories" would develop. The main set was a forest of TV screens, and shooting could not proceed unless those screens were filled with finished materials that reflected the developing plotlines.

My job was to edit together plausible snippets about nonexistent events out of a low-budget melange of archival footage, run-and gun video grabbed on the fly by the unit I was assigned to, and hastily created graphics packages, all designed to give the impression that both World News and its equally fictional network competitors were chasing down the riveting events at the heart of the week's drama.

The hours were insane--not an unusual story for anyone who's ever worked in TV or film production. Where the lead editor assigned to each episode might have two weeks and an editing assistant to deliver a 48-minute show, I was turning around five to eight minutes of finished material a day without assistance. I worked a 23-hour shift once, and then slept three hours and worked for 34 hours straight.

I was also a part of the main production unit--a unique situation for an editor, as became apparent when both Frank Langella (a prince) and Elizabeth Mitchell (genuinely sweet) stopped by to hang out in the edit bay on two separate occasions. My production epiphany didn't come from hanging out with the famous and nearly famous, though. It came from being housed near the background extras, who were a vital part of producing Imagine Entertainment's vision for the show.

Every shot was supposed to be filled with tension and energy, and that meant people rushing to and fro with papers in their hands or mouthing soundless and improvised dialogue into one of the era's boxy and frequently antennaed cell phones. Like me, the extras existed in some netherworld between their normal creative function as actors and the program's set decoration.

But unlike me, they were set decoration that looked like America.

Evenly divided by gender. Multi-ethnic to a carefully calibrated fault. Representing every ethnicity, at least as Hollywood imagines such things--meaning Asian, Latin American and African-American. In redundancy. And all on strategically prominent display.

The illusion was one of absolute inclusiveness. It was as if the camera, had it suddenly broken free of its narrative responsibilities, could follow a pair of extras down a hall, and reveal a World News media empire that was an adult variation on the old "Wee Pals" comic strip. Black, brown, male, female, Asian, Jewish, Native American and Chicano, all collaborating agreeably from positions of mutual respect, reward and influence.

To watch those extras move around behind Frank Langella as he looked fraught, barked orders, or made goo goo eyes at his character's love interest was to believe the millennium had come, at least to Big Media.

To work on that set, however--on a real program, produced by a major media company and aired on one of the biggest TV networks in the world--was to swim in a virtually unbroken sea of Caucasian-ness. With the exception of one personal assistant who was of Indian extraction, I can't remember a single non-white crewmember, in any position, small to large.

Let us give Imagine Entertainment its due. The main creative force on "The Beast" was producer/director Mimi Lederer, one of the few major female directors of that or any period. The principal cast was multi-ethnic, in that standard television way--i.e., where a trio of white leads in the foreground gets to demonstrate its open-mindedness by collaborating with a range of not-quite-as-prominent supporting players of various ethnic types.

Langella's African-American love interest was played by April Grace, in a kind of reprise of her role as the reporter who grilled Tom Cruise's evil Tony Robbins manqué Frank Mackey in PT Anderson's "Magnolia." It was an open secret on set that Grace wasn't happy playing the employee who was sleeping with the boss. Her starring episode--easily the best, the most culturally prescient and the most racially charged of the six that were shot--was the only one that never aired.

Had I been watching "The Beast" rather than working on it, I would have simply enjoyed what was a solid show with a lot of growth potential--vastly superior, at least in its thematic ambitions, to a bromide-driven number like Aaron Sorkin's "The Newsroom," which similarly uses extras to create a charade of diversity in casting.

But that disconnect--between the fantasyland of media inclusiveness I was helping to perpetrate and the actual environment I was going to work in--planted a troubling seed in my mind--one that has only fully sprouted recently, thanks to a series of academic studies about race and gender in media published throughout 2014, and as recently as a month ago.

Hollywood is pushing a dangerous fantasy, one that may even account for much of the widespread public acceptance of the equally dangerous myth that we live in post-racial times.

We know, if we care to, that young men of color still clog our court dockets and occupy our prisons in wildly disproportionate numbers. We also know, if we take the effort to look it up, that the majority of American judges are white and male. And we know, if we consume a lot of media, that our fellow citizens are not being given a sustained impression of ethnic bias in our policing, nor of white male authority as the face of our judiciary, when they hit Netflix or turn on their TV.

It can be argued--and I myself would make the argument--that the allegedly "liberal" Hollywood creative community is kidding itself if it thinks casting Reggie Baker as "the Judge" is some kind of progressive statement. And it's a problem when the actual stories these multi-racial authority figures are marginally involved in are still mostly of, by and about white guys, whose rightful place at the center of the cosmos is validated every time one of them rubs up against a wise old ethnic judge, played by an actor who gets twelfth (or guest star) billing.

Earlier this year, UCLA's Ralph J. Bunche Center for African American Studies published a groundbreaking and authoritative study on ethnic and gender diversity both behind and in front of the camera. Researchers used 2013 production stats (the most recent complete data set) to conclude not only that Hollywood product is completely out of sync with the ethnic make-up of America but that studio hiring practices are amongst the more racist and sexist of any of the major American industries.

Behind the camera, where the UCLA study focused on major creative positions rather than entire film crews, the situation is even worse. As film directors, minorities are underrepresented by a factor of three to one. Screenwriters? Five to one. Writers for cable TV? Also five to one. And as creators of broadcast dramas and comedies (in other words, of shows like "The Beast"), the ratio of underrepresentation is a startling nine to one.

I'm not trying to get Reggie Baker to stop playing judges, exactly. And I certainly wouldn't want TV shows to stop casting minorities as extras. But this shouldn't be an easy fix for Hollywood's diversity problem. The epiphany I had one day on the set of a forgotten TV series was about how easy it is for a media company to use the face it shows to the world to send one message, while utilizing the power it wields behind the scenes to serve quite another.

RH Greene is a Los Angeles-based broadcaster and documentarian. His most recent documentary feature is the film "Vampira and Me."