In the superhero world, just because your body was ripped in half doesn't mean you can't make a comeback 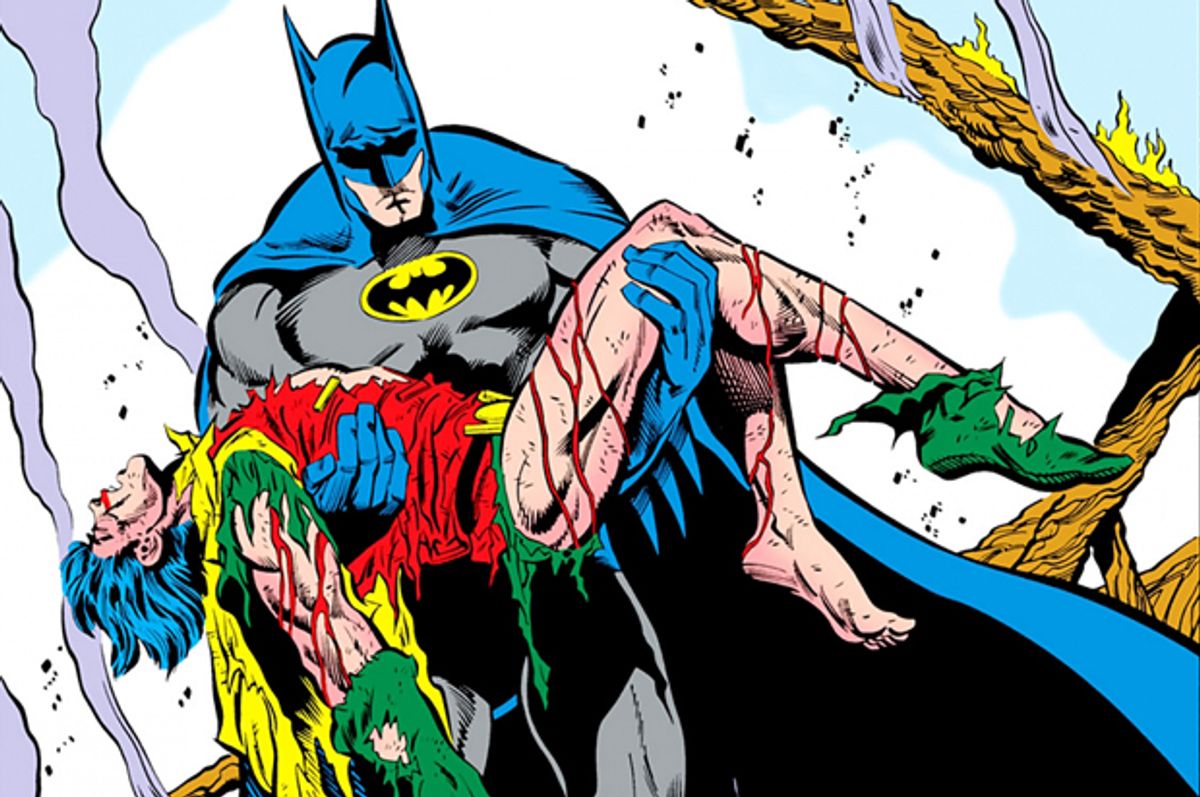 If you’re not up on your comic plots, I have some bad news: Wolverine is dead. He was recently killed in the uncreatively named series “The Death of Wolverine.”

The question: When will he be brought back, and in how ridiculous a manner?

Death in comic books is notoriously silly, a stunt used to grab publicity and spike sales. Sure, some comic deaths are sacred—like Bruce Wayne’s parents and Peter Parker’s Uncle Ben—but they weren’t superheroes. Most superhero deaths are as temporary as a rash. Even if you’re dead for decades—like the Flash and Bucky—your return is assured. This is probably the best reason to be a superhero. If you don the spandex and sell enough comics, you’re pretty much guaranteed immortality.

In recognition of Wolverine’s inevitable return and the crass and goofy tradition of superhero deaths and resurrections, here’s a look at some of the most preposterous demises and returns ever, which include clones, magic guns, alternate realities and brain-swapping octobots.

After “X-Men 137,” this would have been the death least likely to be considered ridiculous. Jean Grey bravely sacrificed her life so the Phoenix force couldn’t possess her anymore. That was a reasonable, wise decision: during one possession, Jean wiped out an inhabited planet. If genocide and suicide sound a little heavy for superhero comics, you’re right, but back in the '80s, Chris Claremont and John Byrne could do little wrong on this engrossing and popular series. The death of Jean Grey was one of the noblest things that ever happened in comics, and also one of the most tragic. So, of course, Marvel reversed it, coming up with a cockamamie explanation that the Jean Grey who died wasn’t the real Jean Grey, who had been napping in an undersea cocoon all this time. By the hammer of Thor, this was bad. To add insult to inanity, Jean has died again since then.

The death of the second Robin—Jason Todd—is unique to say the least. Though he was beaten with a crowbar, and then blown up, by the Joker in “Death in the Family,” the true perpetrators were fans. DC had phone lines set up where fans could decide whether or not to kill the unpopular character, and they voted for death. No elections were held regarding the inevitable return of Jason Todd, which occurred thanks to DC’s most commonly used resurrection McGuffin, the Lazarus Pit.

Captain America’s World War II partner Bucky Barnes was long considered one of those deaths you couldn’t/shouldn’t reverse--until Ed Brubaker and Steve Epting’s remarkable run on Cap. Their revival story was elaborate, but not cheap. It turns out Bucky was found by the Russians after he plummeted from the exploding plane that also sent Captain America into the drink. Bucky was resuscitated, brainwashed, given a metal arm and used to carry out assassinations throughout the Cold War. Between missions, he went back on ice to preserve his youthful looks and girlish figure. This story was the basis of “Captain America: The Winter Soldier,” which I reckon is one of the three best superhero flicks ever. The return of Bucky is a rarity: a great story rather than a desperate stunt.

Issue 99 of “Invincible” is an enormous brawl between the title character and his nemesis/partner Dinosaurus: an absurdly named lizard-type villain who just melted some glaciers in an attempt to flood the world and reduce the population to a number healthier for the planet. On page 1 of issue 100, Dinosaurus smushes Invincible’s head. On page 2, he rips Invincible’s body in half. (FYI, these gross acts are drawn in typically amazing, gory style by Ryan Ottley.) How did Invincible survive that? Through a time-worn gimmick: Dinosaurus actually killed a clone. When in doubt, break glass, use clone.

One of the most recent “deaths” of a major superhero wasn’t really a death at all: Spider-Man was merely the victim of a brain switcheroo by his longtime nemesis Dr. Octopus, who was dying. Octopus did die—with the mind of Peter Parker—leaving Doc Ock as the so-called Superior Spider-Man, who tried to be a hero but couldn’t resist using mustache-twirling, evil-robot-deploying methods. This was an easy death to reverse, since Peter’s body never died; writer Dan Slott just needed to show that some vestige of Peter remained in his body, and that vestige eventually kicked the mind-squatter Dr. Octopus out. Speaking of Spider-Man, his girlfriend Gwen Stacy has returned twice in a way that doesn’t reverse her heartbreaking death at the hands of the Green Goblin: through alternate universes. Gwen actually outlived Peter Parker in Marvel’s Ultimate Universe, and she became Spider-Woman in another alternate universe. The recently introduced “Spider-Gwen”  was an immediate hit who is getting her own series.

At the end of “Final Crisis,” Batman does something very un-Batmanlike: he fires a gun, killing Darkseid. As he fires, Darkseid’s omega effect strikes Batman, killing him. We soon see Superman holding a cowled corpse. But Darkseid didn’t kill Batman at all: he sent him hurtling through time for nefarious Darkseid purposes. Batman then has his most bizarre series of adventures ever in “The Return of Bruce Wayne,” as he flip-flops through time. Our amnesiac hero fights cowboys, 30s-style mobsters, Blackbeard and witch hunters, before finally ending up back in his own time. Bizarrely, Captain America returned from the dead in a similar way at about the same time. At first, Cap’s death seemed somewhat legit, as he was shot in the aftermath of Marvel’s Civil War. Eventually, it was revealed that Cap was hit with a magic gun that sent him back through time, helplessly reliving moments from his life.

Speaking of “Final Crisis,” that Grant Morrison epic not only “killed” Batman: it brought back Barry Allen, the original—er, second Flash. Allen had died back in 1985 during “Crisis on Infinite Earths,” DC’s first mega-event and one of the few that has ever had any actual significance. Allen foiled the Anti-Monitor but ran so fast that his body was destroyed. Or so it seemed. Barry Allen rejoined his Flash predecessor Jay Garrick and successor Wally West after being dead for over two decades of our time, offering this explanation: “An unknown force just reverse-engineered me to life out of a blizzard of faster-than-life particles.” Well, obviously.