Why millennials pulled a disappearing act on Election Day

Younger voters aren't disengaged. Their faith in our institutions is at an all-time low, and with good reason 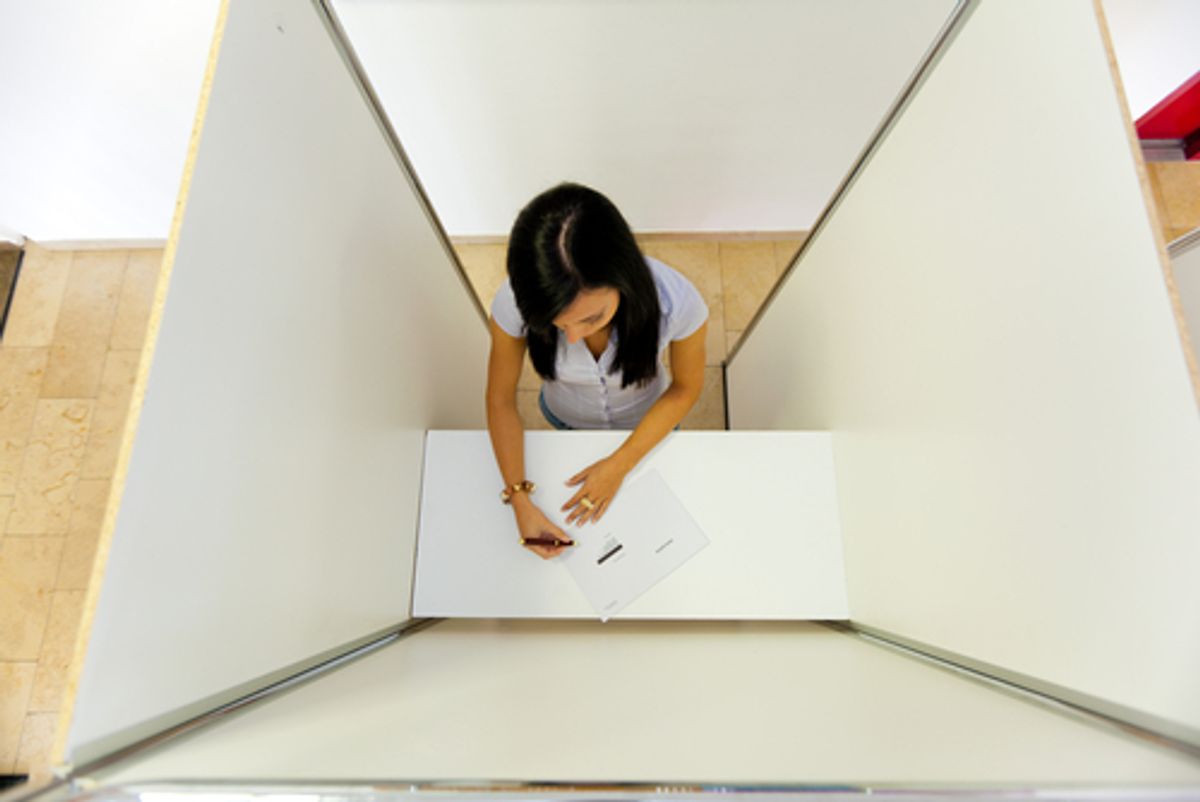 As pundits predicted (Nate Silver really has taken the drama out of election returns) the Republicans swept to a classic 6th year victory, winning senate and gubernatorial majorities on the backs of disillusionment with Obama and low turnout across the board. Also as predicted, young voters’ share of the electorate dropped: from 19 percent in 2012 to 13 percent this year. This pretty much mirrors the turnout in the last two midterm elections, and we can safely call this a trend in Millennial political engagement.

I'm not going to spend time trying to debunk the notion of Millennials as lazy or disengaged. I don't buy those narratives, either anecdotally or statistically, but what's important today is that we've seen the confirmation of a very dangerous trend: this moment of low turnout is perfectly in line with an all-time low in people's faith in our institutions of government.  If what we want from voting is for people to engage more with the rules that govern their lives, we need to make the process of engaging much more meaningful that what currently passes as voting.

I can't blame us, either. The connection between voting and positive change has never been so tenuous. The elimination of section 5 of the Voting Rights Act has opened the door for disenfranchisement movements around the country, and there will be more felons prevented from voting in Georgia then the entire Alaskan electorate (who, by the way, still got to pick a senator). Money, as the Daily Show observed, pretty roundly trumped ideas in this election. Even worse, zooming further out reveals a federal government that seems pathologically incapable of doing anything at all. Why should we care that the senate swung red, or a congressional seat remained blue? We have passionate debates about global warming, about immigration, and about how to fix a healthcare system and an economy that both leave out large numbers of Americans, but when we get to the ballot box those debates seem very removed. How do you know if your vote is a vote for a carbon cap-and-trade program, or against gun control? You don't, and you can't, because the systems that govern our democracy are simply not that responsive.

While I've heard plenty of arguments that yes, this is how representative democracy is supposed to work, it seems to me that we risk a generation of voters systemically having their worst fears and cynicism (and thus disengagement) re-enforced by real results.

It's a real problem. So what?

My title at the Roosevelt Institute is “Associate Director of Networked Initiatives.” I often end up trying to explain to people what, exactly, that means. Sometimes I'm not sure myself. But if we know that traditional institutions - from Beltway politics to social structures - are crumbling, then how can we take that knowledge and make something positive from it?  So the challenge of my position at Roosevelt is to figure out how organizations that already exist, and those that are starting every day, can work independently while being a part of a network.

In this, there is a vision for how we think about political parties. Not as top down institutions, but as networks of people who support and push each other toward social change, and then are moved to vote as a part of the process they are already engaged in.

We know that Millennials are civically minded from extensive polling. We are interested in starting our own organizations, and are passionate about many issues. This is not, simply put, a generation that has checked out on change. We're running divestment campaigns, we're starting non-profits, and we're throwing ourselves into the breach as teachers. But with so much re-inventing of the wheel, the Millennial generation's activism is not reaching the scale that we need.

For our Federal government to work at all, we need people to buy in as voters. We need people to show up, to use voting as a starting point, and to assist on projects for the greater good. What if, instead of looking for people to joining the organizations that already exist to build to federal levels of power, we were looking instead for an affiliation of organizations? We are, at this point in our technological history, capable of communications structures and consensus building that is far more complex and more nuanced than it has ever been. And we're also at a point where simply repeating the same tired political process is not just not working, it's actively driving people away.

I am not suggesting creating a loose coalition of organizations, where people sign off on national legislation, or add their votes to other people's petitions. Roosevelt is a network in the sense of communicating between different nodes: active sharing of ideas and information and resources, as well as shared problem solving, to go along with the combined sense of purpose, and shared values. Imagine with me, a party that recruited organizations that already existed, without trying to change their mission. Education organizations, environmental groups, crowdfunding platforms, and better business bureaus with a shared set of values, sharing their work and collaborating with each other. Imagine a network, in the truest sense, that takes what is the same about local problems and elevates the core issues to a national platform, while giving each local group the agency to tackle things the way they need to be tackled. Instead of making voting the core part of how we engage as active citizens, let's make it an end product for engaged people who realize that they've reached the logical end of what they can do locally, and thus need to pass some power up the chain to a Federal government that is ready and waiting.

There was a glimmer of this process in last night, with organizations that were able to move important issues like minimum wage hikes in Nebraska and South Dakota and soda taxes in Berkeley. A network of organizations that supports local groups, finds candidates that share similar values, and passes on best practices? That sounds like a network that Millennials are already engaged in.

Today, America is angry at Millennials for not voting. Instead, I would suggest that we should be angry at an American government that has passed on actual democratic principles in exchange for the consolidation of power. I think Millennials are smart enough to see this, and that we're building different civic infrastructures, some of which will eventually grow to scale.

Could political parties be one of these things? Maybe. But they would need to embrace the grassroots, and stop worrying so much if that means getting some grass stains on their message.