"Indiana Jones would be considered a looter": Why we're obsessed with glamorizing archaeologists

The lives of real archaeologists are even stranger than fiction, and a whole lot harder 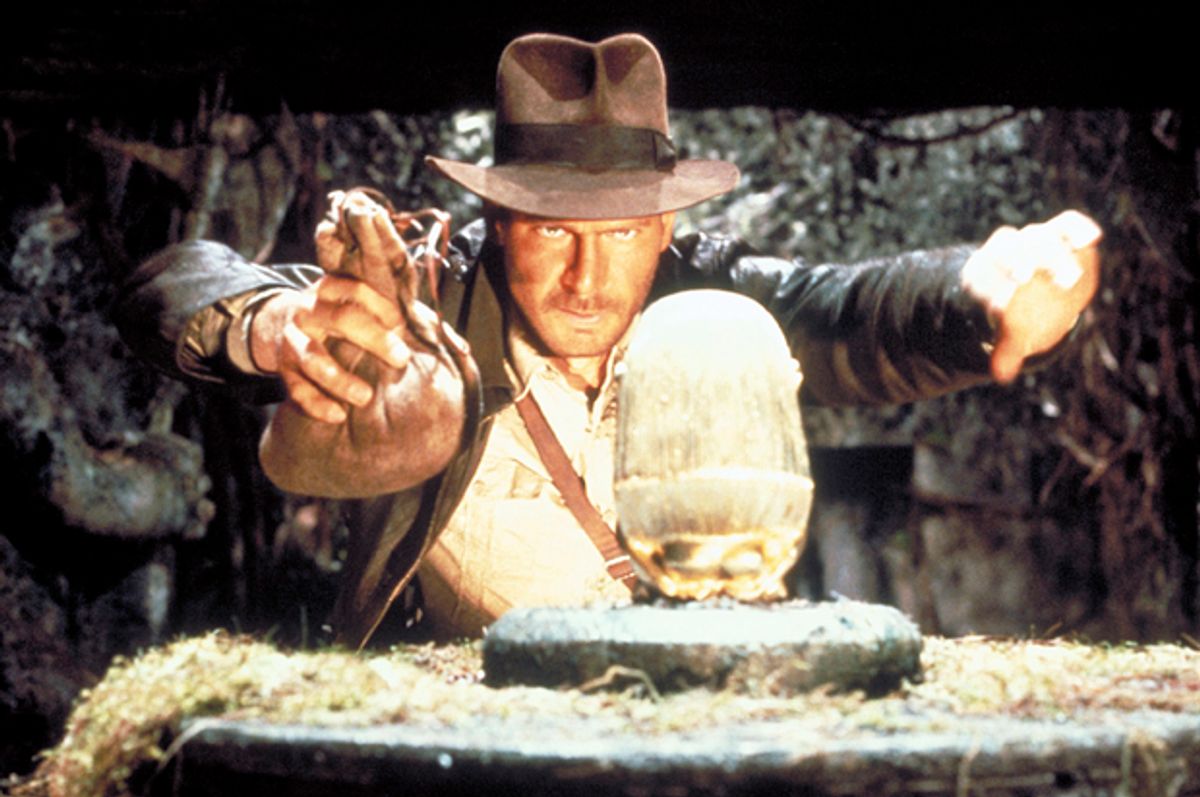 Several years ago, while researching a story on biblical archaeology, I had the chance to talk to a leader in the field by telephone. At one point, he kindly provided me with a lengthy explanation of pottery seriation, the means by which archaeologists track the history of a particular site. Styles of pottery change over time and vary from culture to culture, so if an archaeologist excavating a heap of broken shards encounters a layer of pieces radically different from the one below it, it's likely a sign that a new population had moved in. "I'm sorry," the archaeologist laughed when he finished. "It's pretty boring."

To the contrary. "I get paid to look at people's trash" said one of the itinerant archaeologists interviewed by Marilyn Johnson for her new book, "Lives in Ruins: Archaeologists and the Seductive Lure of Human Rubble," and she wasn't wrong. The man who told me about pottery seriation has spent his life studying broken crockery, after all. But the great and undying magic of archaeology is just how much ancient rubbish can tell us. Sherlock Holmes may have used his encyclopedic knowledge of tobacco ash to catch criminals, but archaeologists can use animal teeth and plant seeds to change our understanding of the world.

Biblical archaeology is part of an intellectual project over two centuries old, one that has attempted to establish just how much of the Old Testament is an accurate representation of the history of ancient Israel and Judah. This project was challenging the literalist interpretation of the Bible long before Charles Darwin came along. As Johnson puts it, "to the archaeologist, treasure is something that was buried that has been brought to light, a pebble of information around which the narrative of history now needs to bend."

The archaeologists Johnson visited while researching her book worked in Peru, Cyprus, the Caribbean and upstate New York, among other places. Perhaps the most glamorous of the bunch, NYU's Joan Breton Connelly, has dedicated her life to excavating a tiny island in the Mediterranean topped by a temple to Apollo that Connelly believes was built by Cleopatra. Her less celebrated counterparts include Bill Sandy, a "contract archaeologist" (brought in to survey a piece of land in advance of development), who was hired to check out the site of a proposed strip mall in Fishkill, New York. Underneath the top layer of soil he found what would turn out to be "the largest cemetery of Revolutionary War soldiers in the country." It had been completely forgotten in the historical record.

Yet that plot of land in Fishkill, not far from Route 9, near the location of a major supply depot for the Continental Army, remains in a state of limbo. Development can't proceed, obviously, but no preservationist organization has stepped forward to buy the lot, let alone fund further excavation. On Memorial Day in 2011, Johnson found herself standing in the weeds with Sandy and a few dozen other faithful, honoring the ordinary, unsung men buried there, all of whom died for this country.

That's the real flip side of the dashing image of Indiana Jones -- a character archaeologists adore to the degree that they gave Harrison Ford an award "for Public Service to Archaeology." It's not the fact that, rather than battling Nazis, actual archaeologists spend most of their time grubbing around in the dirt. (You "have to be an earth whisperer" Connelly told the author after rhapsodizing about the various colors of soil.) The real difference is that almost nobody wants to pay archaeologists, and half of them are out of work.

Still, we love them. One of the more gainfully employed people Johnson interviewed works for the Department of Defense, designing training programs to help soldiers avoid destroying cultural treasures. (The program was founded after the infamous looting of the National Museum of Iraq in 2003 and, a year later, the inadvertent bulldozing of the site of an ancient temple by U.S. troops setting up a base.) This archaeologist told Johnson that the military officials she works for were thrilled to have her onboard, even when she discovered a "sacred Native American site" on their artillery range in Fort Drum and they had to set part of it aside. "My bosses," the woman reported, "say 'This is so exciting,' or 'My wife is Native American,' or 'We watch the Discovery Channel at home.'"

Don't we all? The few chances I've had to interview archaeologists for my work have been far more fascinating to me that talking to any writer. And I'm a literary critic. Archaeologists are as masterful in their deductions as the great fictional detectives and can be as brave as Indy himself. They do sometimes get shot at -- sites might be located in war zones, or targeted by thieves seeking valuable antiquities -- and there is the occasional poisonous snake, but the real peril comes from insects, especially mosquitoes, and the myriad diseases they carry. When Johnson enlisted in "field school" (essentially the paid internships of archaeology, only the students shell out for the privilege of working in grueling conditions, sleeping in tents and eating bad food) on the Caribbean island of St. Eustatius, her team got chased off a mountain by killer bees.

Mostly, however, archaeologists are broke. Dr. Kathy Abbass, the woman who founded the Rhode Island Marine Archaeology Project to study 13 French ships sunk by the British in Newport Harbor (one of them most likely the ship sailed by Captain Cook during his celebrated expeditions), at first supported herself by working as a housecleaner. She hasn't had health insurance in over 20 years and currently survives on an income of $1,000 per month, some of which includes Social Security checks because she is nearly 70. "I had more disposable income when I was graduate student," she told Johnson. Forget crystal skulls and fabled treasures, because no one gets to keep that stuff anymore: "These days, Indiana Jones would be considered a looter."

Among the people Johnson got to meet: A guy who replicates stone tools and practices throwing prehistoric spears at dead deer; a forensics specialist who once got to blow up a bus full of (also dead) farm animals complete with clothes and IDs so her team could practice remains-recovery in the aftermath of a terrorist attack; a woman who studied the various ways people have bound and reshaped infants' skulls over the millennia; and a feminist pioneer in the archaeology of Asia whose specialty is "pig dragons" -- a kind of Chinese pendant -- and who writes archaeologically themed novels. She also hung out with Patrick McGovern, described in the press as "the Indiana Jones of Ancient Ales, Wines and Extreme Beverages," who persuaded a microbrewery to help him reverse engineer a fermented drink whose residue he scraped out of bronze vessels found in a Turkish tomb. Johnson reports that the result, Midas Touch (Midas was the king buried there), is a blend of honey, white Muscat grape and saffron. And delicious: "If beer is liquid bread, Midas Touch is liquid pound cake."

As you might guess from these snippets, "Lives in Ruins" is itself pretty delectable, a Midas Touch for the wannabe archaeologist's soul. It's interesting to learn that a grave that's always wet (like the peat bogs of Ireland) or always dry (like Egyptian tombs) are equally "good for preservation," but that graves that alternate are an archaeologist's despair. Or that if you persist in pursuing a career in this quixotic profession, you had best learn to scuba dive, since most of the world's best sites are underwater.

But mostly you will learn that for all we romanticize and envy archaeologists (one told Johnson that she routinely finds herself at parties surrounded by MDs who want to hear all about her work), they're not so different from artists and writers. Most labor in obscurity for pitiful wages, in places much harsher than Brooklyn and for societies that consistently underfund their work. "We dig wherever there is a hole," a plaintive Argentinian archaeologist told Johnson. Many of them would do it even if they didn't get paid. When you get right down to it, they're also chasing the meaning of life in their way -- figuring out what matters to people, whether it's brewing beer, building a pyramid that tracks the path of the sun or raising a pointy-headed baby -- and that has never been a cushy gig.