The end-of-the-world diet: Inside the crazy world of survivalist cuisine

Ebola, ISIS, global warming: There's never been a better time to be in the survival business. Here's what's on sale 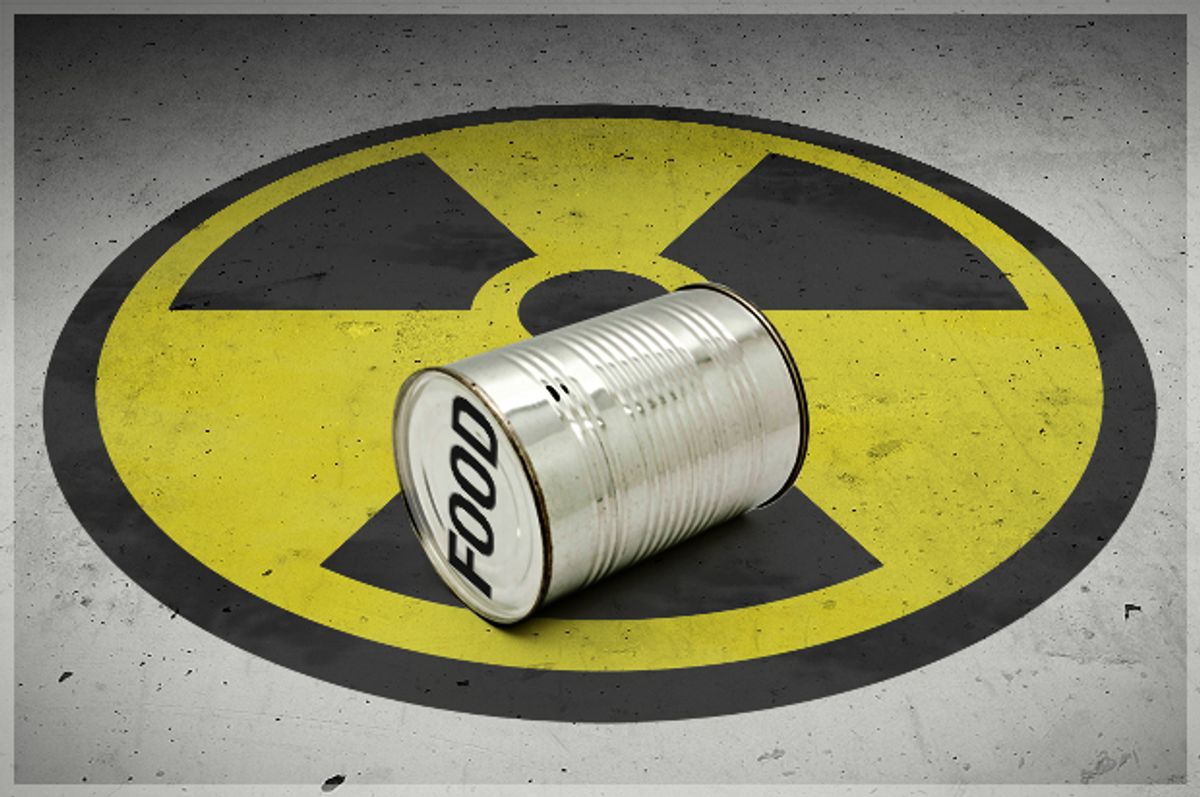 There’s never been a better time to stock up on food for your bunker.

Back when “prepping” was called “survivalism,” it was basically about guns and gear, but these days there are all kinds of domestic accessories and supplies for sale as well: “preparedness seeds,” hand-cranked water purifiers, sun cookers – and food. There are at least  a dozen companies selling food for long-term storage, from military rations to shrimp gumbo. It’s hard to imagine dry cat food going bad -- what would that possibly smell like? -- but Pet’s Banquet sells a dehydrated version it claims will keep for 15 years. At Wal-Mart, you can buy a one-year food supply for a family of four for $3,360.86. The emergency food business is booming.

“Sales have been crazy,” said Saul Meshkin, owner of XMRE, which packages and sells meals, ready-to-eat, like the ones issued to U.S. troops. “I don’t know if it’s because of the Ebola warnings, but we’ve almost tripled sales this month from the past month.” Mountain House, which used to make food almost exclusively for the outdoors market, now does about 50 percent of its business in emergency supplies, according to marketing director Reiner Bohlen. That got started after Katrina. “It was practically overnight,” Bohlen said. “People saw that something like this can happen to you. Everybody wanted to be prepared.”

I’m opposed to prepping, both philosophically (I think people should plan to help each other in an emergency rather than just preparing their own bunkers) and temperamentally (I’m lazy). But still … you never know. If society breaks down, I don’t want to be the only one living on ketchup while everyone else gets turkey tetrazzini and chocolate pudding. I decided to try some of this emergency food, so I got on the phone and got samples from as many companies as possible. If I was going to be eating this food for weeks, months – possibly the rest of my life – I should choose my brand carefully.

The boxes arrived promptly, from Lindon Farms, Wise Food Company, Food Supply Depot, Mountain House and XMRE. The first thing you notice about emergency-storage food is that it’s the only kind you ever find – with the exception of bodybuilder drinks – that actually boasts about how many calories it has.

“Get full. Go farther. More calories per serving,” reads the copy on Food Supply Depot’s website. It makes sense. “In a grid-down scenario,” said Lisa Bedford, author of "Survival Mom," “you’d have to walk everywhere. You’d be exerting a lot more energy, so what do you do for calories?”

Paleo, Atkins and gluten-free diets will thankfully be the first casualties of any national emergency. Calories are good. Carbs are good. I felt grateful to the generous people at Lindon Farms, who sent me two pails of food, one full of nothing but freeze-dried fruit, the other packed with a possibly lifesaving quantity of good old American obesity fuel: mac and cheese, broccoli cheddar soup, cheese sauce. I counted 30,000 calories in that pail. Other brands’ offerings were similarly heavy and starchy. There were two kinds of beef stroganoff, rice and beans, multiple chilis and pasta dishes. I also got to sample snacks, desserts, appetizers, cereal and side dishes – entire menus of freeze-dried and dehydrated delicacies, literally from soup to nuts. I recruited a few friends to help me conduct a taste test.

The results? Well, the simpler fare was best. MRE peanut butter was, to me, indistinguishable from Jif. Wise Foods’ strawberry granola, although supposedly best when reconstituted with water, was strangely addictive right out of the bag. Other dishes also surpassed expectations. Two soups – Lindon Farms’ cheddar broccoli and Food Supply Depot’s beef with vegetables – both had plenty of flavor, as did the MRE chili, which tasted pretty much like Hormel’s. Both stroganoffs were rich and creamy. The most ambitious offering, Mountain House’s sweet and sour pork with rice, was probably my favorite, approximating sugary takeout Chinese pretty well, right down to the pineapples. Their raspberry crumble dessert was also palatable, although the texture was a little gluey –  “like hot jam,” as one taster put it. Duds included Wise Food’s cheesy lasagna, which was, first of all, pourable, and therefore not lasagna, and also had a weird, rancid flavor, and the MRE oatmeal cookie, in which our tasters detected notes of “sweet plastic,” and “metal.”

In general, this emergency food really isn’t bad. It just doesn’t taste like regular food. It all has a certain laboratory flavor, that artificially mouth-watering quality shared by, for example, Cool Ranch Doritos, Chef Boyardee spaghetti and meatballs, and Mrs. Field’s cookies. Like a new-car smell. The texture of the entrées is also a little funny, especially the meat. It’s impossible to tell the real beef and pork from the vegetarian imitations: Both have that tempeh toughness. But, in general, most of this stuff was surprisingly tasty. In the end, the nod went to the high-end Mountain House, with XMRE a close second.

Mountain House’s stroganoff costs $7.50 for two and a half servings. Other brands are only a little cheaper. It’s a lot more expensive than lentils and rice. You’re paying extra for the long-lasting quality, and a good deal of R&D goes into preparation and packaging. Most emergency meals include a mixture of freeze-dried and dehydrated ingredients. Freeze-dried food is frozen and then put into a vacuum chamber, where the liquid turns directly from solid to gaseous, a process known as sublimation. The food keeps its shape and loses almost all its moisture. It really works: Freeze-dried raspberries are the size, shape and color of fresh ones, and so dry that when you open the bag a kind of raspberry dust blows up and makes you cough. Dehydration, on the other hand, tends to sap some of the food’s color and flavor but also shrinks it and makes it easy to store. MRE food isn’t dried at all, but cooked and sealed directly into plastic and foil pouches (“like a flexible can,” says Meshkin), which are then pressure-cooked to kill microbes and extend shelf life. Other companies also have their own pouches, and a certain amount of proprietary technology goes into them: seven-layer structures, trademarked Mylar foil. Norm Jager, head of R&D at Mountain House, told me that its pouch foods last 12 years. The gold standard, though, is still cans. Rodents can’t bite their way in, and the iron in the can absorbs oxygen and keeps the food from going rancid. “Over the summer,” said Jager, “we tasted some 35-year-old canned spaghetti with meat sauce that was delicious.”

For the most part, these emergency meals are not marketed as bunker food. Lindon Farms' website is done in gauzy, homemaker-friendly hues. “We live in uncertain times,” reads the copy at the bottom of the page. This is about as close as any of the companies’ websites or reps would come to suggesting their products would be useful in the event of apocalypse. They clearly want to expand their market beyond hardcore preppers. Rich Bliss, co-founder of the Ready Project, which manufacturers and sells Lindon Farms and other brands, told me that most of its customers were worried about economic uncertainty, not doomsday.

“Preparedness is just everyday living in most places in the world,” Bliss said. “In the U.S., I think we’re seeing a return to that.”

But why, exactly, would you need a year’s supply of food – sealed, dehydrated and guaranteed to last for up to 30 years – to prepare for anything other than the collapse of society? It’s like saying you need an AR-15 to hunt deer. Self-reliance is certainly a good thing, but the thought of all these people quietly stockpiling food makes me nervous, as if a percentage of the population were slowly backing out of society. Preppers will tell you pretty openly that they don’t trust their government or their neighbors.

“Look what people do just for fun, when they have full stomachs,” Lisa Bedford, the Survival Mom, told me. If there’s a real emergency, “you better believe they’ll be crawling over those fences and walls” to try to get what you have.

“We are nine meals away from anarchy,” agreed Vince Finelli, who runs the USA Prepares Prepper Expo. “You think people will be friendly and nice if they’re hungry? If you’re a policeman, would you go to work?”

In fact, I like to think I would. Isn’t that sort of the point of being a policeman? But most preppers think it would be foolhardy to believe this. Better to have guns handy, along with plenty of food. Bedford recommends storing ingredients, rather than ready-made meals, since they offer so many possible menus.

It would be amazing. And if you had been buying Pet’s Banquet, the cat wouldn’t even have to switch brands after the grid went down. I didn’t get to try Thrive Life, but I’ll bet its butternut squash is pretty good. Prepper food is OK. The philosophy is still a little hard to swallow.